Second-screen experiences have staying power among younger generations of TV and movie viewers. According to Statista, 46.7 million U.S. viewers regularly used companion apps while they watched TV in 2016, and Nielson reports that 45 percent of people “often” or “always” use smartphones, tablets, or other mobile devices while consuming media.

That’s music to the ears of content providers. In theory, second-screen apps provide a ratings-boosting, revenue-driving secondary engagement channel, but building those apps requires skill. Fortunately, it is expertise New York startup Applicaster is more than willing to provide.

Applicaster today revealed that it has secured $20 million in funding led by Viola Growth, with participation from 83 North, Pitango, Saban Ventures, and Planven Investments. The startup also announced the appointment of former Nokia VP of business development Jim Bennette to VP of sales and Ooyala veteran Mark Cokes to VP of marketing. This latest funding round brings Applicaster’s total raised to about $30 million, following a $10.5 million series B in 2015 and a year in which annual recurring revenue increased 100 percent year-over-year.

CEO Jonathan Laor, who cofounded the company with Neer Friedman in 2011, said the fresh capital will be used to expand Applicaster’s global footprint and product capabilities. “In the past year, we’ve seen tremendous growth,” he added. “As the public continues to consume content in various ways — whether that’s on a TV screen, through a mobile app or widget — brands must consider how to reach longstanding and new audiences in creative ways. At Applicaster, we’re eager to continue working with content providers to ultimately ensure viewers are engaged and receptive.” 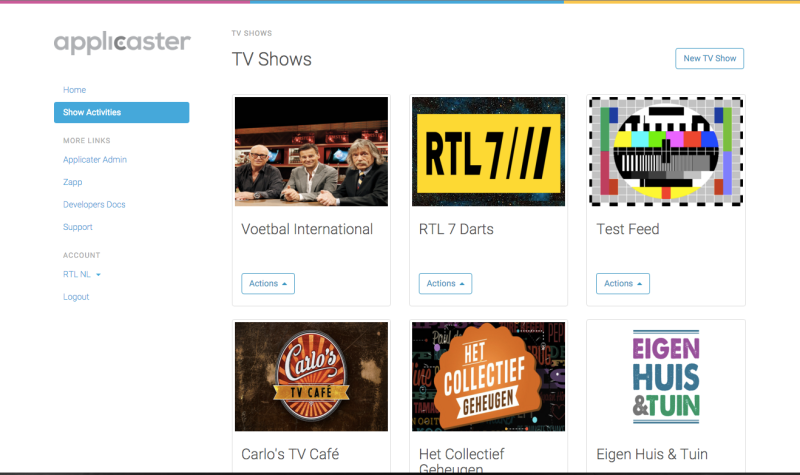 Zapp competes with like solutions from Oxagile and Vobile, but Laor contends that the platform’s robustness has given Applicaster a leg up when it comes to client acquisition. Its customer base is mix of high-profile cable and satellite providers, sports organizations, and broadcasters — among them the New York Giants, ProSiebenSat.1, DirecTV, Dish, BabyTV, Fox International, Time Warner, Kwesé, RCN, Medcom, and Elite Spain.

And Zapp’s got the testimonials to back up those claims. Applicaster helped boost downloads of Dish Nation, a companion app for Dish Network’s Fox-syndicated TV show of the same name, by 2080 percent and increase average four-day usage by 598 percent. For Kwesé, it built an app with endpoints for hosted URLs and an integrated live and video-on-demand DRM-protected media player.

“The way we consume media changes every day, and content providers must continually innovate to ensure they are reaching their audiences in a relevant and timely manner,” said Viola Growth’s Eran Westman, who will join the company’s board as part of the round. “Applicaster brings speed and accessibility to these companies in an autonomous way and has positioned itself to grow and evolve with their clients and the industry. We believe the category will continue to grow and that Applicaster, with its agnostic, flexible, and robust platform, will be the natural partner.”

In addition to its New York headquarters, Applicaster has offices in Miami, Los Angeles, San Jose, London, and Tel Aviv.