It would look pretty funny if a drummer strapped a metronome to her side. But since every musician needs to keep the beat, a startup has built a wearable device that, among other things, works as a digital metronome.

Whether you’re a beginner or a seasoned pro, you’re going to use a metronome if you’re a musician, said Florian Simmendinger, the founder and CEO of Soundbrenner, which is launching an Indiegogo campaign today for Pulse, its wearable device and the mobile app that goes with it. The metronome is an essential tool for musicians, he added, that hasn’t been radically improved on in the 200 years since it was invented, Simmendinger said. Until now.

The Pulse, a watch-sized round device that can be worn on a wrist or elsewhere on the body, was built around a notion that is likely quite familiar to anyone who ever took a music class: having a teacher tap the beat on them to help them feel it. “It’s natural,” Simmendinger said. “You can feel the beat and play along.”

The idea here, clearly, is to update age-old tools for today. That means, of course, that the device and the app go hand in hand. For one thing, explains Simmendinger, you use the app to adjust the beat. The device then vibrates with that exact rhythm. You can also rotate the device itself — much like a Nest thermostat — to change the desired beat. That’s key, he said, because it was obvious that musicians weren’t going to be happy if they had to pull out their phone to monkey around with the app every time they wanted to adjust it. 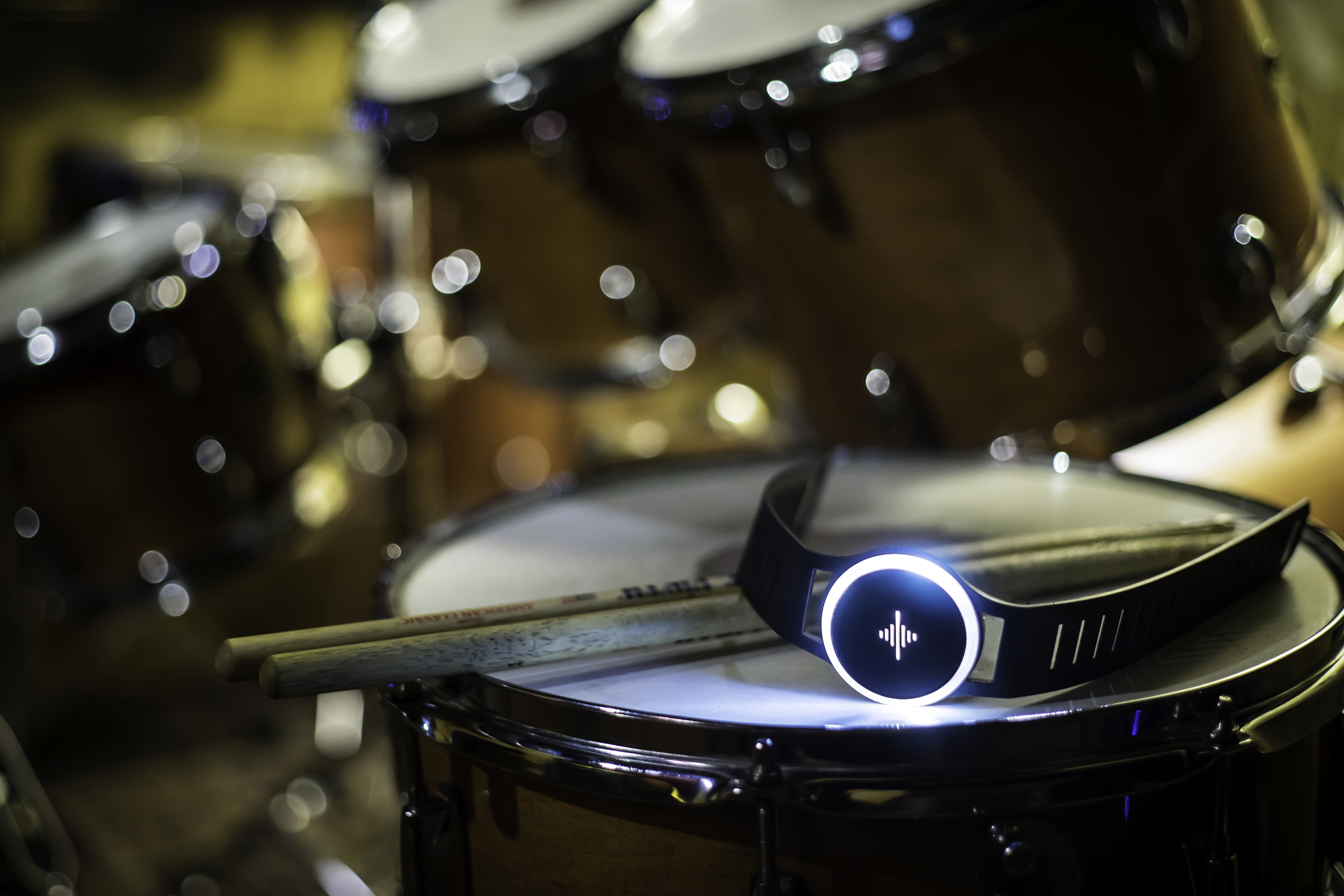 Above: The Pulse, seen resting on a set of drums

Still, being a mobile app provides groups of musicians a big advantage: Thanks to Bluetooth LE wireless technology, it’s possible to use the app to define a beat that will play on up to 10 Pulse devices. And there’s no appreciable lag, Simmendinger said.

Soundbrenner realized that it could have made the smartphone itself vibrate, negating the need for a separate wearable device. But Simmendinger said that an iPhone simply can’t vibrate enough to be noticed by a musician in the full swing of a performance or practice. Instead, the device itself was designed with built-in vibration that’s up to 600 percent stronger than what a smartphone can do. To prove it, he showed VentureBeat a demonstration of the vibration with both the phone, and then the Pulse device, sitting on a tray covered in salt. The salt leaped and jumped thanks to the device’s vibration, while barely moving when the phone did its thing.

At launch on Indiegogo, the Pulse will cost $115, and then go up to $129. The Hong Kong-based company expects to charge $149 for the device at retail. Soundbrenner is hoping to raise $75,000 in its campaign. But Simmendinger said that he and his team have been working on the product for nine months and plan on bringing the Pulse to market even if their crowdfunding campaign isn’t successful.