My Nexus 5’s cracked screen finished breaking a few weeks ago. Months after I accidentally slammed the car door on my jacket, the phone in the pocket was no more. I needed a temporary phone, and my unopened BlackBerry Classic review unit made a lot of sense.

Full disclosure: I did a one-year internship at BlackBerry when it was still called Research In Motion. It was my first and only office job, and I thoroughly enjoyed it.

The BlackBerry Classic perfectly exemplifies BlackBerry’s problems. The hardware is perfect, especially for a business user: It has a good weight, feels solid, and shows absolutely no sign of complaining when you drop it.

BlackBerry has somehow managed to improve the physical QWERTY keyboard once again. I had absolutely no problem going back to a hardware keyboard and once again — the transition was effortless. Once again being able to look away as I type was oddly freeing.

And yet, the software is incredibly frustrating. Don’t get me wrong: BlackBerry 10 has some great bells and whistles. Some features are even extremely well designed and thought-out, especially for those who just want to get shit done.

That said, I feel like I’m using a BlackBerry test device again. Employees at the company are encouraged to run beta builds on their main device to help test new software as it is developed. My BlackBerry Classic is running the latest version of the company’s mobile operating system, but it feels like my account is still stuck on unreleased, slow, and buggy software.

The device freezes, lags, and has difficulty coming out of sleep at the worst possible times. I still haven’t figured out a reliable way to get out of the dark-but-not-completely-black screen: Mashing buttons and swiping furiously eventually does the trick. I have permanent notifications on my lockscreen: I can’t view them and I can’t clear them no matter what I do.

The Voice Assistant pops up while I’m driving with the phone in the car door’s pocket. Multiple times it has called an ex-colleague, someone I haven’t spoken to for years, without me even realizing what my phone was up to until it was too late. It got to the point where he called me back, probably with a heavy mix of concern and confusion.

The OS, which is not Windows 98, warns me that I’m running out of memory. My only option is to close the app or continue using it with the hope the system doesn’t hang.

In the old days, BlackBerry users solved this problem with a hard reset: by pulling the battery in and out of the device. Like most phone makers, BlackBerry has adopted the trend of no removable batteries. But don’t worry, if your phone is running terribly slowly, you can just hold the power button and choose the new Restart option. The fact this is an encouraged option is quite telling: 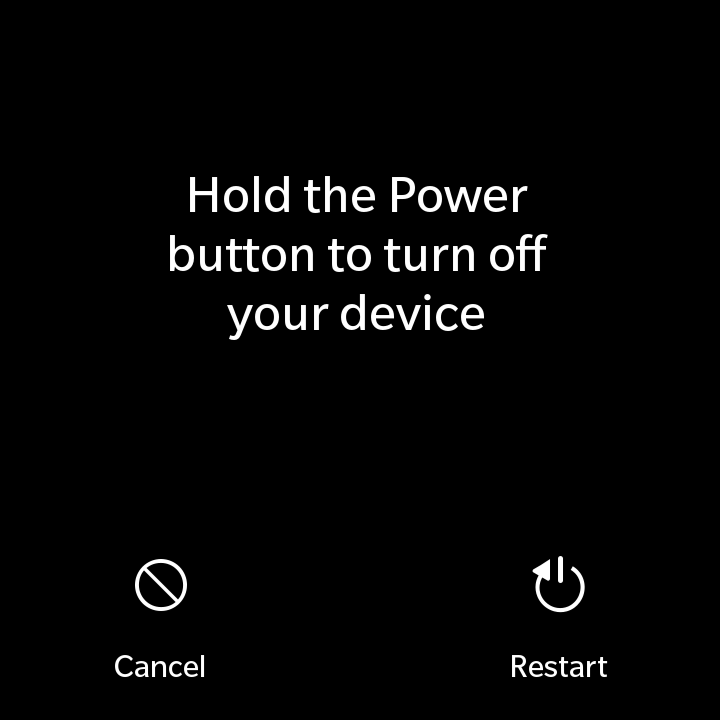 Even getting the above screenshot was a hassle. Taking it was not a big deal: I just had to hold the volume up and down buttons. Transferring them to my Windows computer, however, was not as simple as plugging in an Android phone, letting Windows install the drivers, and navigating to the drive in File Explorer. No, I had to download a BlackBerry installer and go through a setup process just to get the phone recognized.

All of this ensures that I’m not in the least surprised at last night’s Reuters report suggesting that BlackBerry is considering putting Android on one of its upcoming devices. BlackBerry has a software problem, and the company knows it.

BlackBerry 10 tries to solve this by offering two stores: BlackBerry World for business apps and Amazon’s Appstore for consumer Android apps. In my experience, this works okay — I was pleasantly surprised that some Android apps I didn’t expect were available, but they simply don’t perform very well because they aren’t meant to run on BlackBerry’s operating system.

But “works okay” doesn’t cut it when your competitors are multiple times your size. BlackBerry simply can’t take on software leaps like Google’s Now on Tap and Microsoft’s Continuum.

Still, if this BlackBerry phone running Android ever sees the light of day, I don’t expect the company will scrap BlackBerry 10 right away. Android is a potential solution, but it won’t solve everything.

BlackBerry is likely hesitant to go with Android for the same reason Nokia chose to go with Windows Phone: There is simply a ridiculous number of Android hardware makers, including behemoths like Amazon and Xiaomi, that have forked Google’s mobile operating system. By using the same OS as almost everyone else, you seriously limit your options to differentiate.

BlackBerry of course still makes unique hardware — it’s the only phone company that doesn’t simply compete on tiny design differences for touchscreen slabs. Still, that doesn’t mean its battle will be much easier in the super-saturated smartphone market.

BlackBerry will likely see how its Android phone sells, maybe even try a Windows 10 device, and if either takes off, it will slowly cut down its BlackBerry 10 offerings. This is a simple inevitability if BlackBerry still wants to build and sell phones.

The reality is that it’s incredibly difficult to compete with the developer teams at Apple, Google, and Microsoft. At one point, BlackBerry had a big head start, not just in hardware but in software as well. The company lost it a few years ago, and the gap is inevitably widening with every passing quarter.

Android can help BlackBerry close this gap, so the company won’t have to worry about not having a reliable mobile operating system and a decent selection of apps. To differentiate itself properly, BlackBerry will have to port its various offerings to Android, much like BBM, and probably build out Android-specific tools and services.

Once again, that’s a question of developing competitively excellent software.