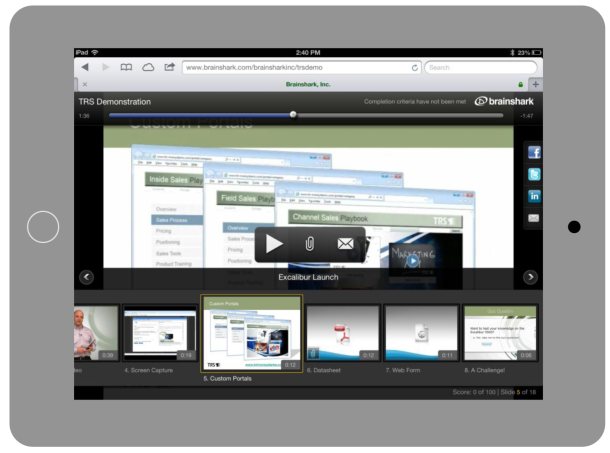 Brainshark has been a leading online presentation service for some time now, and it’s also launched a successful iOS app, Slideshark, for viewing Powerpoint presentations on Apple devices. But until now, the only way to take advantage of interactive features in Brainshark’s presentations on mobile required downloading an app.

That all changes today with the launch of Brainshark’s Mobile Player, an HTML5-powered viewer that lets anyone with an iOS or Android device view your presentations from within a web browser.

“Mobile is key for us, obviously, as our customers are moving there,” said Greg Flynn, senior vice president of products and services at Brainshark, in an interview with VentureBeat. “The combination of Brainshark, Slideshark, and the ability to use any of those presentation assets … from a mobile device is key to our strategy.”

The mobile player gives you most of the functionality of Brainshark’s apps: you can play presentations, view attachments, and respond to poll, survey, and exam questions (which makes it particularly useful for mobile learning, or “mLearning,” programs). You can also share presentations to friends via social media and e-mail.

Brainshark spent around six to nine months developing the mobile player, but the real difficulty was dealing with all of the various asset types that its presentations support, Flynn noted. Ultimately, the company took advantage of a core feature from its recently released Slideshark iOS app to power the mobile player.

“If you think about it, people in sales are always looking for just in time information,” Flynn added. “Now with the ability to perform so much with their mobile devices, Brainshark is really extending out capabilities as people need it.”