Above: These are the things that confirm that we live inside a sci-fi novel…

The Internet of things brings computing intelligence and Internet connectivity to previously dumb devices, from coffee machines to thermostats. Combining computers, connectivity, and sensors should lead to an explosion of devices. By 2020, Internet-connected devices are expected to number between 26 billion and 50 billion, according to Raymond James & Associates. The IoT European Research Center estimates there are 80 things connecting to the Internet for the first time every second, and by 2020, this should expand to 250 every second. And those devices will need connectivity.

That’s where WICED comes in. It stands for Broadcom’s Wireless Internet Connectivity for Embedded Devices. It uses low-power protocols to connect devices to each other and the Internet. The development kit makes it easy for app developers to create sensors with built-in wireless connections. Broadcom’s own chip for this WICED-based platform includes Bluetooth Smart connectivity (a low-power version of the short-range wireless connection protocol), and five different low-power motion sensors (micro-electro mechanical systems MEMS).

The WICED Sense development kit and smartphone app can be connected and run programs within minutes. It shortens the time it take for hardware and software makers to create working prototypes. Broadcom will charge just $20 for the developer kit, and by making it available so cheaply, Broadcom believes it can spur both big companies and hardware hobbyists alike to join the Internet-of-things bandwagon. In the long run, that will help Broadcom sell more chips, and the innovation will be in the software that runs on top of them. 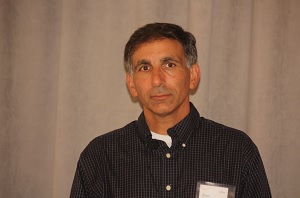 Above: Brian Bedrosian of Broadcom

“This is about access to technology and collaboration,” said Brian Bedrosian, Broadcom’s senior director of embedded wireless, at a press conference on Tuesday night. “The challenge of the Internet of things is that it encompasses so many different applications and products. We want to innovate and drive things in a direction that allows everybody to participate.”

He added, “It offers a massive number of new ideas that can be applied, and so many are in spaces that haven’t been created before. There’s no monopoly in any particular market.”

Broadcom wants to provide the core foundation of chip technology that can be used across a bunch of hardware devices and applications. Bedrosian said that Broadcom hopes to expand into the industrial, medical, and consumer home automation markets with Internet-enabled devices. Application creators are downloading the WICED software at a rate of 1,500 per quarter now, Bedrosian said. That means it is getting traction and apps will come soon.

The apps can be used to send text alerts to a parent’s smartphone if a child’s bedroom rises above a certain temperature. Or you may be able to find car keys by attaching them to a WICED Sense kit, or sensor, and then have the sensor trigger an alarm on a smartphone when it is nearby. A WICED Sense kit could also send an alert if a pet wanders outside predetermined boundaries at home. Someone has already connected a Raspberry Pi computer to the kit.

All of these applications can be easily created using the WICED Sense development kit. Bedrosian said the kit can save developers weeks of engineering time.

To show off what is possible, Broadcom invited a number of startups to the press event that are using its WICED Sense platform, which includes motion-sensing gyroscopes and accelerometers, an electronic compass, a barometer for weather or altimeter sensing, humidity and temperature sensors, and encryption technology for security and privacy. It works with iOS and Android, and it supports iBeacon. It has a whole stack of software built into the hardware.

At the event, in San Francisco, the representatives of Grush showed off an Internet-connected toothbrush, which tracks your kid’s brushing patterns and tells you if your child is brushing regularly and correctly.

Electric Imp also showed off its infrastructure software for the Internet of things. Running atop the Broadcom wireless chip and an ARM-based microprocessor, the Imp operating system can handle tasks like updating, security, and networking. It is secure and it enables the device to take advantage of cloud computing and communication in real-time. 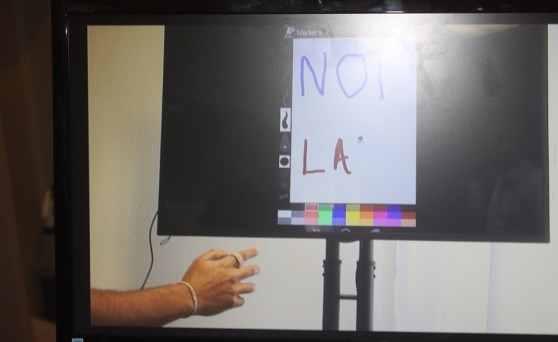 Nod Labs also showed a small ring with motion sensors built into it. It enables what the startup calls “touchless interaction,” and it can serve as an input device in virtual reality devices. If you twist your hand or press a small button on the ring, the device sends wireless signals to a display or computer. That movement is then reflected inside the application. If you twist your hand in real life, you’ll see a virtual hand twist inside the virtual reality application. You can use it to draw on a virtual screen or navigate your way through a virtual reality game.

Expectations for the Internet of things are high. But Bedrosian acknowledged there are a lot of roadblocks. The market is fragmented with lots of different standards and certification bodies. Some companies, like Broadcom, are supporting open platforms, Bedrosian said. But others are promoting their own proprietary technologies in hopes of gaining an advantage.

Security for Internet-of-things devices, networks, and data storage won’t be easy, given the sophistication of hackers. Another barrier is the difficulty of creating easy-to-use yet sophisticated hardware and software that work well together. Broadcom wants all component vendors, hardware makers, software developers, and system vendors to work together to create pre-integrated, pre-tested Internet-of-things applications.

“There will be problems going forward,” Bedrosian said. “We want to tackle all of them.”

Above: Broadcom’s vision for Internet-of-things applications.