In the world of social media, people express their views freely, often whether it’s appropriate or not, and while we’re entitled to our opinions, what we say on social media can impact our job and our private life. This has given rise to apps that espouse anonymity with the promise of building “freer” communities. But while the motives may be altruistic, there has been controversy around many of these apps, some of which have seen people trolling, harassing other users, and basically showing the darkest side of humanity. 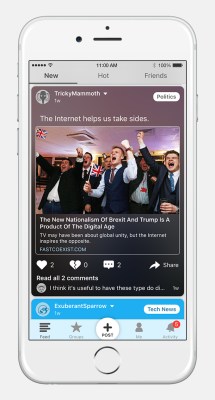 Although Secret, Whisper, and Yik Yak existed together in the marketplace at one time, Bindu Reddy and Arvind Sundararajan believe that their new approach will allow people to express their opinions anonymously but in a more professional manner, one that’s free of any vitriol and harassment. With that in mind, today they are launching a new app called Candid, which is available for both iOS and Android devices.

“We felt there’s no good place for expressing yourself without backlash about things and people you care about,” Reddy told VentureBeat.

Although the app promotes anonymity, it uses your Facebook contacts in order to personalize the experience. However, nothing is stored on Candid’s servers and everything is encrypted. That said, when you start to use the app, it’ll ask you to choose from a couple of interests — via a Tinder-like swipe interface — such as politics, technology, marriage equality, sports, and cooking.

You’ll be able to join communities that are related to you, based on schools you’ve previously attended, for example, or places you worked at, or those where your friends work. But while Candid gives you this tailored approach initially, once you begin using the app, the real privacy kicks in. Each post has a unique identifier, which means others can’t discern who you are by looking at patterns.

To ensure that Candid stays a civil place, the company deploys artificial intelligence and Natural Language Processing (NLP) to analyze every post. All questionable content is removed, negative sentiment posts are flagged, and off-topic comments will be redirected to the appropriate community group. There’s even a sentiment analysis model in place that’ll identify hate speech, slander, and threatening comments for immediate deletion.

We asked Reddy what the company’s policy is on bullying: “Most people haven’t made a huge attempt to prevent bullying because they want to tie growth to it,” she said. “If you let a free-form app be, this is the content you’ll get. Communities help to ensure policing of content.” 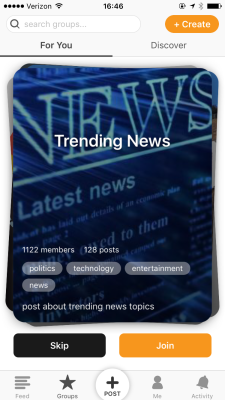 In a way, it’s like the Quora model, in which other users will maintain order in groups to protect a certain way of life and keep trolls and bad influencers from running amuck.

Other features in Candid include a system that detects possible rumors on the internet. This app scours the web and Twitter for any evidence to confirm statements made in posts. If something can’t be corroborated, Secret asks users to mark the statement as “true” or “rumor,” while allowing other news leaks and insider information to surface. Additionally, you can earn badges based on your activity — and if you make too many negative posts, you’ll receive a “hater” badge.

“By giving people the ‘hater’ badge, we hope to make haters more aware of their hate,” Reddy explained. The idea is that they’ll either leave the app, change their behavior, or could continue their ways and eventually be kicked out anyways.”

Candid also has an option that can be initiated should there be signs a user may commit self-harm. The app will remove posts, as indicated, and send a push notification to the user with information about how to reach their local crisis helpline. This policy can also be found in the app’s “help” section.

Although you can share text, images, and GIFs in posts, videos aren’t yet supported. However, Reddy confirmed that they will be soon. Posts can also be shared to Twitter and Facebook.

Reddy and Sundararajan are former Googlers and have worked in the social space for more than a decade. They started MyLikes to help influencers establish a presence and monetize their audience and grew the company to a staff of more than 50 people and $40 million in revenue. But with problems around freely expressing one’s opinion and the possible consequences that can result, Reddy understood that another option was needed. Candid was spun out from MyLikes and is already being used by more than 600 beta testers, including individuals from Google, LinkedIn, Facebook, and Yahoo.