Viber, the chat and messaging app acquired by Japanese ecommerce titan Rakuten for $900 million five years ago, is introducing a new subscription service that lets users pay to have a local phone number that anyone can call.

Founded in 2010, Viber has grown to claim more than 1 billion “registered users” globally, though the company doesn’t reveal how many of those are active on the platform. As with similar messaging apps such as WhatsApp, users sign up to Viber using their own mobile phone number, which allows them to easily connect with other friends and contacts who have joined Viber.

With Viber Local Number, which has been in closed beta until now, users can pay $4.99 per month to access a local telephone number for anyone outside of Viber to call or text (SMS).

For the caller, it costs whatever their network rates are for calling a local number, while the Viber user doesn’t pay anything extra beyond their monthly subscription.

There are caveats with the service for now, though: Viber users can’t call out using their local number, and they can’t respond to text messages using their local number. So if someone messages you on your special Viber number asking a question, you won’t be able to respond. The company told VentureBeat that it plans to make the number function bidirectionally in the future.

There are clear benefits to offering local numbers through a messaging app such as this: Business people can get themselves a local telephone number to deal with clients, even if they’re traveling on the other side of the world; friends or relatives can call Viber users at their local rates, without being on Viber themselves; and Viber users can access their Local Number across all Android and iOS platforms. In effect, this means you can take business calls through your iPad.

“The new Viber Local Number enriches our users in a way that makes Viber the most powerful communication app out there,” noted Viber CEO Djamel Agaoua. “From expats who need a local phone number that connects them back home, to global business owners who want overseas clients to feel they are located nearby, this new feature gives them a local presence no matter where they are.”

At launch, Viber Local Numbers can only be purchased for the U.S., Canada, and the U.K., but it said that it expects to add more markets to the mix soon. The first 10,000 people who sign up can also lock in a discount $1.99 subscription for life. 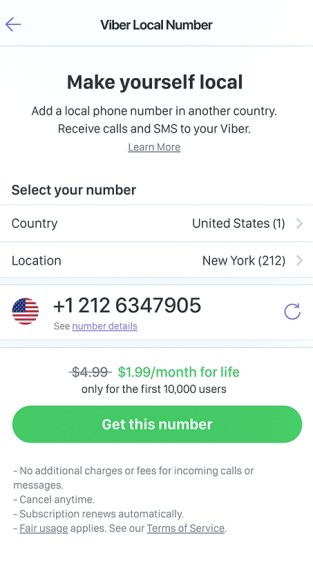 Above: Viber: Subscribing to a local number

Achieving scale on messaging apps is a hard enough feat in itself, but once that scale is achieved, it’s not always easy to make money. Facebook has struggled to monetize its $20 billion WhatsApp acquisition, and only recently has it started making headway by targeting businesses.

Viber, which is particularly popular in Eastern Europe, the Middle East, and parts of Asia, has generated direct revenue for a while through various initiatives such as charging for making calls to non-Viber numbers (similar to Skype), selling stickers, and more.

Selling subscriptions to local numbers fits into that broader push, and it is something that should prove popular. Though there are a number of similar services out there, including so-called “burner” apps that sell disposable numbers, having such a feature built into an existing messaging app makes a great deal of sense — it means users don’t have to flip between multiple services.

Moreover, Viber isn’t really targeting this at the burner market. Sure, it could be used to glean a temporary number, but to change it they have to cancel the subscription and then resubscribe to a new one at the next billing cycle. Users can, however, subscribe to several numbers in multiple markets simultaneously, all through the Viber app.

The bottom line is, Viber wants to be more sticky, and local numbers is one more way to achieve this.