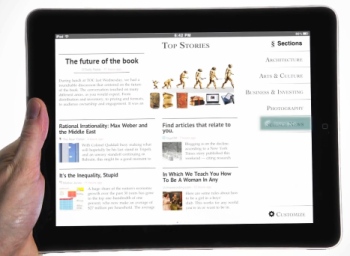 CNN on Tuesday announced that it has purchased Zite, a personalized magazine app for the iPad, for a reported $20 to $25 million. This confirms last week’s rumors that a deal between CNN and Zite was in the works.

News magazine applications that deliver curated, personalized content have steadily been gaining popularity, with apps like Flipboard, Editions by AOL and Yahoo’s unreleased Livestand crowding the field. CNN and other publishers are trying to dig their heels into this tablet app space because of its potential and the potential slew of new customers.

KC Estenson, general manager of CNN Digital, told VentureBeat that people consume content in a different manner on tablets than they do on desktops and laptops, so you have to provide them with a different kind of interface and experience. “When people use tablets, they’re more concerned with search and discovery,” Estenson said.

As we wrote when the app launched, Zite combines the custom tablet magazine experience as shown off by Flipboard, with the content personalization seen in apps like Gravity and My6sense. The result is a slick and engaging way to read content.

Zite CEO Mark Johnson told us he couldn’t comment about the rumored cost of the Zite acquisition. But he did take a moment to explain why he believed Zite was better than the rest of the magazine tablet apps. Mostly, he said, it’s because Zite has had six years of research and technology development behind it.

“We easily have the most personalized results,” Johnson said. “While competitors offer a dozen categories to choose content from, we offer thousands.”

CNN’s Estenson echoed Johnson and said the Zite team had achieved something unique in its approach to content personalization.

“I don’t think people have seen just how good and how powerful this technology is yet,” Estenson said. “People make applications that are pretty, and there are some good ones out there, but they aren’t this good.”

Zite will remain as standalone entity as a wholly owned subsidiary of CNN. But CNN’s infusion of capital will make it possible for Zite to expand its eight-person team to include more employees.

“Right now, we have more ideas than we have employees,” Johnson said. “We want to move on to more platforms than just the iPad. It makes sense to move to other tablets and to support smartphones.”

Before the acquisition, Zite had made a few headlines for receiving a cease and desist letter from Gannet, Dow Jones, the Associated Press, the Washington Post, Getty Images and other big names in content unhappy with the use of their content. Becoming part of CNN’s umbrella may very well help the company address these companies’ concerns.