Thousands of chatbots exist in the world today across numerous platforms, but do we really know how well these programs are performing? It’s one thing for developers to launch bots onto messaging apps, but in order to ascertain their effectiveness, there needs to be some way to analyze the results.

Dashbot believes this is an area where it can benefit everyone, and today the company is publicly introducing its analytics platform for chatbots on Facebook Messenger and Slack. In addition, it has also debuted a live human feature, giving companies the ability to interject a human being into a conversation when warranted.

Above: Sample user report on a chatbot provided by Dashbot.

Additionally, with bot makers, the data they want are voice, text, images, locations, and other content, not cookies, user agents, or IP addresses. He explained that by having richer and actionable data, you’ll be able to tell through a user’s own voice what they want from the bot. Should they get frustrated, it’ll be easy to notice quickly and send a human agent to jump into the conversation.

Other notable features of Dashbot include enabling push notifications to re-engage users with the chatbot. When deployed, you can segment your audience based on usage metrics and then send promotions based on activity levels, all managed through Dashbot. 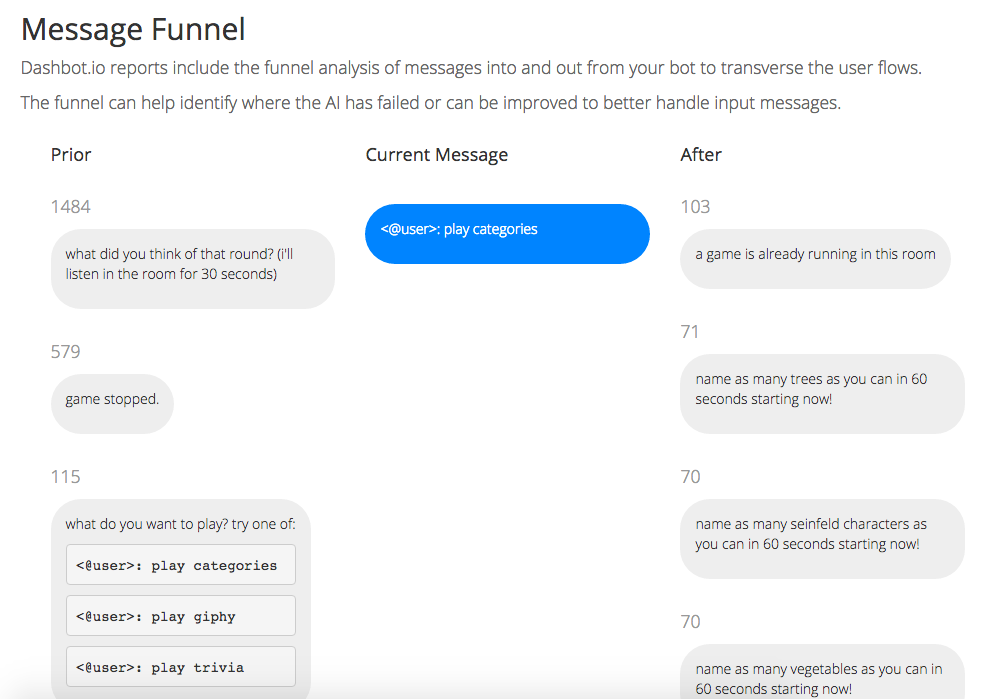 Above: Dashbot’s message funneling to determine where the A.I. has failed or can be improved to better handle input messages.

There’s also a testing feature that examines messages sent by the bot’s artificial intelligence to find out which messages should be sent out, optimizing for the best responses and content to be distributed.

Developers can add a couple lines of code to their Facebook Messenger or Slack bot and Dashbot will take care of the rest, analyzing the data in real time. By doing so, Merritt said, you’ll be able to take action right away, which may lead to better opportunities to make money.

Analytics isn’t new to Merritt, as his previous startup focused on mobile tracking. Although there are chatbot analytics providers sprouting up, such as Kochava and BotPages, Merritt said the biggest competitors he sees so far are development teams trying to build something themselves.

Is he worried about Slack or Facebook rolling out analytics, which has been foreseen? Merritt said no. He’s seen in the past that when companies do that, “It might be very basic, and people are using [third-party solutions] to get fuller, richer metrics.”

Above: How Dashbot works with a server-side integration.

Although Dashbot currently supports bots on Facebook Messenger and Slack, it also has a generic SDK that’ll work on other messaging platforms. It does intend to develop more specific ones for Line, Telegram, Alexa, and other messengers.

The company counts more than 130 customers since its launch five weeks ago, including MessinaBot. It’s still working on pricing, but will likely utilize a freemium model where analytics will be free based on usage, while features like the live person takeover, notifications for re-engagement, and A.I. testing will be priced by transaction, which has yet to be determined.

Anyone can use Dashbot, but the core audience are those in the enterprise, like those in the media, travel, entertainment, or local industries.

Updated as of 8:42 a.m. Pacific on Wednesday: Post has been updated to correct that Dashbot launched five weeks ago, not months.