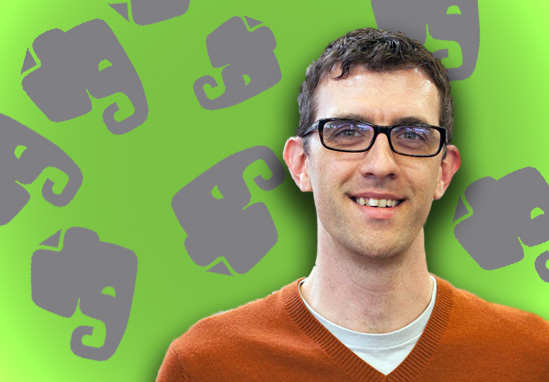 If you’re a developer looking for a good model for how to build your app, Evernote is a great example to study.

Since launching in 2008, the digital notebook service has made its home on just about every mobile platform — iOS, Android, BlackBerry OS, and even Windows Mobile — giving it a lot of perspective about how to best approach mobile app development on multiple fronts.

So Evernote’s CTO Dave Engberg knows a thing or two about taking a small app and making it into something much, much bigger. Engberg will be speaking at our MobileBeat conference next month, where he’ll serve up even more lessons on how to build a killer mobile experience.

In the meantime, here is some mobile app wisdom he’s shared with us.

If you ever want to be as big as Evernote, you can start by trying as hard as you can to not copy it — especially in regard to its backend.

“Most companies shouldn’t do what were doing and run their own hardware. We have dynamics that make it more sensible for us, but 99 percent of startups should be in a cloud environment,” Engberg said, referring to services like Amazon Web Services, Windows Azure, and Rackspace Cloud.

Lesson 2: Understand the real benefits of the cloud

As Engberg points out — and probably lots of startups have already figured out — the cloud is, in many ways, the ideal environment for any budding Internet company. “The cloud is fantastic if you have certain types of problems. If your bandwidth is really spiky and varies from day to day, cloud services let you pay just for what you’re using. Same goes for storage and processing demands,” Engberg said.

In contrast, using a cloud service for data storage would be a nightmare for Evernote, whose storage demands are constantly increasing. “Something like AWS wouldn’t really work for us,” Engberg said. “The sun never sets on the Evernote empire.”

Lesson 3: If you really want to scale, build your API first

Most web companies nowadays start their operations by building their app interface first and then adding an API later on — but Engberg says that’s often the wrong way to go.

“At Evernote, we knew from the start that we were going to have multiple applications. We also knew we needed to design for synchronization at scale, so we built our API first and used that to build interfaces as opposed to what web companies would have done,” he said.

If you want to go cross-platform and scale rapidly, it’s not a bad idea to focus on that API first.

Lesson 4: Infrastructure is cheap, so innovate on talent

Why? Because servers, bandwidth, and overall infrastructure are cheap — so cheap that, for Evernote, they pale in comparison to the real costs: people. For Engberg, the real goal should be ensuring that your talent is happy, well-compensated, and not spending time on projects that come with a lot of work but little payoff.

“Hardware is cheap, so you should be innovating on it as little as possible. Startups should focus on the most established stable commodity infrastructure and then focus on their core businesses and people,”  he said.

Here’s a number that drives the point home well: Evernote has a workforce of roughly 330 people, and only 14 of them are working on the company’s technical operations. Not bad for an app with 60 million or so users.

Lesson 5: When a new platform launches, be there on Day One

One of the big secrets to Evernote’s success is its uncompromising ubiquity. When iOS launched, it was there. Same goes for the launch of the iPad, which the Evernote team designed for without even having one to test on.

“Phil [Evernote’s CEO] made a cardboard copy of the iPad just so we could get a sense of how the thing would feel,” Engberg said. That’s a long way to go just to be on a new platform at launch, but it’s that kind of tenacity that has helped Evernote get to where it is today.

The big challenge on the horizon, Engberg says, is iOS 7, which is going to force developers to revamp their apps to suit all of its new features. “iOS 7 is going to cause some upheavals.”

But you can bet Evernote will be ready when iOS 7 eventually hits your iPhone.