You can get the app for free on iOS devices and then use it to purchase individual Disney movies (for $19.99) from a library of 420 films. Those purchased movies will be viewable not only within the Disney Movies App but also within your own iTunes library.

The app will let consumers discover, purchase, manage, and watch movies from Disney, Pixar, and Marvel at home or on the go. The release of the app coincides with the first digital release of the hit film Frozen. If you open a Disney Movies Anywhere account and connect it with your iTunes account, you’ll get a free copy of The Incredibles animated film.

“Disney Movies Anywhere offers an exceptional consumer experience built around some of the most beloved and popular entertainment brands in the world,” said Alan Bergman, president of The Walt Disney Studios, in a statement. “This unique technology underscores Disney’s commitment to meeting our consumers where they are with the content they want, and we’re thrilled to debut with iTunes, the No. 1 digital media retailer in the world.” 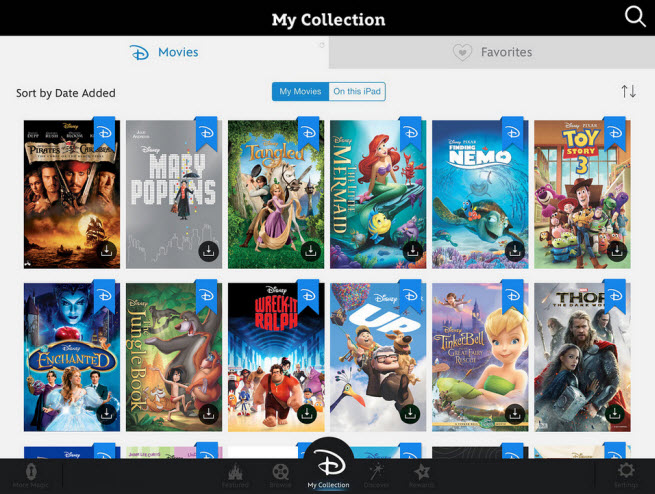 The link to Apple’s iTunes is all about making things convenient for users, said Jamie Voris, chief technology officer of Walt Disney Studios, in an interview with VentureBeat. Disney wants people to expand their digital movie libraries and be able to watch them in a family-friendly way.

For instance, Voris said that parents can put viewing restrictions on movies on a per-device basis. They can lock an iPod Touch device so that it will only play G-rated movies. And if you buy a movie in a Disney account, that movie will showed up in a linked iTunes account. Voris demoed that capability in a live briefing yesterday.

“The content just flows to the right locker,” Voris said. “This is about protecting your collection for the future.”

Disney’s app has an easy-to-navigate interface. You can use it to watch films or get exclusive content and bonus features, like previews, trailers, and special items. Voris said the app is debuting only with iTunes for now, but it will also work with future partners on other platforms as well. Disney has created a new web site to go with the app too. You only have to link your Disney account and iTunes once.

Disney will also extend its Disney Movie Rewards program to digital users. Since 2008, the company has included codes in DVD, Blu-ray and web products that are redeemable for digital copies of Disney, Pixar, and Marvel films. Users can now redeem those codes via Disney Movies Anywhere. Those redeemed rewards, such as digital copies of movies, will automatically show up in both the app and iTunes once a user logs into Disney Movies Anywhere and connects an iTunes account. You can also earn points toward digital purchases via the app for the first time.

The technology is built on Disney’s proprietary digital rights locker, KeyChest. You can search through the whole catalog and look for movies based on genres.

“This is about establishing the value of digital ownership,” Voris said. 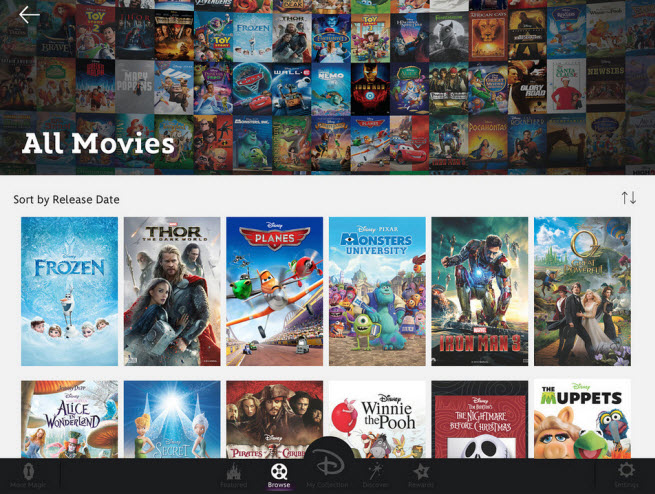