Language learning app Drops will be the first multi-language app to offer native Hawaiian as a language on iOS and Android. In doing so, the company hopes to revive interest in a language that is otherwise dying out.

The app has almost 2,000 words at launch, all developed by a native Hawaiian translator. Drops tries to make itself into a habit by visually teaching the building blocks of language, words, which works particularly well with the Hawaiian language.

Native Hawaiian, an endangered language, is an important part of Hawaiian culture. According to the Endangered Language Project, there are just under 300 native Hawaiian speakers. Around 75 percent of the Hawaiian population say English is their dominant language, followed by Tagalog and Japanese.

With 2,000 words, the company said, that vocabulary level is at a point where most linguists say is sufficient for understanding between 80 percent and 90 percent of a language. In a study of 326,893 second-language speakers at home, only 5 percent spoke Hawaiian at home. By the 1980s, the language was on the brink of extinction, when fewer than 50 people under age 18 could speak Hawaiian fluently.

With Drops, Hawaiian locals and the millions of Drops users around the world can now learn the basics of Hawaiian. With vocabulary categories like food (poke, kalua pig), objects (lei), transportation (wiki), and more, users match an image and the corresponding word with the swipe of a finger. These visual mnemonics are proven to help you learn and remember new words and phrases easily, the company said. 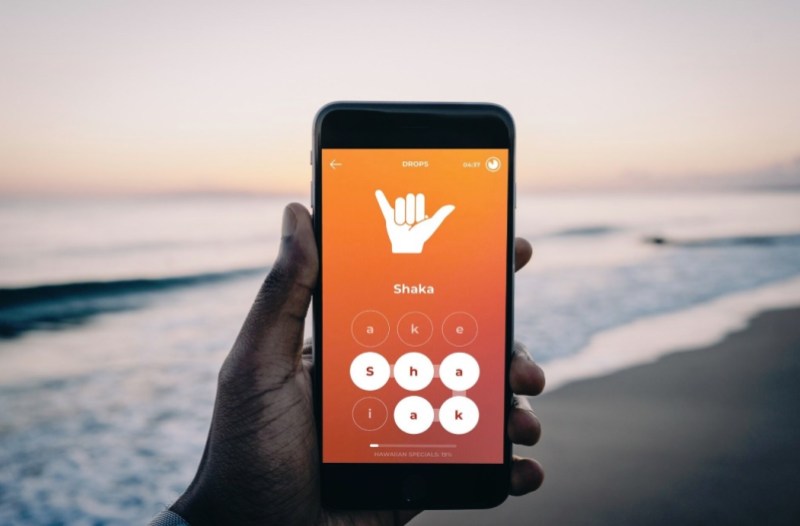 Above: There are only about 300 native Hawaiian speakers left.

The app will include colloquial terms like the “shaka,” a hand gesture used by locals to convey the “Aloha Spirit,” a concept of friendship, understanding, compassion, and solidarity among the various ethnic cultures in Hawaiʻi. Another culturally significant Hawaiian word in the app is Humuhumunukunukuapua’a, the native Hawaiian reef triggerfish and state symbol.

“Language connects us to our identity of who we are, and where we are from. The Hawaiian language has a rich history with words and phrases uniquely tied to the values embedded in their culture,” said Daniel Farkas, CEO of Drops, in a statement. “We worked with native translators to create an experience that delights learners of all ages and all levels — from parents who grew up speaking Hawaiian, to children who may have grown up hearing it, to new users who are passionate about the language’s revival.”

Drops relied on translator Ahonui Mims to make sure the translations were accurate.

“I moved to Hawaiʻi when I was 12 and learned ʻŌlelo from my kumu in high school and in college. It wasn’t until 1978 that Hawaiian was once again made an official language in the islands alongside English,” said Mims, teacher, or Kumu, at LearnHawaiianOnline.com, in a statement. “Drops on Hawaiian supports the spread of the language and helps it to become part of the household.”

In six months, Drops has doubled in downloads to more than 5 million users. The company has 13 employees, and Farkas founded it with Mark Szulyovszky in 2015.

“Given my first language is Hungarian, I have a particular affinity for niche languages. We recently launched Icelandic and the response has been incredible. The work that has already been done in preserving the Hawaiian language is amazing, and we are eager to do our part and help support its resurgence with Hawaiian on Drops,” said Farkas.

Drops is available for free on iOS and Android. A premium version available for $9.99 monthly, $69.99 yearly, or $199 for lifetime access.

Drops has 13 employees and is a globally distributed team with employees across the U.S., Asia, and Europe.

Farkas and Szulyovszky were acutely aware that learning multiple languages is critical for most of the world to participate in the global economy. They also realized that the process of language learning was broken. With Daniel’s background in meta-learning and mnemonics and Mark’s experience applying cognitive science to mobile gaming, they saw an opportunity to bring their complementary expertise together to transform language learning.

Drops has not raised any money, and it is profitable.