Amplino may be the ultimate garage project. Three DIY bio-hackers have created a mobile malaria testing kit they claim can identify different strains of malaria with higher accuracy, and at lower levels of parasite concentrations than existing rapid diagnostic tests.

The testing device is connected via Bluetooth to a mobile phone, making it possible to track malaria outbreaks and the spread of particular strains. The team just won 40,000 EUR ($52,000) in the Vodafone Mobile for Good competition to further develop the kit.

Amplion’s young founders Jelmer Cnossen, Wouter Bruins, and Pieter van Boheemen have backgrounds in bio-informatics/mechanical engineering, cell biology, and functional genomics respectively. The group became fascinated by the DIYBio movement, which blends biology expertise with electronics, software development, and open source principles. Amplino’s team started to look at a technique called PCR, which copies a segment of DNA billions of times so that it can be analyzed. PCR is a well-established technique used in criminal DNA testing, disease diagnosis, and even testing whether food is halal. 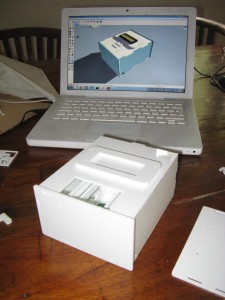 A $600 “Build it yourself” OpenPCR machine already existed. The team decided to go one step further and develop a mobile device to do real-time PCR plus diagnosis of malaria. When you add a DNA binding dye to the multipled DNA mixture and shine light of a specific wavelength on it, the mixture will emit light when the malaria parasite is present.

In fact, the technology can detect any kind of pathogen, not just malaria, depending on the selection of a chemical component called a primer used in the device. A commercial real-time PCR setup can cost up to $30,000. Amplino built one for $60.

Malaria is a massive problem in the developing world. WHO estimates that up to 1 million people die each year from the disease, the majority of which are children in sub-Saharan Africa. The main methods of testing in the developing world are rapid diagnostic blood tests, which look like a pregnancy test and can be easily used in the field, and microscopy of a blood smear. The basic measure of accuracy of a malaria test is its sensitivity, in other words what percentage of infected people are correctly identified. Other factors in assessing a testing system include the concentration of parasites which need to be present in the blood for the test to correctly detect malaria, the number of false positives, storage life, or whether refrigeration,  clean water or trained medical staff are required.

Rapid diagnostic tests (RDTs) are less sensitive than lab tests like microscopy and cannot identify different types of malaria. Microscopy requires samples to be sent to a laboratory where trained health professionals review the blood samples. Incorrect diagnosis means that the limited supply of malaria drugs is not allocated optimally. However, testing at the point of care can still result in higher levels of correct patient treatment than more accurate, but slower, lab testing.  The World Health Organisation tests available RDTs each year to determine their sensitivity and PCR technology is used as the benchmark. So PCR can be regarded as the gold standard of malaria diagnostics.

Amplino’s test combines the accuracy of PCR with the mobility and ease of use of rapid diagnostic tests. It can be used by non-medical staff for immediate diagnosis of different types of malaria in the field. It can also detect malaria in pregnant women. During pregnancy, a woman’s immune system is suppressed, making her twice as likely to die from malaria. The parasites that cause the disease can hide in the placenta, making them much harder to detect. PCR can detect malaria at up to 10x lower concentrations of parasites in the blood than RDTs, making it suitable to identify re-infections as well as malaria in pregnancy.

Amplino estimates that the final mobile testing device will cost about $250, while the cartridge required per test costs between 50 cents and $1. Getting the device to market is still a long road. While the core PCR technology is not new, all medical devices need to be certified. This process, plus getting the prototype ready for manufacturing, could cost up to 1.5 million EUR over the next few years.

There are not many competing devices. InstantLabs makes a portable, real-time PCR system, but the company seems to focus mainly on the food safety industry. Lava Amp makes a $300 machine to run PCR but not to diagnose a particular disease.

“Our ultimate goal would be to get money from the Gates foundation,” said Bruins. “We need strategic, not purely financial investors.” The Vodafone prize will allow the team to produce a version of the prototype that can be manufactured on a large scale (they estimate this will take six months) and test it in the field in Burkina Faso.

Amplino is not seeking to patent the technology. “I actually have two patents pending (for other technologies), ” Bruins explained. “But is a patent really fit for our mission? Maybe we need to ditch the whole patent approach.”

Amplino was founded in 2012, is based in Leiden in the Netherlands, has three employees, and is privately funded.