Facebook has begun rolling out several updates to its livestreaming capability this week. People and Page administrators will now be able to broadcast longer with Facebook Live — up to 4 hours per session, along with being able to do so in fullscreen and video-only mode. These options are intended to benefit both the creator and the viewer and are set to be released more broadly “in the coming weeks.” 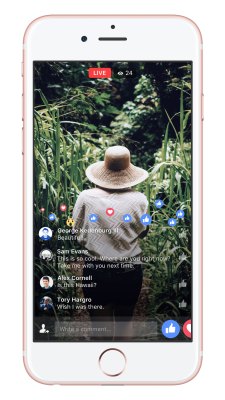 When Facebook Live launched last year, broadcasts were limited to 2 hours in length, but now that limitation has doubled. The social networking company said that viewers and publishers had requested the ability to livestream longer, and so now it’s possible across both Facebook’s app and the Live API.

Other updates include how you’re consuming live broadcasts. Starting today, you’ll be able to go live in fullscreen, meaning that if you’re doing so on an iOS device, it’ll go fullscreen in portrait and landscape mode. On Android devices, fullscreen mode is only supported in portrait mode, but Facebook plans on making it available in landscape “later this summer.”

There’s also an optional control that temporarily will hide reactions and comments during live broadcasts. The idea is that some people may prefer to just simply watch what’s happening without any distractions. To enable this feature, swipe to the right; swipe left to bring comments and reactions back to the broadcast.

These are just some of the most recent updates that Facebook has made in order to win over the hearts and minds of content creators, especially as the livestreaming competition heats up. The company is battling for attention against Twitter’s Periscope and YouTube. There’s even reports that suggest that it has been paying creators and publishers for using its product, doling out $2.2 million as payment to “encourage experimentation,” according to Facebook’s vice president of global operations and media partnerships Justin Osofsky.

It has also added scheduling and broadcast support from within the MSQRD app, enabled better discovery by featuring broadcasts within trending topics, allowed targeted livestreams within groups and events, added reactions and filters, and even opened it up to more devices such as those created by GoPro.