Facebook added video conversation into its Messenger app this fall to encourage users to treat the app as their default communication method, not only locally but internationally. To date, more than 245 million people are making one-on-one video chats every month on the service. Now the feature is expanding with the addition of group video chats.

Rolling out to iOS and Android apps today worldwide (so give it time if you don’t have it yet), a group video chat can hold up to 50 people participating in different ways — up to six people can be seen at a time, but 50 can listen and respond using text, stickers, emojis, and GIFs. In a way, it’s akin to Google Hangouts — the latter lets up to 10 people participate, while others can listen without participating.

“Chatting face-to-face live as a group is perfect for those spontaneous moments where text just isn’t enough…or when you have a major case of [Fear Of Missing Out],” Facebook explained in a blog post. “It’s the best way to share the news you just got a job (or into college), have your kids wish grandma a happy birthday, tell a funny story to the people you love or just see your friends live while wearing fun 3D masks…in an everyday conversation.” 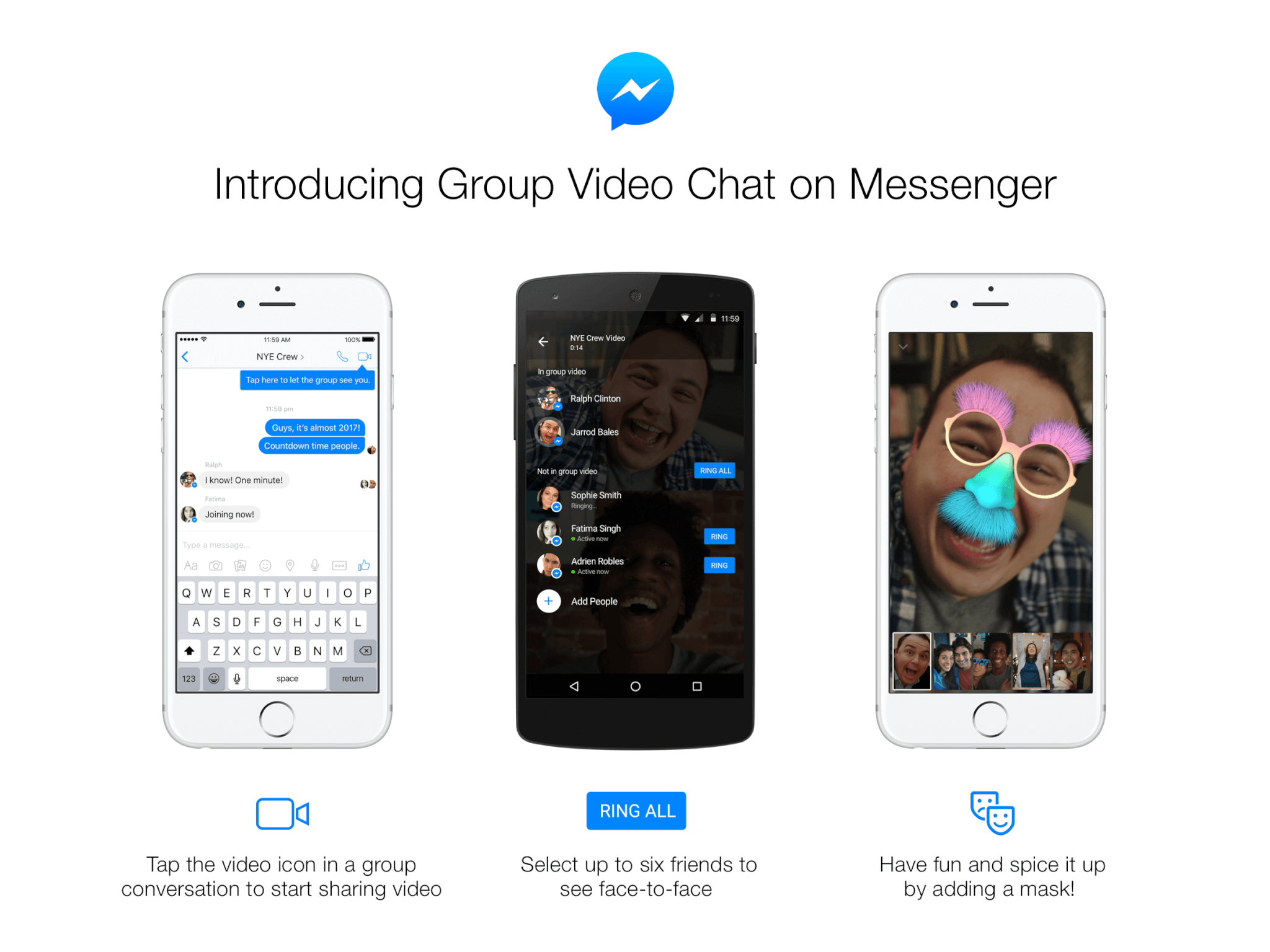 Group video chat works over data and Wi-Fi and requires the latest version of Messenger. Select a group of people you want to talk to, and tap on the video icon located in the upper right corner of the screen to enable a video chat. Everyone in the group will be notified of the action and can join when they want.

Since it is the holiday season, the release of group video chat lets people reconnect with friends and family no matter where they are around the world. If you can’t meet at Grandma’s home on Christmas or you happen to find yourself stuck at the airport because of inclement weather, go right into Facebook Messenger to converse with your loved ones. There are more than 1 billion monthly active users on the app, which already powers 10 percent of all the worldwide Voice over IP (VoIP) calls, and the addition of group video chat could certainly propel this percentage further upward.

Facebook isn’t the first one to move into this space, as it now further competes against Skype and Google. Last week, Line added group video chat for up to 200 people, and today Kik added video group chat to its app. But Messenger is the first of the Facebook properties to support group video calls — WhatsApp doesn’t currently support it.

The release comes just days after the social networking company launched a camera upgrade for Messenger that brought Snapchat and Prisma-like filters and stickers to the service. That update is only available for photos and video messages across the iOS and Android apps. Unfortunately, users can’t add those to their video chats, but Facebook said that it does support 3D masks right now, though only on its iOS app.