If you’re a user of the personal news aggregator Zite, you’re going to want to pay attention. The app is being shuttered and all data should be migrated over to Flipboard before December 7. The move should not come as a surprise, since Flipboard has been appropriating features from Zite since acquiring it in 2014.

Users received notices of the pending closure within the Zite app and also by email.

To begin migrating your content and magazines over, you’ll need to enter your Flipboard credentials or use your Facebook, Twitter, or Google+ credentials to authenticate. Then simply tap the “Migrate to Flipboard” button. 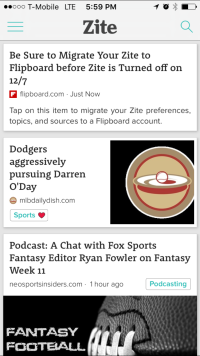 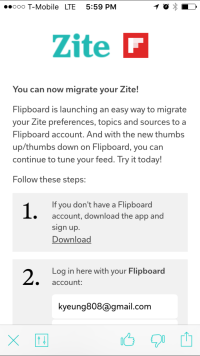 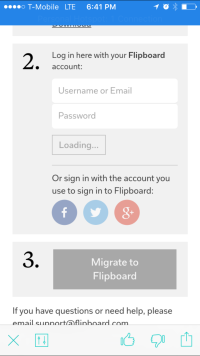 Flipboard first made serious hints about Zite’s demise in August, when it began incorporating technology from Zite that allows users to fine-tune the content they’re receiving in their Flipboard feed. Previously, Flipboard had also added Zite’s topic engine, clustered filtering to improve recommendations, and more. The most recent plucking of Zite came about in October with Flipboard’s inclusion of the interest graph to help brands better target their ads on the platform.

The process of integrating Zite into Flipboard has been gradual, probably because the Mike McCue-led firm wants to protect the user experience as much as possible. And while the closure is bad news for Zite fans, it also means resources will no longer be diverted to a service that hasn’t really received any updates since it was bought buy its competitor.

Zite was founded as a tool to deliver personalized news to your iPad. It emerged when the marketplace was flooded with the likes of Gravity, My6Sense, and of course, Flipboard. What drew most people to the service was its personalization algorithm that promised to provide relevant content based on preferences and reading habits.

Eventually the company was acquired by CNN for reportedly between $20 million and $25 million. It remained a standalone entity within the cable news network for three years, until Flipboard got involved in 2014. Alone, Zite would have had to stand up against Flipboard, as well as new players like Yahoo News Digest, Circa (until its shuttering), Apple News, and others.

Update: A Flipboard spokesperson provided this statement to VentureBeat: “We wanted to ensure that Zite’s key functionality was available in Flipboard before asking users to migrate. Now that we’ve integrated all the major parts of the technology such as the topic engine, collaborative filtering algorithms and thumbs up and down voting, Zite will soon stop being available as its own app. Zite users have a few more weeks to import their preferences into Flipboard. We hope many of them will do this.”