FreedomPop, the mobile virtual network operator (MVNO) that offers SIM cards with completely free basic mobile service plans, is expanding the scope of its service today with the launch of an online store for refurbished smartphones.

Founded in 2012, Los Angeles-based FreedomPop has so far built its business on giving away limited text messages, talk time, and mobile data in the hopes of “upselling” to those who need more. It had been an entirely U.S.-focused affair since the company’s inception, but it went international for the first time last September with a U.K. launch, followed by a launch in Spain in April — FreedomPop’s first new market launch after closing a $50 million funding round.

Now FreedomPop is bringing the world FreedomShop, an online store that promises pre-owned versions of “every Android and iOS” smartphone from the major manufacturers over the past three years. 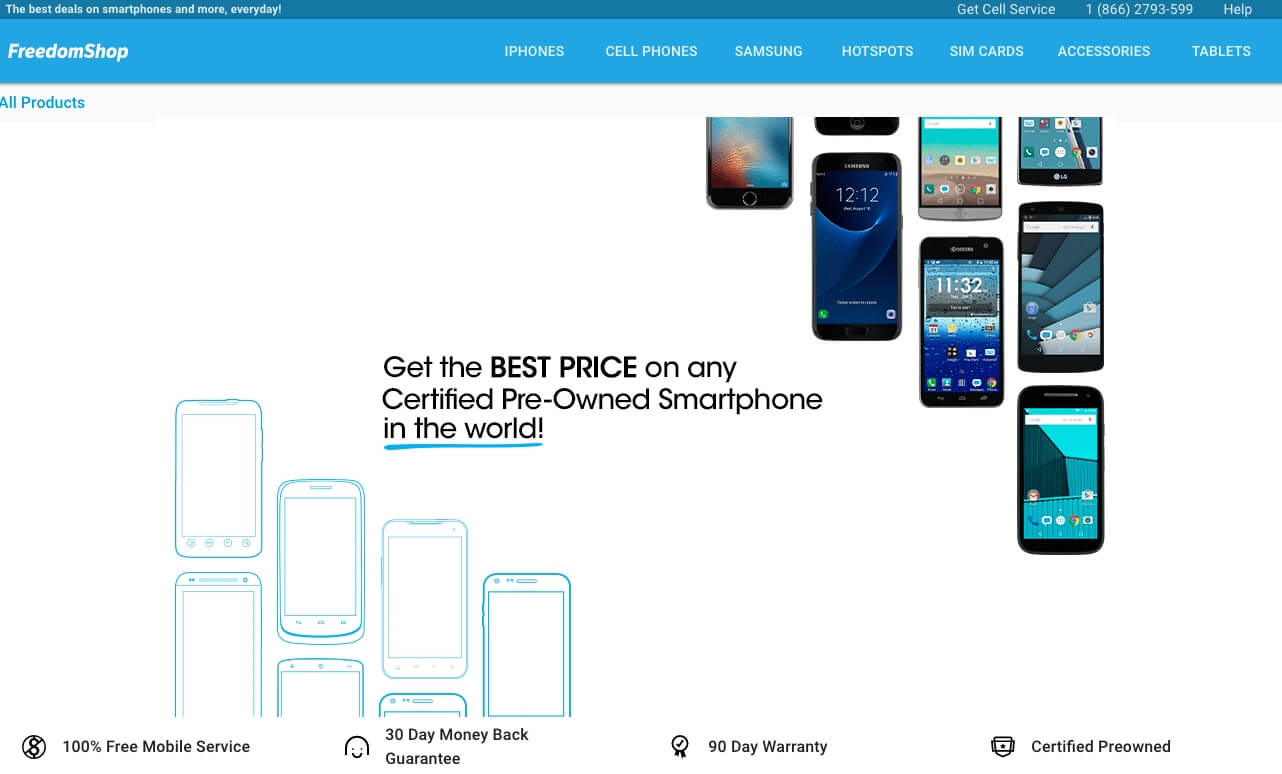 The refurbished mobile phone market is said to be a $17 billion business, with 120 million smartphones selling for an average of $140 each year. So FreedomPop is entering potential money-spinning territory as it takes on a realm that has hitherto been cornered by the likes of eBay, Amazon and, to a lesser extent, your local pawn shop. But smartphone companies have taken note of the opportunity, with Apple recently beginning to sell refurbished iPhones through its own website, too.

FreedomShop promises pre-owned phones at “up to 80 percent less” than their shelf price, and at launch offers in excess of 100 different models from Samsung, Motorola, Apple, and more. But what is the real selling point here? After all, it’s already pretty easy to buy second-hand smartphones. Well, FreedomPop’s store also serves as an important channel to cross-sell a package that includes its SIM cards, which come with 100 voice minutes, 500 SMS, and 200MB of data for free each month.

Additionally, FreedomPop hopes that its quality assurance will give prospective buyers peace of mind — all phones come with a 30-day money back guarantee and a 90-day warranty.

The company has raised more than $100 million in funding from some notable names in the technology and venture capital industry, including Skype cofounder Niklas Zennstom’s Atomico, Intel Capital, LetterOne, Mangrove Capital, DCM, Partech, and Axiata. Armed with this cash, FreedomPop said that is has invested heavily in setting up relationships with more than 200 refurbished smartphone suppliers, including “multi-billion dollar logistics players” that manage trade-in programs for U.S. carriers, as well as “small mom-and-pop” wholesalers.

“We have spent tens of millions of dollars building this expansive and unique supply chain, putting us in a unique position to undercut the typical re-sellers found on eBay or Amazon,” explained FreedomPop CEO Stephen Stokols.

The beginnings of FreedomShop can be traced back more than three years, when Stokols went on the hunt for refurbished devices to accompany his firm’s SIM cards, and he ended up on the docks of Long Beach, California, with “$400,000 in cash and a pallet of used smartphones” that had originally been packed for a trip to Asia. “I realized then that the market for refurbished phones is not only massively fragmented, but too scrappy for large companies to really play,” added Stokols.

FreedomShop is an obvious extension of FreedomPop’s current business, and devices will initially only ship to addresses in the U.S., U.K., Spain, and Mexico, with inventory locations spread across all regions.