Google is rolling out a new interface overhaul for Gmail on mobile devices, a move that fits with the company’s broader mission to make its G Suite apps “look and act like a family of products,” according to a statement issued by the company today.

The internet giant has been overhauling its various web apps with its updated Material Design language in mind. Last year Gmail on the web received a substantial overhaul that included a new look and a bunch of new features, while in the subsequent months Google debuted updated Material Design guidelines, which were intended to help app designers and developers work with the original Material Design philosophy but with their own distinctive brand style in mind. Google refers to this as “Material Theming,” and it’s something the company is applying across its own myriad applications.

The company has teased the Gmail for mobile Material update previously, but it will now be rolling out to both its Android and iOS apps “in the coming weeks,” it said, covering phones and tablets.

In this side-by-side comparison below, you can see how different the new design is compared to the existing incarnation — gone is the red bar at the top, and in its place is a giant search box. The user’s profile picture is also now located on the right-hand side in the main screen, rather than tucked away inside the navigation drawer.

Additional updates include the ability to view attachments such as photos and documents more quickly, without having to open an email or scroll through conversations — attachments are visible from the main inbox view, which you can just tap to open. 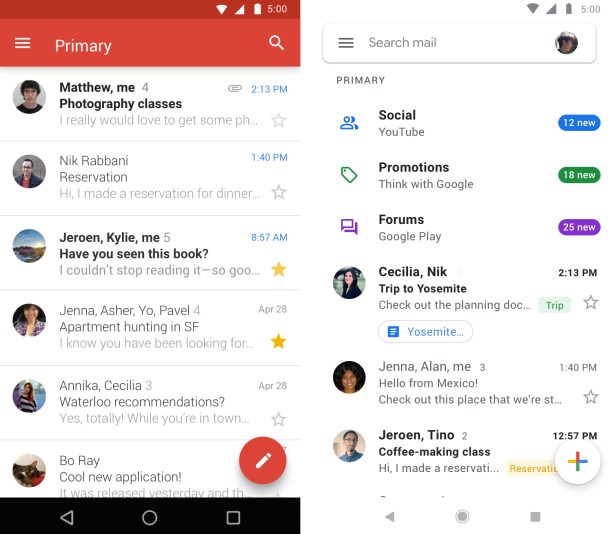 Above: Gmail for Android: Material update

Additionally, switching between multiple Gmail accounts is now a lot easier and can done by tapping the profile picture in the main screen, while users will now see a giant red warning sign on emails that are suspected of phishing. 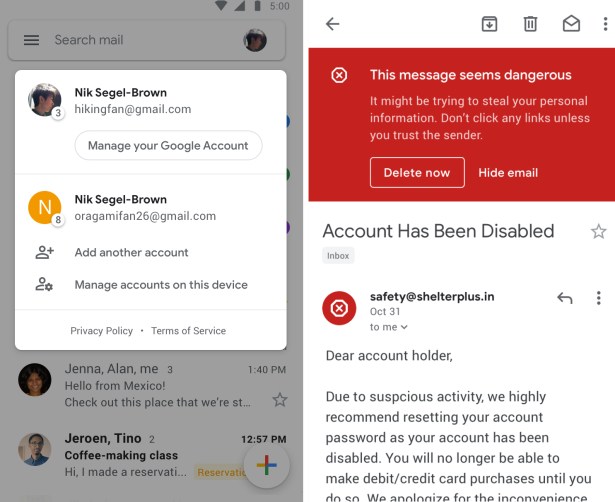 Anyone who has been using Gmail, and other Google properties, on the web over the past 8 months or so will already be familiar with this refreshed look and feel. Indeed, Google has already rolled out Material-focused updates on the web to Calendar, Drive, and Docs / Sheets / Slides / Sites, while the company has updated Calendar for Android with the new Material Theme.

Now, Google is turning its attentions to the mobile versions of its other services too. And later this year, the company said that it plans to update the rest of its G Suite mobile apps with a similar redesign.