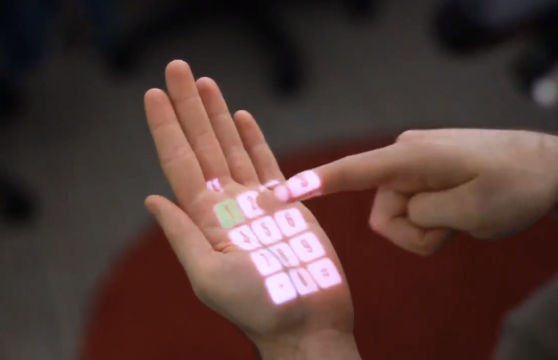 While there’s sure to be lots of data coming out of Google Glass, the big question is how users are going to get information into the device.

So far, Google’s answer has been “voice recognition”, but a recent patent the company filed points to something slightly more interesting: lasers.

The “Methods and Systems for a Virtual Input Device” patent that Google filed last year describes a system wherein a combination of projector and camera are used to create and detect inputs. In theory, this could allow Google Glass to make up for its lack of a keyboard by making the whole world its keyboard.

The idea itself isn’t particularly new. Researchers at Microsoft have been working on a similar concept, dubbed “OmniTouch,” since at least 2011. Like Google’s patent, OmniTouch lets users interact with their devices using ad hoc input interfaces projected onto their hands, arms, and environment.

Google’s patent, however, pushes the concept a bit further. Because Glass comes with a built-in display, the technology also lets users make inputs solely using gestures, which the camera can pick up an interpret. As a result, there are many use cases where the device won’t need to project a keyboard at all.

Now all Google needs to invent is a time machine. I want this stuff yesterday.