“I feel we’re moving into a world that was described pretty accurately by one of the founders of Google,” Chomsky said. “Some reporter asked Eric Schmidt if this was an invasion of privacy … and he said, ‘If you’re doing anything that you don’t want to be on the Internet, you shouldn’t be doing it.'”

Here’s the interview with Laura Flanders of GRITtv:

Chomsky, who also calls Google Glass “a way of destroying people” and “ridiculous,” makes at least one pretty significant mistake, however. He said that Google Glass has a camera and a recorder, “which means that everything that’s going on around you goes up on the Internet.” 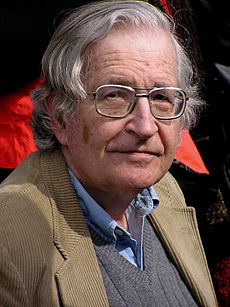 It’s a pretty big leap from Google Glass having recording capabilities (much the same as any smartphone or even digital camera) to say everything that happens near it is going up on the Internet. That leap would require significant hacking of Google Glass or a secret backdoor in the software that surreptitiously activates “spy mode” or something similar. And frankly, that would be fairly easy to detect — either from the source code (which is open) or from your mobile-data usage, which would skyrocket.

Interestingly, I was talking to a nontechnical person about exactly this subject yesterday, and she said that she just assumes that anything she touches digitally can be surveilled, spied on, and used by government agencies … which points to a significant challenge that Google in particular but tech companies in general have with trust and privacy. Particularly, of course, post-PRISM.

Schmidt’s comment, which has been much reported, is obviously wrong-headed. But I’m not so certain that Google Glass, properly constructed and openly available, should be tattooed with the sign of the beast.

Chomsky is obviously a giant of modern science — the most cited living scholar during 1980 to 1992 and the eighth-most cited overall. And he’s no idiot. The clip is just a short one, and I’m sure that Chomsky would elaborate and probably add some context and tone to his comments in a longer discussion.

So I’m sure he could add some nuance to his comments that would take away a little of the hysteria and add a little more sense.