Google today is announcing the launch of App Maker, a new service that people inside organizations can use to easily develop custom applications based on their business needs. Google is now taking applications for early access to the tool from organizations that pay for the G Suite (formerly known as Google Apps) Business service tier.

The service lets users drag and drop widgets around on a user interface that complies with Google’s Material design principles. But they can be customized further with scripts, as well as HTML, CSS, JavaScript, and JQuery content. And once apps are live, it’s possible to monitor usage through Google Analytics. 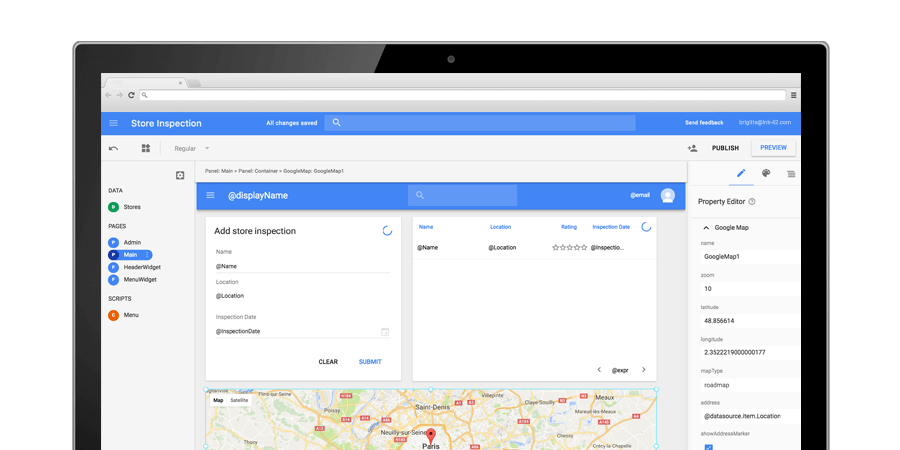 In being easy to use by default, App Maker will be useful for people who are less technically savvy — people other than full-time developers, in other words. Having this sort of thing available means that IT teams can spend less time dealing with requests from these types of people, who might not otherwise see their ideas ever fleshed out.

“We’re really targeting enterprise developers who need to build line-of-business solutions for an entire company but need there to be less (sophistication) than developers who might build Snapchat or external-facing applications,” App Maker product manager Ajay Surie told VentureBeat in an interview.

That means App Maker will compete with existing “low-code” application development services. That includes Salesforce’s App Cloud, as well as tools from Appian, Mendix, and OutSystems, among others.

There’s no need to worry about maintaining the necessary infrastructure for running the apps. Apps built with App Maker run on the same data center infrastructure as Gmail, Google Calendar, and Google Drive. This is different from the cloud computing and storage infrastructure that people can pay for through the Google Cloud Platform.

New data that’s generated inside Apps built with App Maker can be stored in a new service called Google Drive Tables, which is essentially a managed structured database that stores data in Google Drive. It’s simpler to set up and maintain than something like Google Cloud SQL from the Google Cloud Platform.