I’ve been using Google’s Project Fi cellular service on the LG Nexus 5X for the past two months, and I like it a lot. I recognize that it’s not for everyone — currently it works in just three Android phones — but for some people, it’s worth trying out at least.

Google isn’t relying on its own mobile network to deliver Project Fi. It’s a mobile virtual network operator (MVNO) that uses Sprint and T-Mobile’s networks, as well as Wi-Fi connections when they’re available.

The word Project in the name is a giveaway about the nature of the service within Google as a whole and its recently formed umbrella company, Alphabet. Fi is ultimately an experiment in a new market, an area where Google does not have a track record. Google does this on the regular. It’s possible that Fi could one day resemble, say, Google Fiber in terms of its adoption and industry impact, but it’s also possible that Google could discontinue the service.

Here are some of my thoughts after using Fi for my main phone for the past two months.

The first thing you have to talk about when you talk about Project Fi is how much it’s going to cost you. And my experience so far has been very positive in that department.

You can get started at $20 per month for unlimited calling and texting and $10 for every gigabyte of data you want to use a month. So I pay $80, with 6 GB of data allotted. I get credit back for any data I don’t use, and I only pay extra based on exactly how much I go over my plan. It’s great. 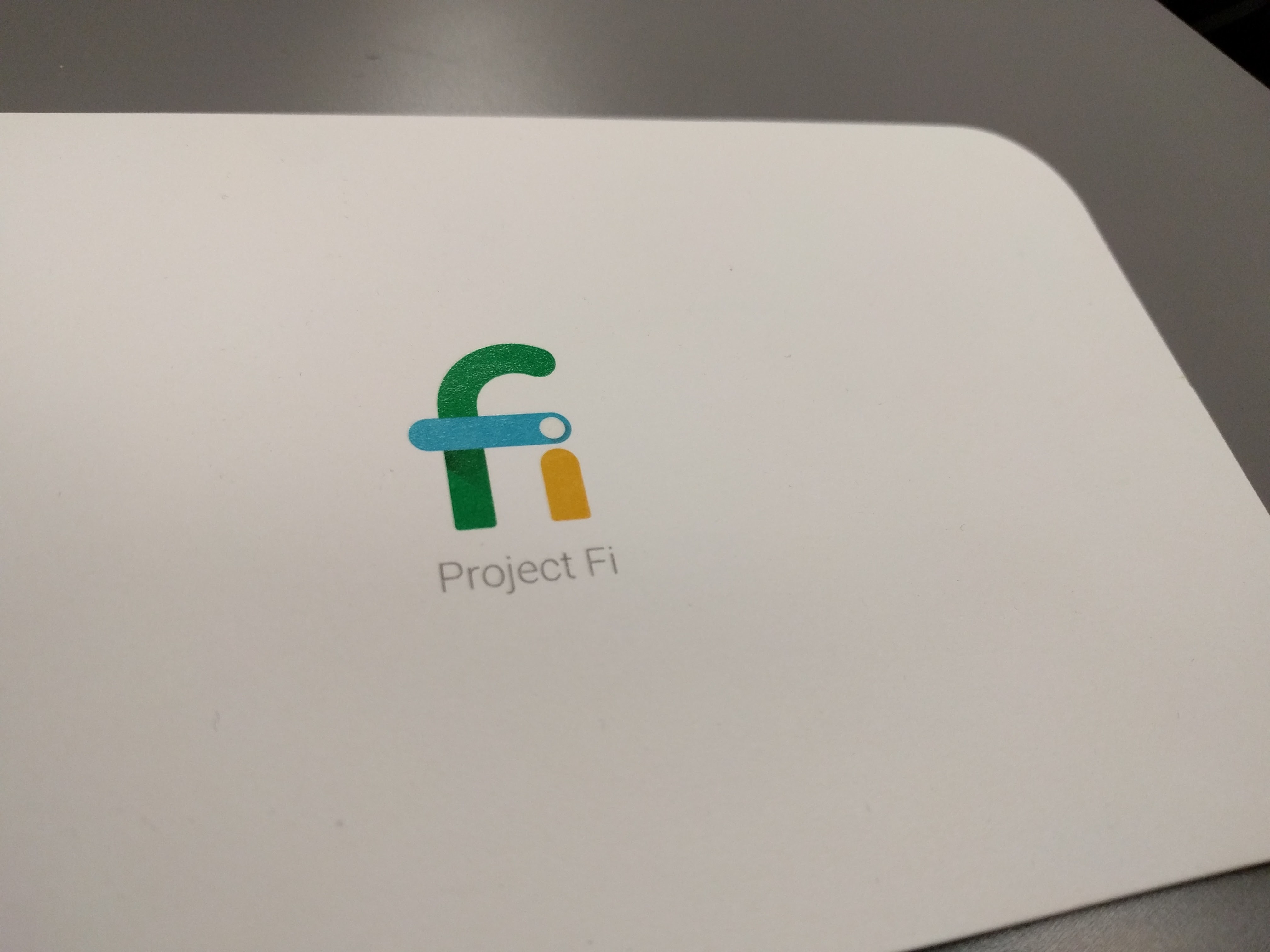 Above: I started using the Project Fi SIM card after our Nexus 5X review unit came in.

For my main phone — a 2014 second generation Motorola Moto X — through the recently launched L (for large) talk, text, and data plan from Verizon, I now get 6GB of data for $60 per month, but that’s on top of various fees, including a $40 smartphone line access fee. My monthly Fi bills are generally lower. In other words, I would save money by ditching my Verizon account and switching to Fi.

Fi’s Wi-Fi Assistant feature should be part of any discussion about the economics of the plan. The feature connects your device to free high-quality Wi-Fi networks and thereby prevents unnecessary data plan consumption, without requiring tinkering on your part. It’s the type of technology that helps stave off overage charges, month after month. And it’s the type of thing I could imagine AT&T and Verizon adopting because it’s so smart.

I actually like getting my Project Fi monthly statements. Isn’t that crazy? They are just so simple and pain-free and predictable. They are what telecoms should aspire to.

Here’s what I mean: 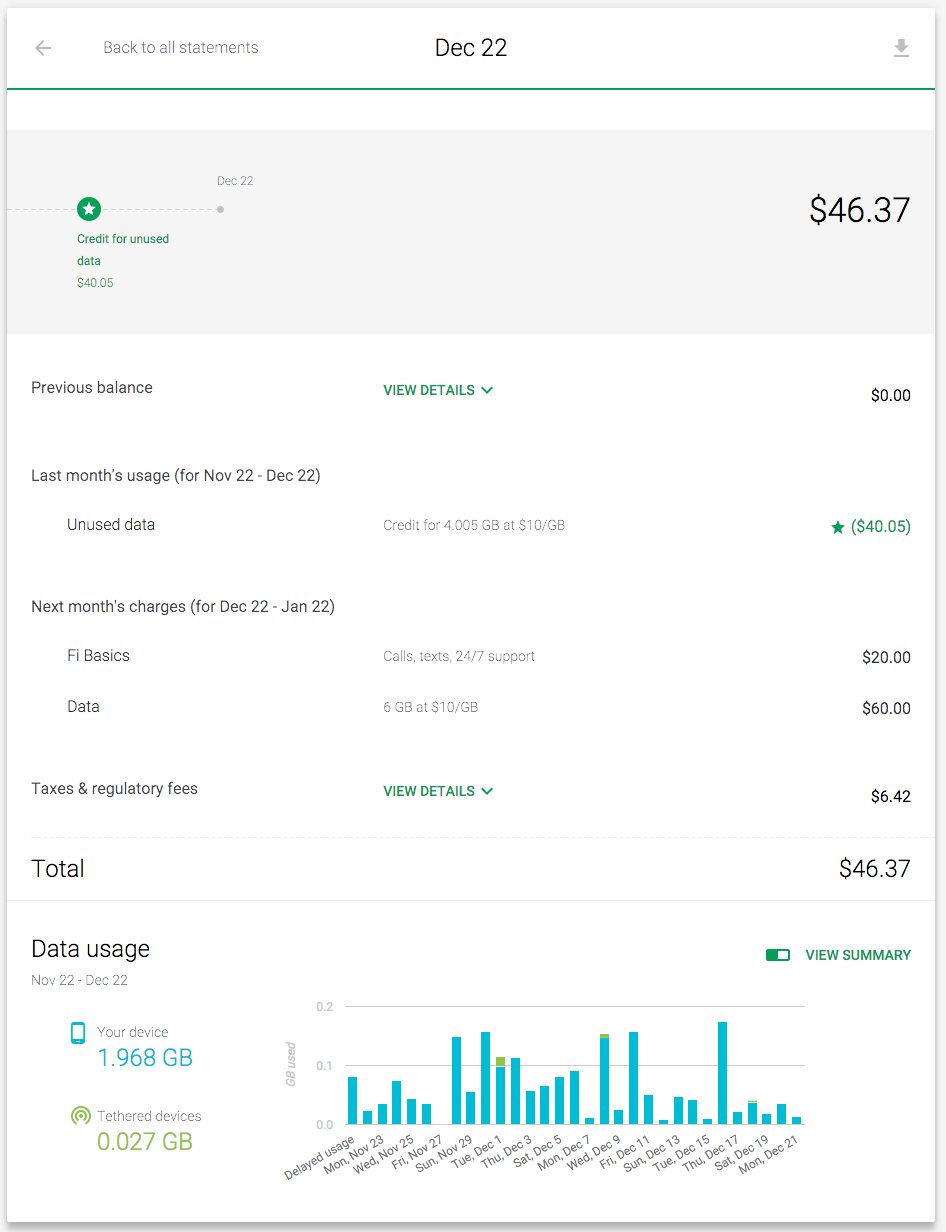 Above: A Project Fi bill.

There are no endless tallies of mysterious fees. What is there is a nice, simple chart showing data usage for every day of the month, including tethering.

Of course, the statements look great in the Fi app on your phone. There are no PDFs to zoom in on.

If you have questions, you can get technical support 24 hours a day and seven days a week. The app shows that if I want to call in and leave a message, a Fi rep will call me back within one minute, and that I can get a reply to an email inquiry within one to four hours. This might not scale if and when Fi becomes more widely used, but for now it’s excellent.

The surprising thing about living with Fi is that it isn’t slow — because that’s what I was expecting.

Using the Speedtest.net app, I tested Wi-Fi and regular cellular network connections for Fi and Verizon in 10 locations in the Bay Area. Believe it or not, Fi was faster than Verizon more than half the time, across both Wi-Fi and cellular networks, for both uploading and downloading. For instance, once in San Jose I got a 29.84 Mbps download speed on Fi over LTE and 6.69 Mbps on Verizon. 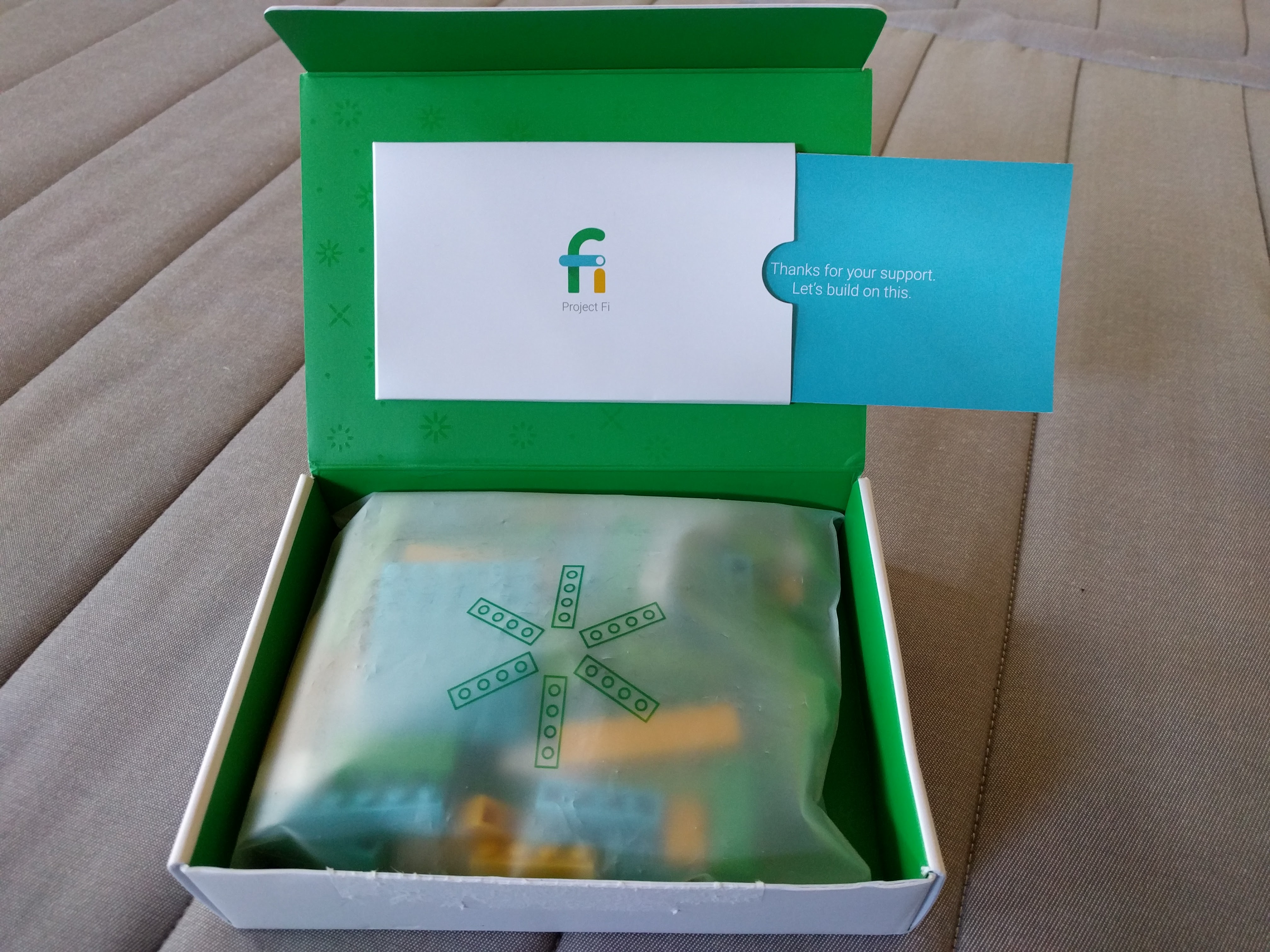 Above: Aww, thanks for the Project Fi Lego set, Google.

I definitely could run these tests more frequently and in more places to arrive at a more meaningful data set. Still, I do have a little bit of data suggesting that Fi isn’t always slower than a top-tier network.

And that lines up with my actual experience. While using the 5X on Fi from day to day, I never once found myself reaching for my Moto X with the hope of getting faster Internet service.

With Project Fi you get unlimited calling, so the plan’s support for Wi-Fi calls is not absolutely necessary. But I found that when Fi routes calls over Wi-Fi networks, it isn’t good.

I found the call quality to be choppy or distorted or both. I would answer calls and not hear anyone on the other end for a few seconds. It was so frustrating that I felt I might as well not take the call and have people contact me in some other way instead. On the Project Fi subreddit I found a few other people complaining about Wi-Fi call quality.

This happened to me particular when I was indoors, so it’s not very common — maybe one out of 10 calls would go to Wi-Fi in my testing. 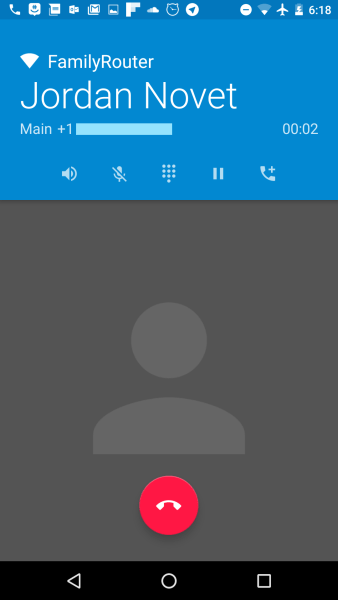 Above: You can receive calls over Wi-Fi even when in airplane mode.

Fortunately, I’ve discovered a fix. You can turn off Wi-Fi calling inside Android’s standard-issue Phone app. It’s as simple as opening up the app’s settings section, tapping Calls, tapping Wi-Fi calling, and switching the toggle to the off position.

At least in the Bay Area — and in some other metropolitan areas in the United States, like Boston, New York, and Portland — the Fi network is usually sufficient for calling, so turning off Wi-Fi calling generally won’t leave you stranded.

There are a couple other small issues I should point out.

First, Project Fi currently only works with just three mobile devices: the Nexus 5X and Nexus 6 from Motorola and the Nexus 6P from Huawei. If Google wanted to distinguish Android phones from iPhones, Google could extend Fi across all of Android. And if Google wanted to really freak out AT&T and Verizon, the tech giant could make Fi work on any phone. But for now, it’s limited in availability. 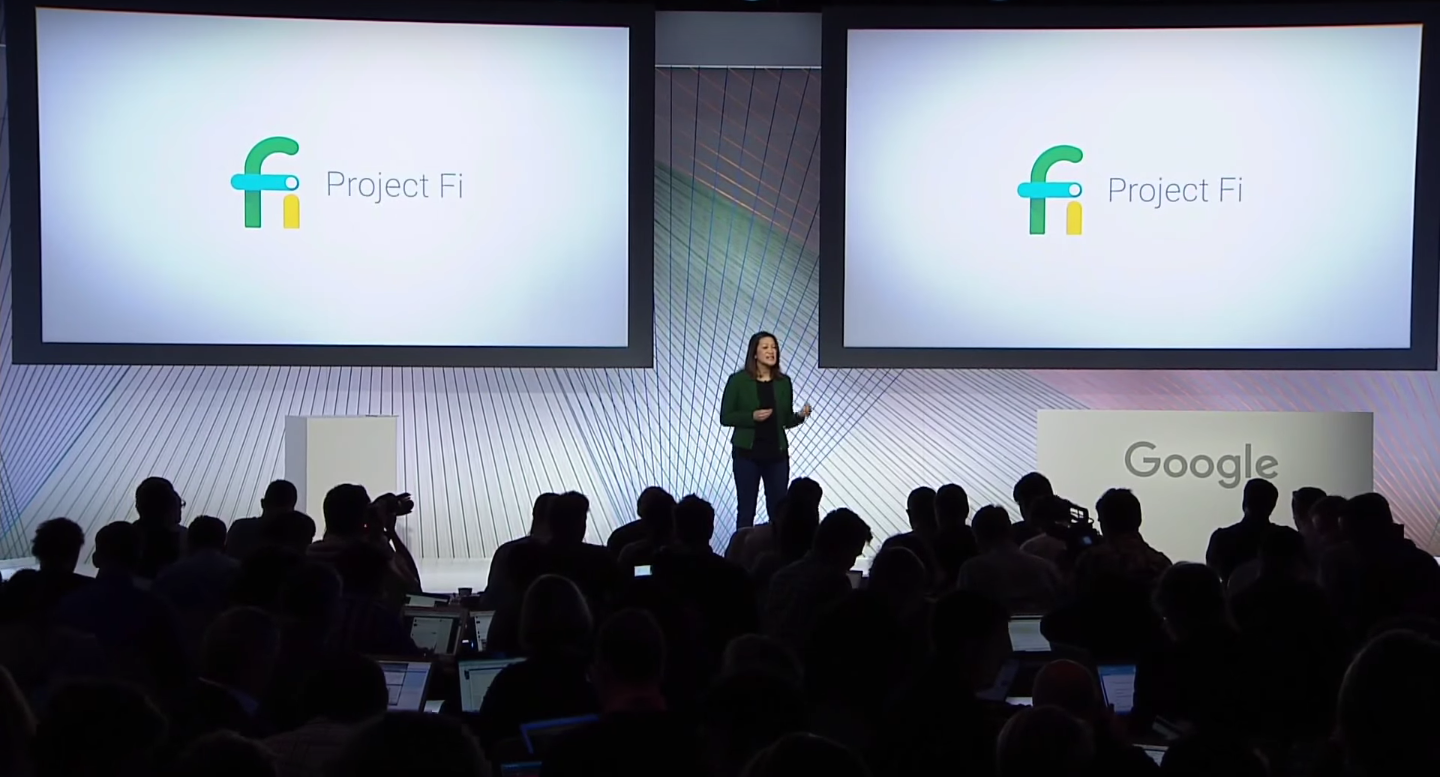 Above: Google director of product management Sabrina Ellis announces that the Nexus 5X and 6P will support Project Fi at a press event in San Francisco on September 29.

The second issue has to do with the Fi data-only SIM cards that you can order for additional devices once you’ve started using Fi in one of the three aforementioned phones. The data-only SIM cards are officially compatible with a few tablets: Apple’s iPad Air 2 and iPad Mini 4, Asus’ Nexus 7 LTE, HTC’s Nexus 9 LTE, and Samsung’s Galaxy Tab S. Google says its Fi data-only SIM cards may well work in other devices but that it “might not be able to help you activate or troubleshoot these other devices.” That’s not very reassuring.

Depending on where you go, the data-only SIM cards only provide you with a 2G or 3G network connection, not the fast 4G LTE that some consumers have come to expect. See the coverage map for more detail on this.

But even with these quirks, Project Fi is impressively good, given how new it is and the high standards that consumers have when it comes to cell service.

I just hope Fi goes beyond being called a project and into something that’s a little more permanent for Google, so that over time it can pick up greater scale and start competing more seriously with the biggest cellular carriers.