Google this week released Chrome 46, adding a slew of new developer features and simplifying the page’s security icon. But the biggest change turns out to be the removal of a feature: The “OK Google” hotword to trigger voice search is no more.

Google first launched an “OK Google” voice search Chrome extension in November 2013. The company then built the feature directly into the browser with the release of Chrome 35 in May 2014. Chrome users simply had to visit Google.com, or open a tab if Google was their default search engine, and say “Ok Google” to start searching. 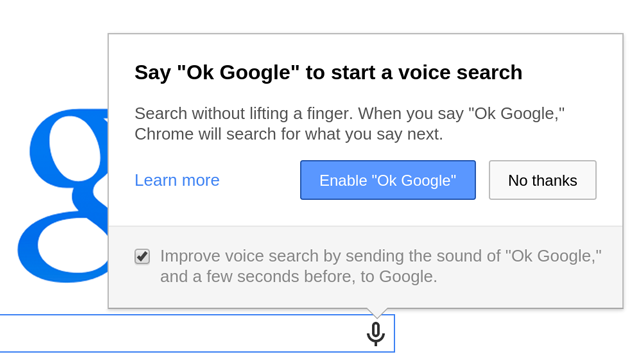 The removal of this feature only affects the desktop version of Chrome: Windows, Mac, and Linux users no longer have the ability to use the “OK Google” voice action. Users of Chrome for mobile, as well as Chromebooks, will still be able to say “OK Google” and start searching.

Furthermore, we want to emphasize that this doesn’t mean voice search in Chrome for desktop is going away. You can still access the functionality on the New Tab Page and on any Google.com page — you’ll just have to click on the mic icon first.

So why was “OK Google” removed on the desktop? As you might have guessed, Google decided to axe it because not many users were taking advantage of the feature “on these platforms.”

This is really not a big surprise: Talking to your phone will simply always be easier to wrap your head around than talking to your computer. Not to mention, all phones have microphones, but the same can’t be said for desktops.

Google gave a similar explanation this week when it announced that Chrome for desktop would be losing another feature: The notification center. “In practice, few users visit the notification center,” it said. That removal will occur with the release of Chrome 47, which is slated to arrive in about six weeks.