Google today announced plans to kill off the Chrome app launcher for Windows, Mac, and Linux in July. The tool, which lets users launch Chrome apps even if the browser is not running, will continue to live on in Chrome OS.

But the functionality is about to disappear. In a few weeks, when a user installs their first Chrome app, the browser will no longer enable the launcher by default. If you already have the Chrome app launcher, you will receive a notification explaining that it is going away. In July, existing instances of the launcher will be completely removed for all desktop users. 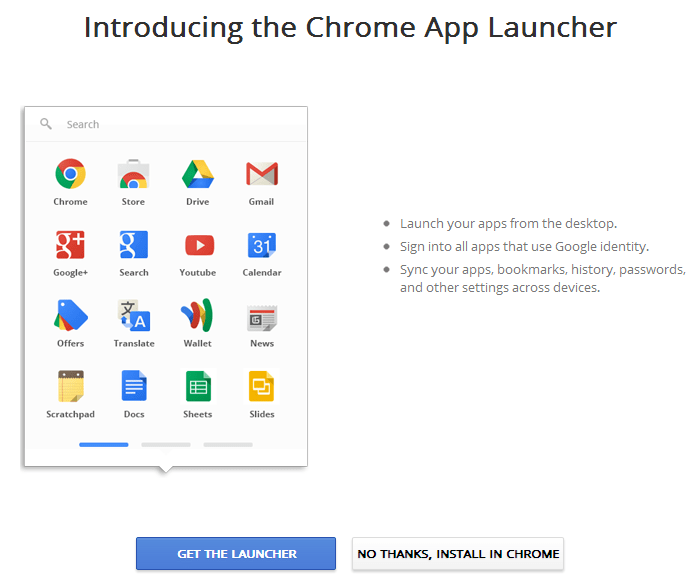 So why is Google removing the Chrome app launcher from Chrome? Well, it turns out Google has finally figured out what everyone all already knew: “we’ve found that users on Windows, Mac, and Linux prefer to launch their apps from within Chrome.”

Indeed, in today’s announcement, Google referred to the removal of the notification center as part of “Chrome’s continued emphasis on simplicity and streamlining browser features.” Google has been slowly but surely peeling back features that have made Chrome feel like more than just a browser. In other words, functionality that made Chrome “bloated” — a term power users reserve for software that gets overloaded with extra features. It looks like the company is finally realizing that users don’t want a browser-operating system hybrid on top of their existing operating system.

To be clear, Chrome apps are not going away. You can still launch an app by either clicking on its shortcut in the bookmarks bar or by typing chrome://apps in the omnibox and selecting it.