It’s taken off like wildfire. Following on the heels of an $18 million series B raise in February, Healthy.io today announced that it’s secured $60 million in a series C funding round led by Corner Ventures, with participation by Joy Capital and previous backers Ansonia Holdings, Aleph, and Samsung Next. CEO Adiri said the fresh capital, which brings Healthy.io’s total raised to about $90 million, will accelerate Healthy.io’s global expansion and product development.

Healthy.io additionally announced that it’s received its second 501(K) clearance to date from the U.S. Food and Drug Administration (FDA), this one for its smartphone-based ACR test. (Its first clearance was for Dip.io.) FDA clearance through the 510(k) process means the agency agrees with the manufacturer — Healthy.io — that its product is similar to a previously approved product.

“The smartphone has the potential to be the great equalizer of healthcare,” Adiri said. “To unlock this potential, companies must adhere to the highest clinical standards. Our second FDA clearance and additional funding allows us to expand access to critical tests and care beyond our first 100,000 patients in Europe and Israel, making it a reality for millions of Americans suffering from diabetes and hypertension, who are at risk for chronic kidney disease.” 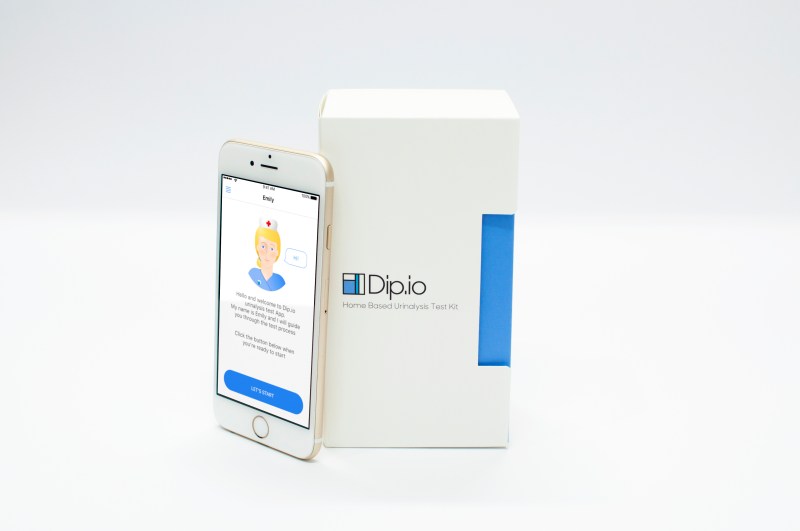 Healthy.io’s tests were designed with ease of use in mind. Patients wait for the colors on the included dipstick to develop and snap a picture against a card with the companion app, after which the image is anonymized, tokenized, and beamed to the cloud for diagnostic tests. The medical-grade CE and ISO 13485 certified-for-sale kit performs urinalysis for a range of illnesses, infections, and pregnancy-related complications. Specifically, it tests for ketones, leukocytes, nitrites, glucose, protein, blood, specific gravity, bilirubin, urobilinogen, and pH — markers that span pathologies from urinary tract infections to ketosis, kidney disease, pregnancy health, and bladder cancer.

For patients, the benefits are obvious: Taking pictures of urine samples is much less inconvenient than driving to a nearby hospital. As for clinicians, such at-home tests thin out waiting rooms and help hospital staff prioritize urgent cases. “If you look at the exponential growth around the smartphone camera … it makes sense to leverage this growth to [use] it for diagnostic purposes,” Adiri told VentureBeat in an earlier interview. “[Patients] don’t have to go to the lab anymore.”

Dip.io is highly effective, Adiri adds, both at encouraging patients to test themselves regularly and at revealing signs of kidney dysfunction. In a triple-blind study with 500 subjects, 99% of people were able to complete a test. In an assessment of patients with hypertension conducted with Geisinger Health in conjunction with the U.S. National Kidney Foundation, adherence rates were 71%. And separately in the U.K., where Dip.io is available through a virtual renal clinic program launched in June by an NHS clinic in Yorkshire, 10% of patients who took the test were found to have elevated levels of protein indicating previously undetected kidney disease.

“Today’s health system doesn’t make it easy for patients to get the care they need. Healthy.io is tackling this problem by meeting patients where they are, on their smartphones, and turning smartphone cameras into a clinical-grade medical device,” said Aleph general partner Michael Eisenberg. “We are proud to support a company that can meet the highest FDA standards, while creating products that make life easier and more convenient for patients.”

Dip.io is already being used by 100,000 patients via Healthy.io’s strategic partnerships in Europe and Israel, Adiri says, and has secured an FDA 510(k) clearance in the U.S. The firm’s also inked a global partnership with Siemens Healthineers, and it recently announced the launch of a cystitis testing service in more than three dozen Boots UK stores in London, Sheffield, and Cardiff. (Boots UK is a subsidiary of Walgreens parent company Walgreens Boots Alliance.)

Healthy.io is currently focused on international expansion, Adiri says, but its offerings won’t be limited to urinalysis tests in the future. The startup’s in-development dermatological product has patients stick a plaster with colored hexagons near a patch of skin and snap a photo with a smartphone app. Computer vision algorithms correct and standardize the image, and, as with Dip.io, send it to the cloud for analysis.

As part of this latest funding round, former executive vice president of Aetna Gary Loveman joined Healthy.io’s board of directors. Loveman was an associate professor at the Harvard University Graduate School of Business Administration for nine years and he holds a Ph.D. in economics from M.I.T.