Basil Harris is like a real-world Dr. McCoy. He and his small team at Final Frontier Medical Devices have created a Star Trek Tricorder, like the fictional one that Bones McCoy carried around in the TV series decades ago. And they did such a good job in their five-year journey that they recently won a total of $3 million in prizes in the Qualcomm Tricorder Xprize contest.

I interviewed Harris at an event at Silicon Valley Comic-Con, which takes place Friday through Sunday at the San Jose Convention Center in San Jose, Calif. With its blend of fictional entertainment and real-world technology, the Tricorder is just the kind of gadget that fits well at the show.

“I still can’t believe it,” Harris said about winning the prize, which included milestone money and a $2.6 million final award.

Harris showed off DxtER (pronounced Dexter), which is a collection of devices that measure your vital signs. When Harris demoed it to me, I could tell he was a little nervous, as his blood pressure was high. I could see it on the iPad tablet that was receiving a signal from the sensor attached to Harris’ body.

The devices — such as sensors you strap to your side — are meant to empower patients. 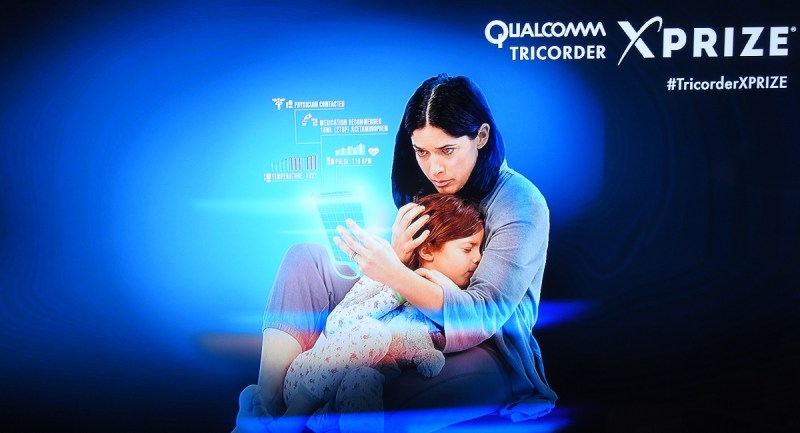 Above: The Qualcomm Xprize Tricorder contest.

“We wanted to put Dr. McCoy in the device, so that you don’t have to rely on the medical doctor for everything,” Harris said. “The Xprize foundation said you not only have to give the information, but you also have to program Dr. McCoy into it so someone with no medical knowledge can operate it.”

The Xprize contest required contestants to be able to diagnose 13 conditions and monitor five vital signs. Harris, who is an emergency room doctor, and his brother George led a team of seven at the company (also known as Basil Leaf Technologies) that worked on nights and weekends to create DxtER. The prototype can now detect 34 conditions, but before bringing it into the world Harris said it will need to detect more than 100 conditions to be really useful.

It currently detects conditions such as stroke, anemia, diabetes, tuberculosis, Hepatitis A, and others. If your vital signs reach dangerous levels, it could give you a warning about the risk of an imminent stroke or heart attack. Harris is targeting a price of around $200. That’s not a bad deal.

But Harris adds, “We’re not trying to replace the doctor. We want you to have this information so you can interface with the doctor.”

The device has a couple of sensors that attach directly to your fingertips. Over time, Harris wants to shrink that down into the form factor of a watch. That part of the device shines infrared light into your finger and detects your blood flow. From that, it gets data on your white blood cell count and your heart rate. It also has sensors strapped to your side that measure your EKG details. It sends that data via Bluetooth to your smartphone.

“We do it all non-invasively, getting a reading on glucose, hemoglobin count, and white cell count without drawing any blood,” Harris said. 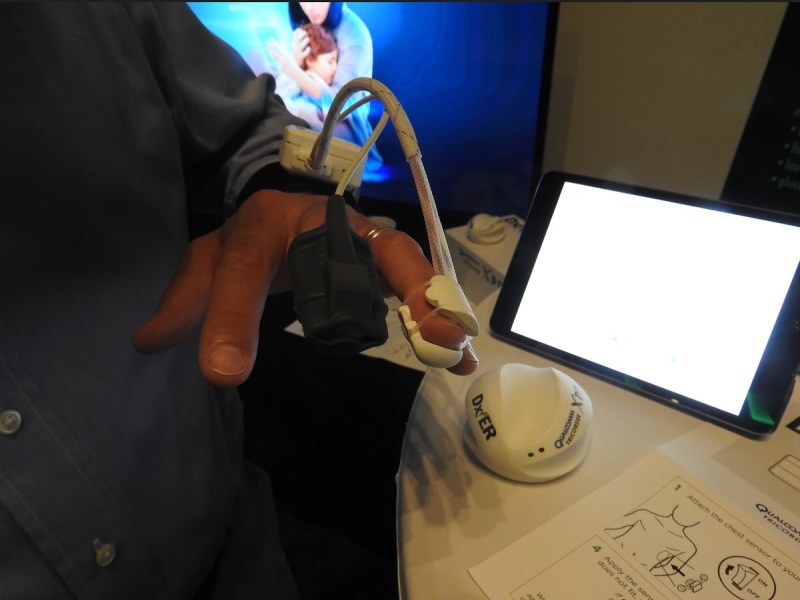 Above: Elements of the DxtER tricorder.

The nonprofit XPrize Foundation was started in 1995, and it organizes contests designed to spark big leaps in innovation.

The Harris brothers grew up watching Star Trek. While Basil Harris was interested in medicine, George Harris became a network engineer. The combination of their skills helped them create the tricorder.

The team has built 65 devices so far, and these have all gone through testing at the University of California at San Diego. The device is now going through testing with the Food and Drug Administration, but it might be about three years before all of the tech comes to the market, Harris said.