Aiming to capture and hold the attention of young students, the U.S. Holocaust Memorial Museum has launched a smartphone app that allows visitors to view a museum exhibit in augmented reality.

The Washington, D.C.-based museum’s app lets visitors learn more about the lives of Lithuanian villagers who are featured in the Tower of Faces display. When they point their smartphones at photos in the exhibit, information pops up on the phone screen describing the life of the villagers.

The AR exhibit is important, since a study released in the spring reported that two out of three American millennials don’t know what the Nazi death camp Auschwitz was, and nearly half (49 percent) cannot name any ghetto or concentration camp.

As part of a long-term project to deepen young people’s knowledge about the Holocaust, the United States Holocaust Memorial Museum last year experimented with AR to give visitors a different and unique experience: a personal connection to the families who lost their lives during the Holocaust. About 80 students participated in the pilot program already, with plans to add more participants next year.

Viewers can learn about the individuals photographed, including whether they perished during the Holocaust. 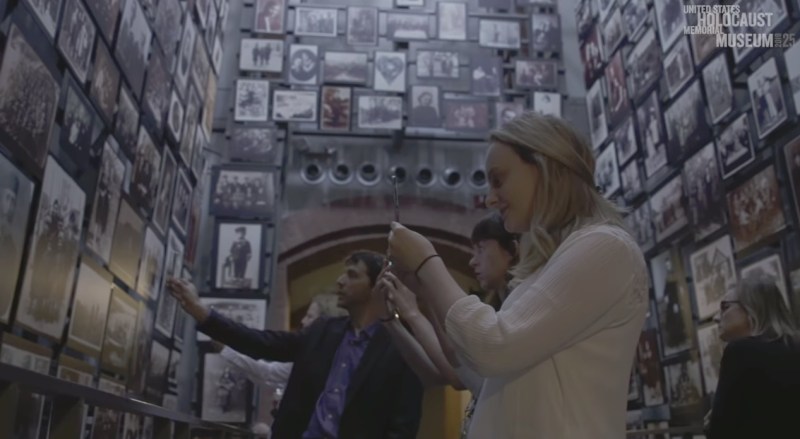 Above: Augmented reality app at the U.S. Holocaust Memorial Museum.

“This initiative aims to make Holocaust history relevant, engaging and personal for visitors, especially youth who are developing different expectations for their Museum visit compared to other generations,” said Michael Haley Goldman, the museum’s director of future projects, in a statement. “We’re exploring how to use this technology appropriately in a memorial and a museum such as ours that deal with a difficult history. We’re also interested in whether participants think this is a worthwhile addition to their visitor experience.”

The museum’s latest tech foray comes as museums around the country embrace virtual reality and AR experimentation. In 2015, The Smithsonian’s Museum of Natural History implemented Skin & Bones, a 3D augmented reality application that animates skeletons on display in the Bone Hall. Earlier this year, the Detroit Institute of Arts implemented 3D animation software that allows visitors to explore its artifact collections. The Tech Museum of Innovation in San Jose, California, used AR for its Body Worlds Decoded exhibit, and the Smithsonian just created a VR exhibit on the Art of Burning Man, for people to visit remotely.

Currently, Mt. Vernon and other U.S.-based museums and historic sites are looking at using ARt Glass, a headset-based augmented reality technology, which has been popular in Europe.