Travel startup Hopper has lifted the lid on version 3.0 of its smart airfare prediction app, as the company looks to broaden the use cases of its service to capture more travelers.

Founded out of Cambridge, Massachusetts in 2010, Hopper’s price-prediction algorithm serves to answer one question: Should I buy my flight now, or should I wait? Available on Android and iOS, Hopper tracks the prices on millions of flights every day and uses this arsenal of historical data to predict the optimal time to book a flight, given that flight prices can go both up and down. A user simply inputs their intended travel dates and receives regular alerts on whether the price is likely to rise or fall.

Now, Hopper is taking things to the next level. Through analyzing the patterns garnered from its data, the company realized that more than half of its 6 million users set up multiple alerts for the exact same destination but for different dates. The data also showed that some users set up several trackers for different destinations, but for the same dates. The main takeaway from these observations was that many travelers are flexible with dates or destination, which is why Hopper has now introduced a notification feed that serves up a personalized stream of recommendations based on the two billion flight prices Hopper tracks each day, but filtered on a user’s searches and tracked flight history.

In addition to recommendations, the feed will also feature updates on breaking fare sales and exclusive deals from a user’s nearest airport, which will prove popular for those prone to impromptu holidays. 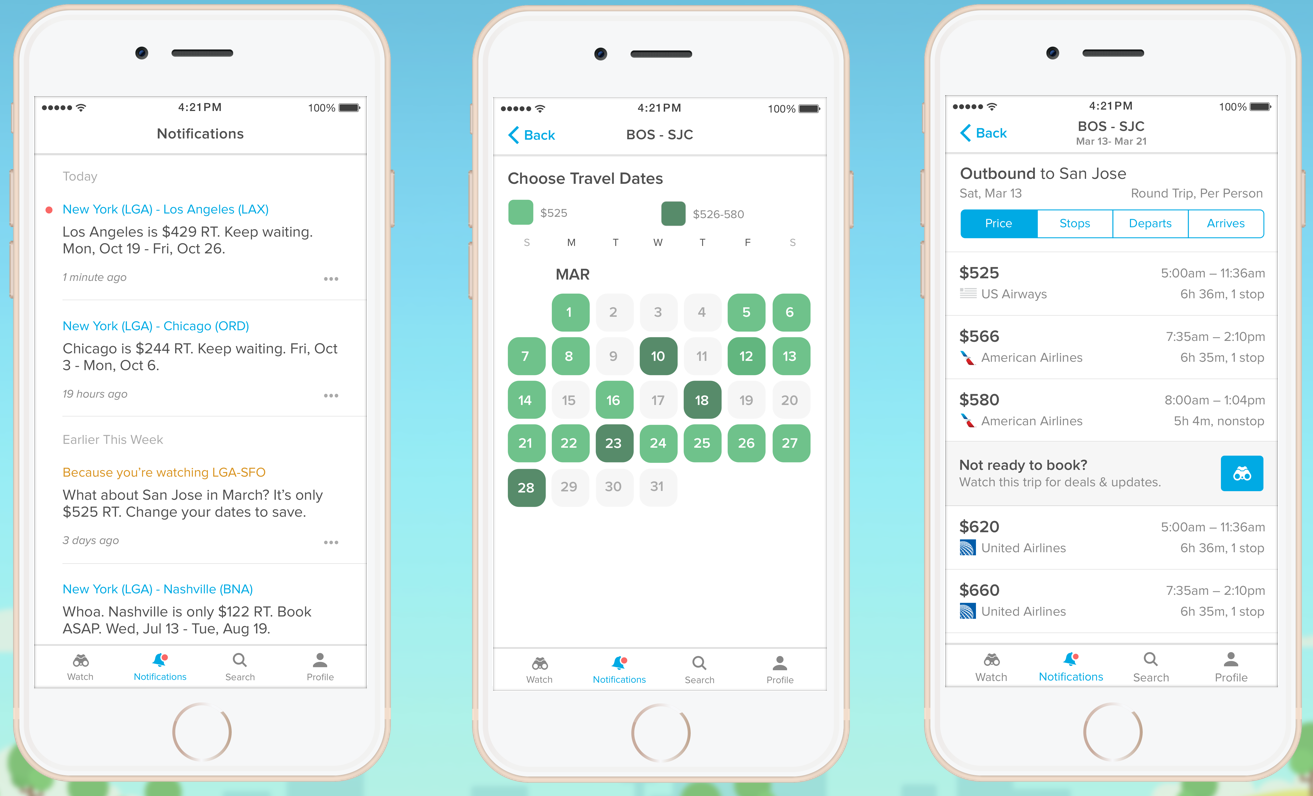 Hopper has raised almost $40 million in funding since its inception, including a $16 million round earlier this year. Though Hopper has been on the go since 2010, its early years were consumed archiving trillions of flight prices and building the backend smarts. It had offered web reports for some time based on the data it was gathering, and introduced an experimental app, but it wasn’t until early 2015 when the main Hopper app arrived for iOS, followed by Android several months later.

I’ve used Hopper to track flights in the past, and it is a genuinely great tool for ensuring you get the best price. Though it’s somewhat counterintuitive, buying a flight early isn’t always the best way to get the cheapest flight, as airlines often set fares at the conservative end of the spectrum but drop them if it sees demand isn’t being met. Hopper’s data suggests that as many as two-thirds of flights drop in price at some point.

My one minor complaint about Hopper so far has been that it doesn’t let users track nonstop flights only — many people are happy to pay a little more for a flight if it means not having to change planes at some random outpost at 3 a.m. A spokesperson has confirmed to VentureBeat that this feature will be coming in the next month, though, as the company introduces “watch filters” that lets users throw additional parameters into the mix, including removing low-cost airlines, long layovers, and indirect flights.