SAN JOSE, California — Here’s the thing about robots: They don’t need a break. They don’t get sick. They never steal. And they can work in the dark.

Today, said Melonee Wise, the CEO of Fetch Robotics, the state-of-the-art for inventory retrieval — especially in warehouses with large numbers of small products stacked up in narrow rows of shelves — is people. People are great, but they aren’t always that efficient, especially when it comes to tedious, repetitive tasks. Fetch plans on doing something about it.

That’s why the company has developed its first two products, the Fetch and the Freight, logistics robots designed to step into the modern warehouse environment and help businesses cut costs and save time as they compete for customers that, increasingly, want products shipped right now. Waiting is no longer an option. 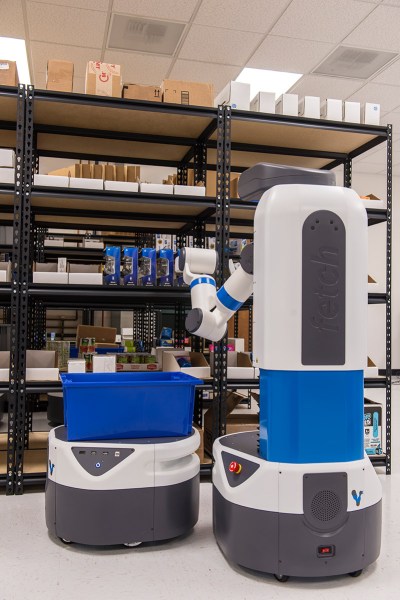 Above: The Fetch, working in tight conditions.

Earlier this month, I got a rare look at Fetch’s operations in what can best be termed the stereotypical nondescript office park in this teeming Silicon Valley city. Wise is not a founder, but a hired gun brought in due to her unparalleled talent and experience: She is a veteran of the pioneering robotics company Willow Garage and a founder of Unbounded Robotics, the makers of a (relatively) inexpensive all-purpose personal robot.

Now, though, Wise has taken on the challenge of upending the way robots are integrated into the logistics industry, chiefly by developing robots designed to quickly and efficiently pull products off tightly packed shelves with an arm-and-gripper system that can rotate 360 degrees (the Fetch) and then autonomously carry them to wherever they need to go (the Freight).

Fetch, which has raised $3 million in funding from O’Reilly AlphaTech Ventures and Shasta Ventures, is a typical Valley startup. Walk around its offices and you wander through areas called the “Robot Corral” and past half-built sheet-metal robot frames that, in their early stages, hardly resemble their future complete selves. In the weeks prior to launch, the offices have quite a number of brand-new, as-yet unused workstations, and there’s a slightly unsettling quiet throughout the place.

Touring me around, Wise explained that the company — 15 people as of early April — is in the process of making 40 initial robots, 20 each of the Fetch and the Freight. One of the company’s clever efficiencies is that though each product plays a different role, each uses the same mechanical base, allowing Fetch to save money with efficiencies of scale. 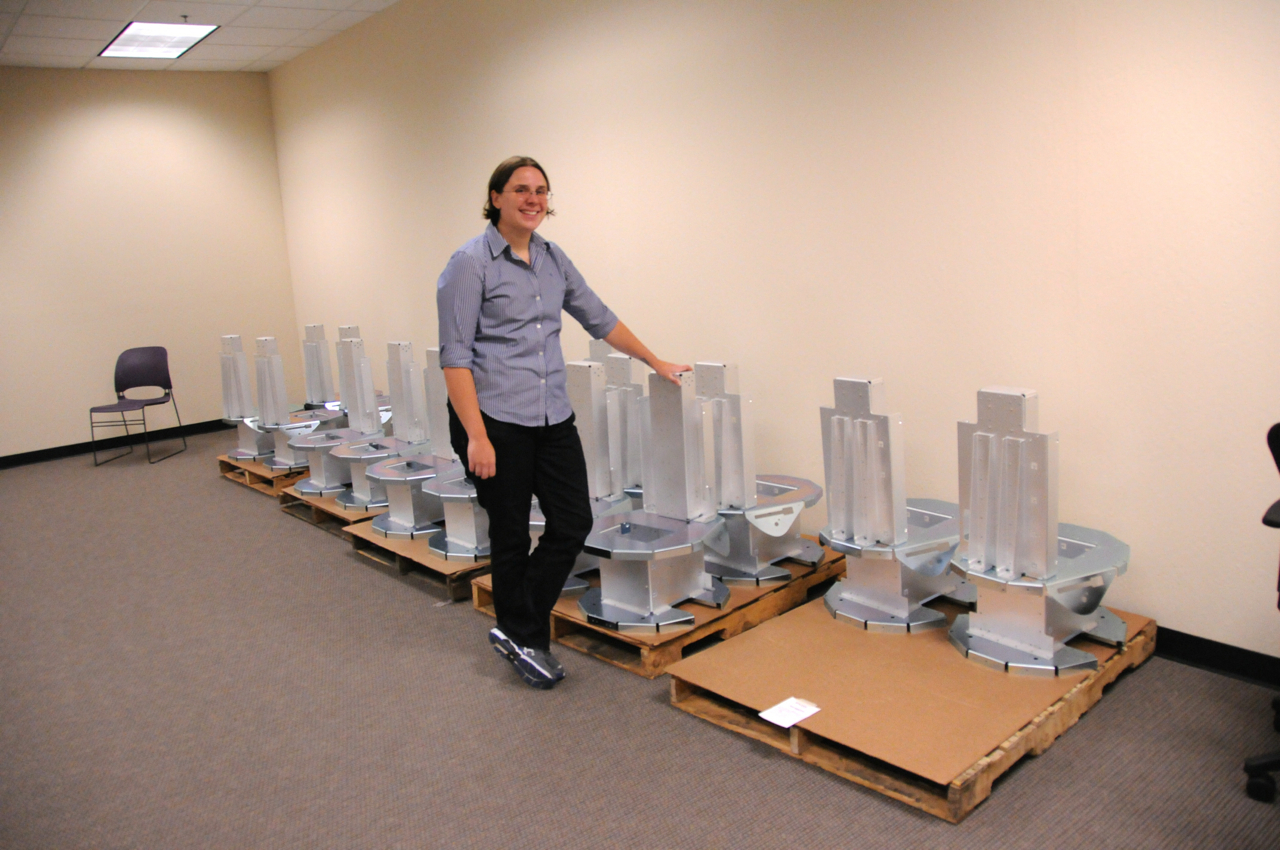 Above: Fetch Robotics CEO Melonee Wise, standing in front of a group of sheet-metal robot bases.

The Fetch has a telescoping spine and can be as short as 3.6 feet high or as tall as 4.9 feet. It can lift up to 13.2 pounds, it has a 3D depth sensor, and its arm boasts seven degrees of freedom. Owners can swap out their own grippers, depending on their needs. Wise says that’s a potential big win for the company: “Everyone’s got their own approach to gripping,” she said, “and we want them all to put their grippers on our robot.”

The Freight can carry 150 pounds and has a 2D laser scanner that can see up to 25 feet.

Both run on the Robot Operating System, the open-source platform developed originally by Willow Garage that now forms the basis for countless robotics projects throughout academia and industry.

Fetch is able to run its operations with a fairly lean staff, at least in the early going, because a couple of people can build a Fetch in a couple of days and a Freight in just a couple hours. That’s despite the fact that the former has about 500 unique parts that must be meticulously assembled.

Heading into a dark row of shelves, Wise demonstrates why a robot like the Fetch could be a game-changer for logistics companies. She shows that when reaching for an item, a human’s arm can only do a half-sphere’s range of motion. But the Fetch can do a full-sphere, meaning it can pick a small package out of a very tight space, and in just seconds. And it can repeat the motion again and again and again, and not get tired. “You can’t rotate your wrist backwards,” Wise said, “but our robot can.” 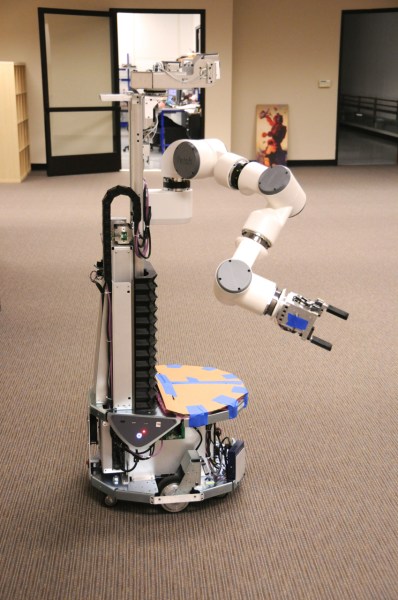 Above: A not-quite-finished Fetch, at the company’s San Jose, California headquarters.

It’s hard to precisely predict the return on investment of a Fetch or Freight — especially since the company isn’t yet saying how much the robots will cost. But Wise points out that they can save companies money because robot workers mean no theft, no restroom breaks, no worker’s comp claims, and no sick days.

Even better, she said that the Fetch can take pictures of the products it pulls off the shelf, allowing companies to produce photograph evidence disputing frequent complaints about items having been damaged before they were shipped. Plus, Wise said, “We think [the robots] can be as fast as a person, but work longer.”

Too, the robots are meant to be super low-maintenance. Wise said they can do six man-years of work before needing any kind of repair.

It’s not to say, of course, that the robots are infallible. Wise notes that they are notoriously bad at identifying and successfully grabbing products that are “blobs” — in other words, those that don’t have square or rectangular sides — or that are “cute, furry, or squishy.”

That’s a computer vision problem, she explained. Over time, she predicted, companies will standardize on packaging that the robots can pick up, which could solve the problem.

Another problem, one which the company solved in its software, is the speed of the Fetch’s arm, which is artificially limited. “We don’t want people to get injured,” she said, “because people are careless when they work around robots.”