On its website today, HTC unveiled the HTC 10. This is the phone HTC hopes will take on Samsung’s Galaxy S7, LG’s G5, and Apple’s iPhone 7.

HTC’s latest attempt to save its smartphone business is a flagship with the tagline “Power of 10” which, apparently, symbolizes “greatness and independence but also that the whole is greater than the sum of its parts.” In other words, the company claims — just as every other smartphone manufacturer tries to — that the latest flagship offers more than just a new metal design, better camera, and improved performance.

And yet, those are indeed the highlights that HTC insists will save it.

HTC’s press release, leaked to us ahead of the official announcement, uses nonsense marketing-speak like “inspired by light and sculpted to perfection” when describing the new design. But in short, you can expect a full glass front that merges with the metal body.

The company also notes that the HTC 10 was subjected to over 168 hours of extreme temperature tests, ranging from -20°C (-4°F) to 60°C (140°F), plus over 10,000 drop, bend, scratch, and corrosion tests. Is this finally a phone that absolutely doesn’t need a case? Probably not, but one can sure dream.

Next up, the camera features “the world’s first optically stabilized, larger aperture f/1.8 lenses” on both the front and rear cameras, larger sensors, 12 million UltraPixels (1.55um per pixel), laser autofocus on the back, plus a wide-angle lens and screen flash on the front. The HTC 10’s camera is also designed to launch “in as little as 0.6 seconds.” RAW format support is also a go.

HTC also claims that the 10 features “the world’s first stereo 24-bit Hi-Res audio recording, capturing 256 times more detail than standard recordings, across twice the frequency range.” The phone includes a headphone amp that delivers “two times the power of a conventional headphone amp,” the ability to upscale from 16-bit to 24-bit audio, and digital to analog conversion. You can even create your personal audio tuned to your individual hearing. The BoomSound Hi-Fi speakers feature a separated tweeter and woofer design, and a dedicated amplifier for each.

And finally, performance. HTC says the 10’s quad HD display is 30 percent more colorful and 50 percent more responsive to touch than its predecessor. The company says its fingerprint scanner unlocks in 0.2 seconds and is algorithmically designed to recognize you faster over time. It also claims that its battery can be charged to 50 percent in just 30 minutes. 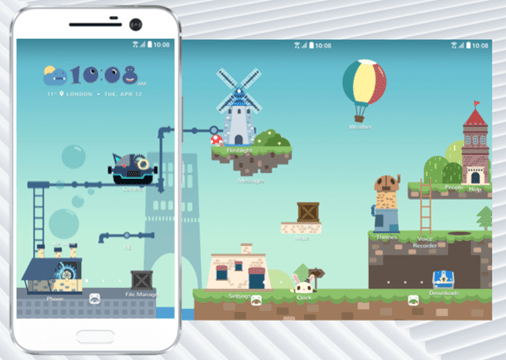 Last, but not least, HTC has created a new Freestyle Layout, which essentially means you don’t have to organize your apps in a grid anymore. You can place icons, stickers, and widgets anywhere you like, organize by layers and groups, link stickers to apps, or even get rid of icons altogether.

The HTC 10 will ship in four colors: Carbon Grey, Glacier Silver, Topaz Gold, and Camellia Red, and they’ll come in two versions with different Qualcomm Snapdragon processors depending on the market — in the U.S., it’ll come with Snapdragon 820.

Though the HTC 10 will be available across multiple carriers, including T-Mobile, Sprint, and Verizon, HTC will also offer the device unlocked through HTC.com. It can be preordered today for $700, though it won’t ship until early May.