Nobody really knows why Google gets involved in phone-making. It could be a vanity project, as the Verge’s Vlad Savov asserts. It could be the old idea that Google wants to show the OEMs how to make the ideal Android phone (actually it pisses OEMs off). It could have something to do with creating phones to sell along with Google’s new Project Fi mobile service. 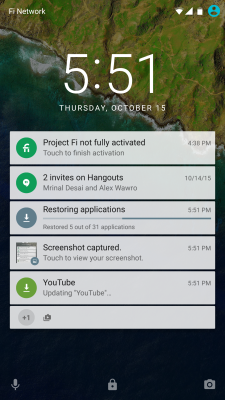 Above: Notifications on the Nexus 6P lock screen.

One of the newest set of Nexus phones, the Nexus 6P, is a premium model starting at $499, so Google may even be trying to apply price pressure to expensive devices like the iPhone 6s Plus, which starts at $750.

The 6P phone, a design collaboration between Google and the Chinese OEM Huawei, is the successor to the 5.96-inch Nexus 6 Motorola released last year.

The other new Nexus, however — the $379 LG Nexus 5X — does fit neatly into the $400-or-less price range that’s become the standard for new Android phones (many phone makers are coming around to the belief that competing with Apple in the premium price ranges is a losing proposition).

I’ve been testing the Nexus 6P, measuring it at every step against the iPhone 6s I normally use. Let’s start with the stuff you notice right away about the new 6P.

It’s a big black slab of glass sitting on a bed of aluminum. I like the fact that the display appears to take up far more of the front of the phone than in other handsets I’ve seen this year. The bezel space is pretty minimal, especially at either side of the 5.7-inch display.

There is, however, a lot of room at the top and bottom of the phone for the microphone and speaker grills and the front camera sensors — too much room in my opinion. The phone didn’t need to be quite as looooong as it is. But reducing that space might make for less battery space, which we’ll discuss in a minute.

If you look down the side of the phone you see a narrow strip of muted black metal with glassy machined edges on both sides. One of the edges curves up to meet the line where the glass is inlaid on the front of the phone. The other meets the metal surface of the back of the phone, which is the same color and texture as the sides of the phone. 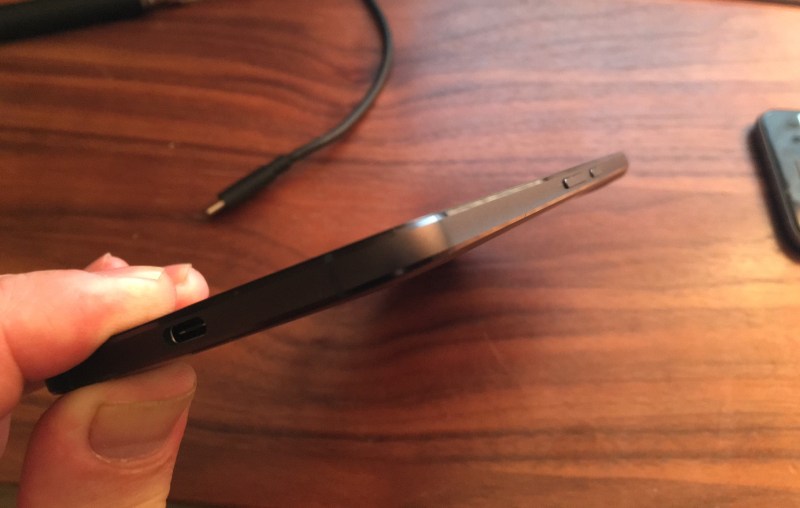 The designers made a nice decision on the role of the plastic inlays at the top and bottom of the black version of the phone. These thin lines, which are very obvious on the iPhone 6s and other phones, are there to interrupt the metal in various places so that it doesn’t interfere with the wireless signal being sent and received by the antennas. Huawei sought to hide these lines, and did so with great success, at least on the black version of the phone. You have to look closely to see them, and thanks to that, the phone has a far more cohesive, understated design effect.

The 6P’s design isn’t perfect. The large oval outlay at the top of the back of the phone seems like a design error. This area protrudes slightly from the surface of the back and completely interrupts the “black slab” aesthetic of the rest of the phone. The oval area contains the camera lens and flash, which peek out at surface level from other phones. 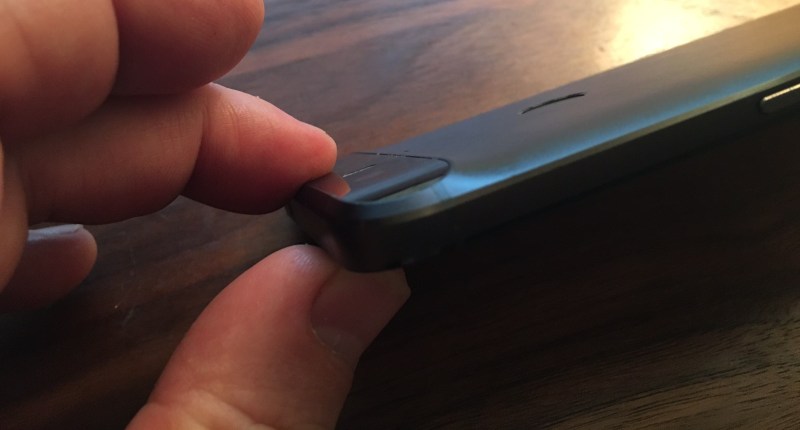 Above: The oval area designed to hold the camera protrudes from the back surface of the phone.

However, it’s likely that Huawei needed the increased thickness to house a larger camera assembly. Creating a whole new design element may have been its way of doing it, which is understandable, but it creates an unpleasant effect.

Side note: I keep writing this and nobody listens. The back of this phone, like so many others, is too damn slippery. Especially combined with the light weight of the phone, it’s just too easy to drop. That makes the phone a good candidate for a case, which, for the user, makes all the design niceties null and void.

The fingerprint sensor is on the back of the phone, which works swimmingly with the natural movement of my hand. Ergonomically it works better for me than the front sensor on my iPhone. 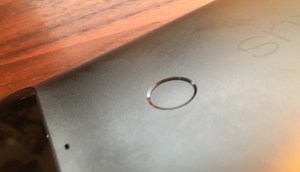 Above: The fingerprint sensor on the back of the Nexus 6P.

The sensor is fast, and can be very easily set up to recognize the print of your sensor finger on both hands. You use this sensor for authenticate yourself to the phone, and to authenticate mobile payments. Design-wise, the sensor is set in from the surface of the phone, and is rounded by an edge which has been machined to a shine in the same way as the edges of the side of the phone. 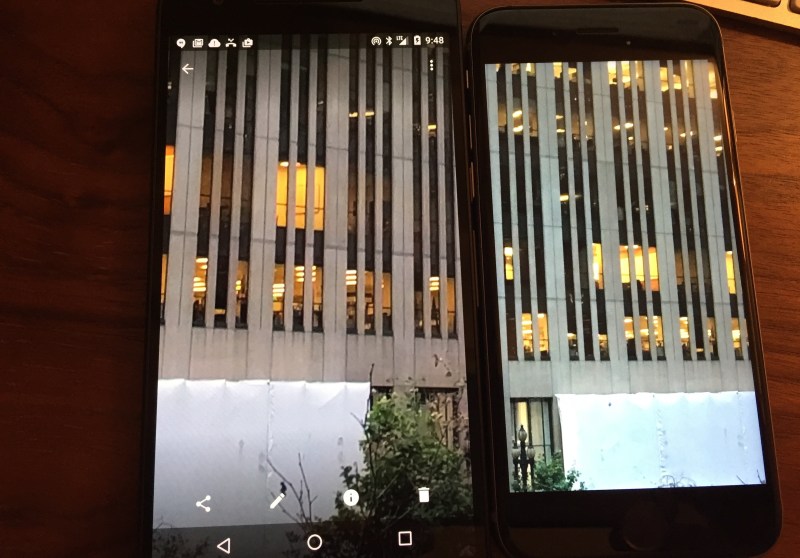 Above: Comparing resolution of zoomed photos from the Nexus 6P on the left, and the iPhone 6s on the right.

But the accuracy of the stills and video I shot with the 6P’s camera couldn’t stand up to that produced by the iPhone 6s’s camera. The 6P’s photos looked pleasing when viewed by themselves; the camera is almost certainly good enough for most people’s needs. But the iPhone’s videos and images seemed clearer and punchier, and covered a wider light to dark range.

I played the same high-definition music video on the displays of the Nexus 6P and the iPhone 6s (with the brightness levels turned all the way up), and some familiar themes came up. The 6P’s version of the Taylor Swift video was visually pleasing and had a “softened” effect, but the video lacked the dynamism and clarity it had when displayed on the iPhone 6s display. 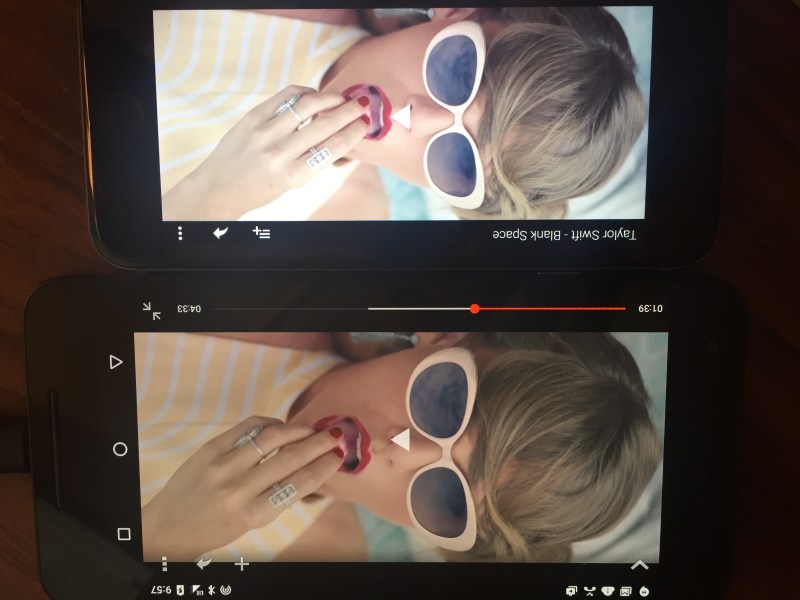 Above: Watching the same video on the iPhone 6s (top) and the Nexus 6P (bottom).

The 6P, after all, is meant to showcase Google’s Android 6.0 (Marshmallow) operating system, which is governed by Google’s beautiful Material Design protocol, and it does so very well. The new OS brought new usability and design features, as well as mobile payments support, native fingerprint reader support, and a new power saver mode called “Doze.”

I was impressed with the 6P’s battery life. The phone was fully charged at noon on Friday, and while I watched very little video and played games for only 15 minutes or so over the weekend, the thing didn’t completely out of gas until about 8:30 on Sunday night. I have no doubt that the battery would sustain well over a day of heavy usage. 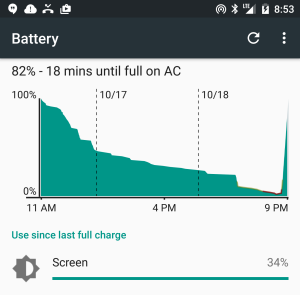 Above: The Nexus 6P lasted through the weekend (almost) on a single charge.

Using the USB-C cable plugged into the AC adapter, the phone reached full charge in just over 100 minutes. So Google’s claim that the phone can charge in 97 minutes seems legit. The phone needed only about an hour to reach 80 percent charge, and the last 10 percent of charge seemed to take a relatively long time.

Earlier Nexus phones supported the Qi wireless charging standard, but not the 6P. Google says that the added charging speed brought by USB-C made them feel better about 86-ing the wireless charging to make the phone a bit smaller. I’m not sure I agree with that choice. USB-C or not, cables are cables, and they’re a hassle.

The iPhone 6s is a better phone than the Nexus 6P. It’s created by more talented designers and engineers who are without equal in hardware and software integration. That’s why the iPhone 6s shoots better photos and video with its 12-megapixel sensor than phones with 20-megapixel sensors, for example.

But . . . I walked out of the Apple Store the other day with the sinking feeling of having just dropped $815 for the iPhone 6s. Pain like that can make you philosophical: It made me reexamine the role these powerful little devices play in our lives — it may be too big for our own good.

So if I can get a phone like the Nexus 6P — with equal or better specs — for $300 less, well, I’m going to think very seriously about that. It’s becoming more and more apparent that consumers can get more tech for their money on the Android side of the fence, and the Nexus 6P is a case in point.