If you’re an executive seeking peak performance from the moment you wake up or a parent hoping to create a better nightly routine for your family, you’ve probably heard about sleep tracking wearables — devices that promise to improve your health and productivity by monitoring your sleep. Sleep tracking tech is rapidly becoming ubiquitous: This month, Apple added the feature to tens of millions of Apple Watches in a free watchOS 7 software update, and Fossil did so for select Google Wear OS watches in August.

But despite years of work by researchers and wearable developers, meaningfully useful sleep tracking remains more a dream than a reality. After trying the feature in prerelease versions of watchOS 7, I spent the past week testing Apple’s finished sleep tracking app, which meant changing my daily charging routine, wearing my Watch to bed each night, and checking my phone for insights each day. Having gone through that process, I’m convinced I’ve experienced the kernel of a valuable solution, but just like the very first Apple Watch, it still feels half-baked.

For the time being, I can’t in good faith recommend wasting precious time on Apple’s current sleep tracking app, and I don’t have much confidence in rival solutions, either. Even with the latest and greatest Apple Watch, users can expect little in the way of actionable insights. This is coupled with the inconvenience of routine midday smartwatch recharging — a step beyond the prior “leave it on a nightstand dock” system people grudgingly began to accept years ago. My big takeaway is that most users will be better off waiting for more mature software and hardware before diving into sleep tracking.

Here are some of the things I discovered during my testing regimen.

Ever since the first Apple Watch arrived in 2015, Apple has stuck to the same battery life guarantee: 18 hours of run time between charges. The actual number can be much lower if you use the watch to make long phone calls, constantly download data, or track extended runs or workouts. But on the other hand, the latest Apple Watches quietly exceed the 18-hour promise if you disable or only lightly use their new features. Regardless, Apple’s guideline was simple: Put the watch on your wrist each morning, don’t worry about battery life all day, then place it on a charger each night, and repeat ad infinitum.

Given that the company has had five years to prepare for the addition of sleep tracking — which obviously requires users to wear their Watch overnight — Apple could have boosted battery life any year with a bigger housing or more power-efficient parts to enable multiday run times. Some competitors have made those choices, relying heavily on longer run times to differentiate their devices. Apple instead decided to market its way around design compromises, recently floating the idea that users should recharge their Watches during morning showers.

If the Watch has less than 30% battery life by bedtime, sleep tracking will be a problem, as it apparently uses a lot of juice. I wonder how much of an impact the feature will have on the life span of Apple Watch batteries. Sleep tracking alone could push the rechargeable cells to age faster than they have during the wearable’s first five years on the market, increasing the need for repairs or earlier replacements.

Since Apple successfully convinced tens of millions of people to deal with nightly smartwatch charging, notably starting at a time when watch wearing was on the decline, I’ll concede that it has a better chance of pushing at least some users to transition to midday charging, despite how insane that sounds right now. But from my perspective, the single worst thing about sleep tracking is that it interrupts my passive use and enjoyment of the Watch by asking me to take the device off and put it on a charger just to get sleep data at night. Between that daily hassle and the nature of the data, I don’t think sleep tracking is worth the annoyance.

Sleep data is modest and not particularly actionable

Apple’s sleep tracking app interface is simple. Tell it your preferred “bedtime” schedule — in my case, 11 p.m. to just before 6 a.m. — and it will be looking out for sleep during those times (midday naps won’t be counted). It turns out that you must set up tracking schedules to cover each individual day of the week or use separate schedules for weekdays and weekends. I didn’t realize until too late that the Watch hadn’t recorded data for two full nights because I hadn’t set up a separate weekend schedule to cover them. 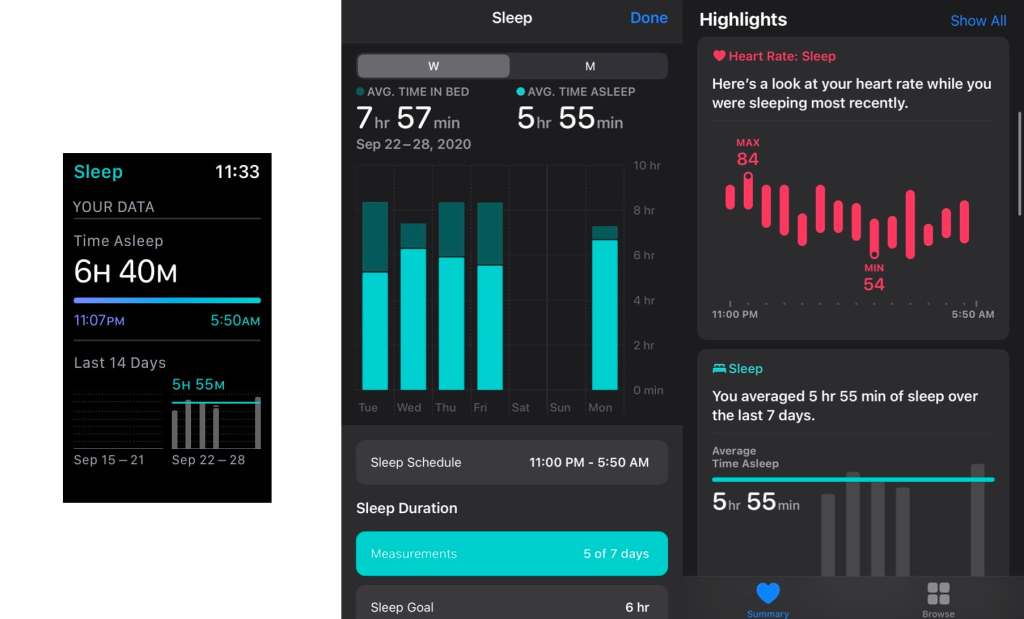 Assuming the Watch gathers your data properly, you’ll see a very modest display of data, including a bar representing your total “time asleep,” the timestamps indicating sleep start and end points, and a bar chart covering the last 14 days. If you want a deeper dive, you can open the Health app on an iPhone to see your “average time in bed” and “average time asleep” — and under some conditions, a correlation of your overnight heart rate data with your sleeping schedule. When I checked the Health app, one day the heart rate data was there, but another day it disappeared from the app’s list of Highlights and I couldn’t find it.

I was somewhat astonished by how little information the Watch presented after a night of sleep. The Health app shows an aqua-colored bar representing “time asleep” overlaid upon a darker blue bar representing “time in bed,” with gaps suggesting mid-sleep interruptions. That’s it. There’s nothing about deep or REM sleep and no easy way to see whether those interruption bars coincided with a rise in your heart rate or some other event.

Apple has suggested it’s providing little data to keep users from obsessing over their sleep schedules, as that might inadvertently generate even more anxiety or restlessness. I’m still not sure whether that’s truly an act of kindness or just a convenient excuse for underwhelming functionality.

Accuracy is a positive

The biggest positive I noted is a sense — developed over time and in consultation with others who have been testing the feature — that Apple’s sleep tracking data is mostly correct, even if there’s not much of it. My Watch appears to be properly extrapolating whether I’m “asleep” rather than just “in bed” based on sensor data, including some lack of movement, certain wrist positioning information, heartbeat scans, and perhaps external factors. The aqua bars and gaps lined up temporally with my nightly sleeping recollections, down to roughly the minute I fell asleep. Two friends and my kids have all had the same experience.

As a father, I’m already fretting when I see multiple brief interruptions in my kids’ sleep bars when they’re sleeping at another location. If this is the future of health tracking, I can imagine several reasons Apple — and clinicians, including privacy-concerned ones — might be concerned about presenting too much data, now and going forward. But in a health setting, users should have the ability to choose how much data they feel comfortable seeing, rather than being told that little or no data is being presented to shield them.

Apple’s Wind Down is better than its sleep tracking

Though I’m not thrilled with the sleep tracking functionality, Apple did a nice job with a related set of watchOS 7 and iOS 14 features called Wind Down. Rather than just telling you how much you slept, Wind Down provides a holistic approach to weaning you off your phone at night, softly encouraging you to settle down before a full Do Not Disturb regime kicks in.

If you prefer to use apps to relax, you can create iOS shortcuts specific to settling down, such as turning on a music playlist or podcast, opening an app for reading or journaling, or accessing apps for yoga and meditation. These shortcuts will appear on the iPhone’s Lock Screen so you’re reminded to use them, and you can also initiate a watchOS Wind Down sleep mode that begins however many minutes you prefer before your scheduled bedtime.

These kinds of features may seem simple to implement, but they’re actually thoughtful, OS-level integrations that show how sleep tracking functionality could become part of a larger sleep management experience for some users. I might want to keep using Wind Down even in the absence of sleep tracking.

Sleep tracking has been on smartwatch users’ wish lists for a long time, so I would love to be able to tell you that Apple nailed it with the feature in watchOS 7. Unfortunately, that’s not the case. I would be surprised if most people find Apple’s presented information actionable — for me, there just wasn’t enough value in the data to justify the hassle of midday charging. Having tested sleep tracking for a week, I’m looking forward to disabling it and going back to my regular routine tonight.

That said, my gut feeling is that we’re looking at what Apple considers version 1.0 of the feature and that it has serious potential to improve in subsequent software and hardware releases. Adding more actionable, cross-referenced data (similar to the heart rate Highlights) might help users diagnose what’s waking them up at night. This could happen with more robust overnight data collection, such as the ambient noise measurements the Watch can already take, or potentially by synchronizing bedmates’ data, assuming Apple’s ever-stiffening privacy concerns don’t stifle such concepts.

If the Watch is going to be using as much energy as it does at night, it should be gathering a lot of data and making the most of it. Extending Watch battery life with a bigger battery would be another alternative, making the feature more acceptable as-is.

If you already have an Apple Watch or have considered buying one for sleep tracking, my advice would be to set your expectations for this feature low. But don’t be afraid to test its value for yourself, as you may get something out of the limited information Apple is currently willing to offer.