Smartphone vendors shipped a total of 343.3 million smartphones worldwide last quarter. This figure is up just 0.3 percent from the 342.4 million units in Q2 2015. Sound familiar? Yeah, that’s because the previous quarter growth was just 0.2 percent. This isn’t just a one-off anymore: Smartphones have hit a plateau.

And also like the previous quarter, Samsung continues to dominate. In Q2 2016, the South Korean company shipped more smartphones than any other vendor, and once again out-shipped the next two smartphone makers — Apple and Huawei — combined. The latest quarterly figures come from IDC, which summarized its findings in the following chart: 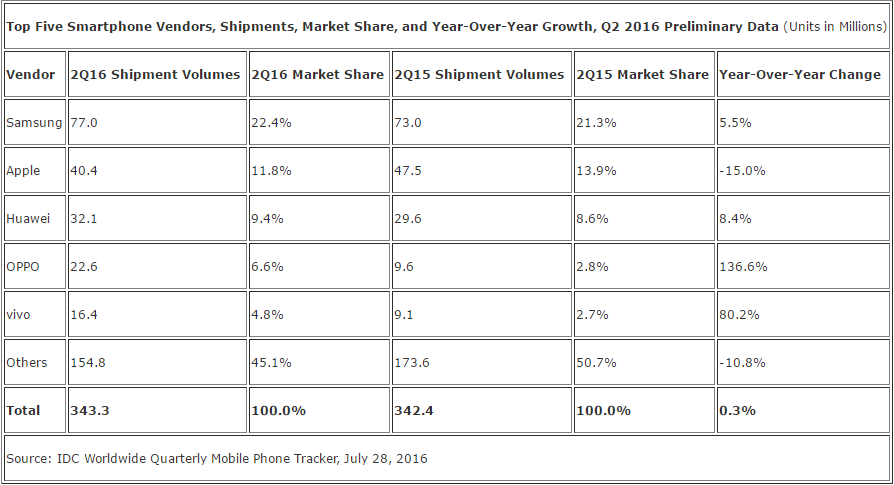 As you can see above, Samsung’s market share increased 1.1 percentage points (from 21.3 percent to 22.4 percent), and it shipped 4 million more smartphones (77.0 million). Every quarter, Samsung owns about a fifth of the market, though sometimes its share is closer to one-quarter. IDC believes the success of the Galaxy S7 and Galaxy S7 Edge was a big contributor, arguing that removable storage, waterproofing, and a faster processor “proved to be the winning combination.” Samsung’s more affordable J Series also performed well in both developed and emerging markets, thanks to refreshed models (J7, J5, J3).

Apple fell 2.1 points (to 11.8 percent), the second year-over-year decline for the company’s smartphone sales. Not only did the iPhone 6s and iPhone 6s Plus fail to deliver as well as their predecessors, the cheaper iPhone SE couldn’t pick up the slack. Now it’s all up to the iPhone 7.

Huawei, meanwhile, grabbed 0.8 points (to 9.4 percent), Oppo jumped 3.8 points (to 6.6 percent), and Vivo gained 2.1 points (to 4.8 percent). While the Android and iOS duopoly doesn’t look like it’s going away anytime soon, the Samsung-Apple duopoly is continuing to erode.

It appears that lesser-known Chinese brands Oppo and Vivo, which pushed out previous fourth and fifth place players Lenovo and Xiaomi, are here to stay. As China’s smartphone market matures, competition will continue to be fierce. And as these players look to the worldwide stage, cheap devices will get even more attractive.

“Outside of Samsung’s Galaxy S7 flagship, a majority of vendors, including Apple, have found success with more affordable models compared to their flagship handsets,” Anthony Scarsella, research manager with IDC’s mobile phone team, said in a statement. “As smartphone prices continue to drop and competition escalates at the high-end, vendors will need to continue to push ‘flagship-type’ devices at affordable price points to encourage upgrading on a more frequent basis. Chinese brands such as Huawei, OPPO, Vivo, and Xiaomi have witnessed success with this strategy by shipping premium styled devices that focus on the features that matter most to consumers, such as imaging, sound quality, and design.”