The tablet market has now been in decline for seven quarters in a row. Q2 2016 saw a 12.3 percent year-over-year decline: 38.7 million units shipped worldwide, compared to 44.1 million units in the same quarter last year, according to market research firm IDC. The numbers include both slate and detachable form factors, meaning tablets with keyboards are counted.

Android dominated with 65 percent share, followed by iOS, which captured 26 percent. That left just 9 percent for Windows devices shipped during the quarter, though IDC pointed to “early signs of change, as the Android vendor list has contracted, and champions of the OS have begun to offer Windows-based products, hedging against the decline of Android slates.”

The top two tablet makers maintained their positions: Apple was first and Samsung second. The top five vendors accounted for 57.6 percent of the market, up from 51.8 percent last year: 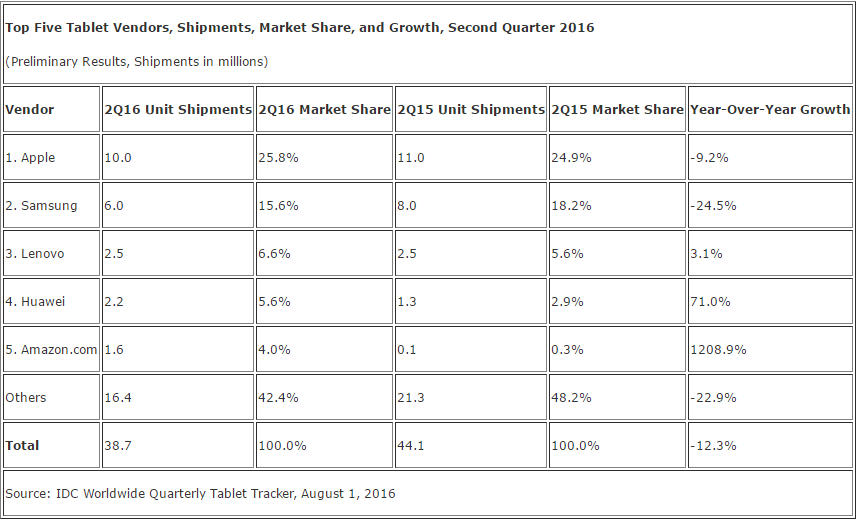 Both Apple and Samsung saw their shipment numbers fall once again. Apple actually managed to gain share though, up 0.9 points to 25.8 percent market share, which means it still grabbed a quarter of all tablets this past quarter. Samsung slipped 2.6 points to 15.6 percent, and also shipped fewer units.

Because of the larger drop for Samsung, the gap between the South Korean company and the U.S. company increased. This is a new trend for 2016, as in the previous year the gap had been shrinking. The slight reversal can likely be attributed to Apple’s iPad Pro lineup, though Apple is still selling fewer and fewer iPads overall.

This is the second time that Amazon has placed in the top five in a non-Q4 quarter — typically, the company only shows up due to the holiday season. It appears the company’s low-cost Fire tablet has made it, though the growth shown is skewed by the fact that IDC did not include the 6-inch tablets offered by Amazon in Q2 2015.

Microsoft is still missing from the list. IDC hinted last quarter that the company could show up in the top five, thanks to its Surface line, though no promises were made. But the real battle will be between Android and Windows.

“The market has spoken, as consumers and enterprises seek more productive form factors and operating systems — it’s the reason we’re seeing continued growth in detachables,” IDC senior research analyst Jitesh Ubrani said in a statement. “At present, it’s difficult for Android to compete with iOS or Windows detachable products. However, the next 12 to 18 months will be very interesting, as Google launches the next version of Android with better multi-tasking support and as they begin to bring together their two operating systems.”