According to RetailMeNot, one in four U.S. consumers has at least one restaurant app on their phone, for various reasons — whether it be to gain loyalty points, order ahead, use digital coupons, or make mobile payments.

But according to new research released today by ARC from Applause — which takes in data from nearly one million app store reviews across the Apple App Store and Google Play — it would appear that very few of these apps are winning the customer experience battle.

In fact, the average mobile user sentiment score across the 100 most successful restaurant apps is a paltry 38/100. Or a poultry 38/100, if you’re using the KFC app.

The report explains that customers now expect rich, location-based, transaction-aware apps that offer great experiences and real benefits. The data shows clearly that restaurants are not in step with those expectations. In fact, 45 out of the top 100 restaurant brands lack a native app.

Some are doing it right. And in looking through the data and the resulting study, it is clear the apps that do best are those which have the highest levels of engagement: Domino’s ‘pizza tracker’ is a good example, and Starbucks’ app not only rewards its customers for repeat purchases, it offers mobile payments, a feature that brewed up $1.9 billion in revenue in Q1 2016.

So what can the worst-performing apps do to challenge the best — those few who are getting it right?

“First and foremost, the brands that don’t have any apps simply need to get in the game — and soon,” Ben Gray, digital experience analyst at Applause, told me. “Consumers want to interact with restaurants via apps to find the nearest location and order food ahead. Many go elsewhere when they can’t, out of convenience and efficiency.”

And restaurants that do have native apps aren’t understanding what their customers want or how streamlining the experience improves their chance of creating a repeat customer.

Domino’s tops the charts with a sentiment score of 85.3, taken from around 311,000 reviews. Next come Jimmy John’s, Panera Bread, Starbucks, and Five Guys. At the bottom of the table, you’ll find fast food behemoths such as McDonalds, Burger King, and Wendy’s, as well as the likes of Krispy Kreme, Dunkin’ Donuts, and 7-Eleven. All of these brands gained sentiment scores of less than 33. Why so low?

Often, these apps are not optimized for frequent micro engagements and require multi-input navigation. Or they lack the features customers expect, such as order ahead options, loyalty programs, and discounts. Other big factors for below-average app include bugs, instabilities, and lack of speed — issues that customers encounter with regularity.

There is clearly a lot of room for improvement. So what does the future of mobile engagement look like in this sector, and what can we expect to see happen next? 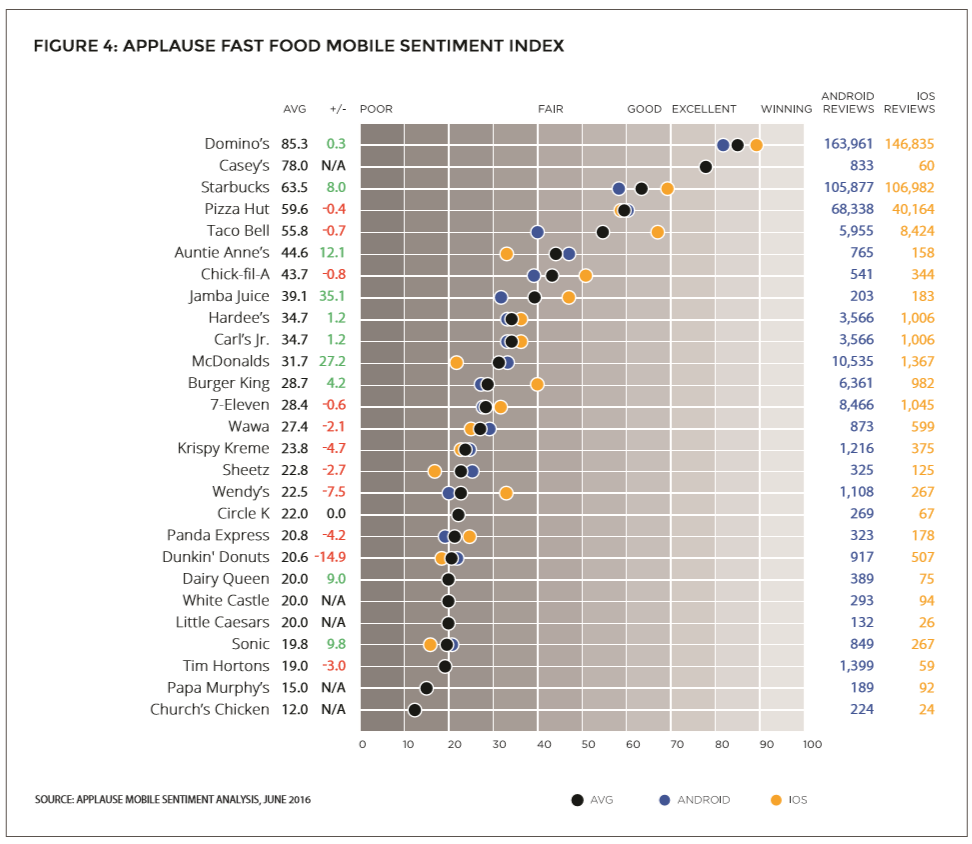 “Consumers are looking for more reason to engage with restaurant brands through their apps,” Gray said. “Restaurants will deliver in the form of digital coupons, loyalty programs that offer discounts, and rewards with increased spend, plus marketing campaigns to drive awareness. Most restaurant chains are chasing leaders like Starbucks, Domino’s, Taco Bell, and more. The industry is grappling with game-changing features like order ahead, mobile payments, and location-based services. Scaling these U.S.-based digital experiences to international territories — while catering to local traditions and customs — is the next frontier for the globally recognizable brands.”

Starbucks remains an interesting case. You could argue that the Starbucks app is the most successful mobile payment solution on the market, but the likes of Apple Pay, Android Pay, and Samsung Pay are knocking on the door. Interestingly, those payment solutions also allow the consumer to hold loyalty cards, creating digital versions of the ubiquitous plastic slivers that build, over time, into an unwieldy mass. Will these payment apps threaten the native restaurant app?

“Starbucks holds more cash in their cards and apps than most banks,” Gray said. “Sure, not everyone can or will become a Starbucks. But most merchants will benefit with Apple and Google taking the lead on mobile payments by integrating their systems with Apple and Android Pay, instead of building their own transaction systems. App fatigue also plays a role. Do I need a different app to pay at every merchant I go to? That’s not how my normal debit card works. My normal debit … just works. Everywhere. The payment solutions and other mobile wallet integrations are manifestations of that concept.”

The full study by ARC from Applause is available today.