Intel confirmed its $16.7 billion acquisition of Altera on Monday in the company’s biggest expansion within the chip business in years.

The world’s biggest chip maker hasn’t made a big acquisition in some time, but the deal shows that the semiconductor industry is going through a wave of consolidation. That wave is going to remake Silicon Valley and the $335 billion chip industry.

Intel is expected to pay about $54 a share to Altera stockholders. The deal has been on again and off again since the Wall Street Journal reported talks back in March. The new price is about 56 percent higher than the one at which Altera traded before the first report of the talks on March 27. On Friday, Altera’s shares closed at $48.85.

While Intel makes processors and memory for PCs, servers, and mobile devices, Altera concentrates on field programmable gate arrays (FPGAs). Those chips can be programmed for different functions at the last minute, but that flexibility makes them more expensive. More customers have been using those chips within servers to improve overall system performance, and that may be why Intel sees them as strategic to its future.

“Intel’s bid for Altera is a strategic maneuver to consolidate, a strategy that is becoming more common within the semiconductor sector as companies search for new sources of revenue growth and target chip makers struggling to increase their profitability on their own,” said Ken Odeluga, a senior market analyst at trading firm City Index. “The companies are already partners and Intel will look to use its new acquisition’s line of programmable chips to get revenue growth amid a slow down in personal computer demand that is dampening its own growth. This deal has come as know surprise and the semi conductor sector is likely to an increase of such activity going forward.” 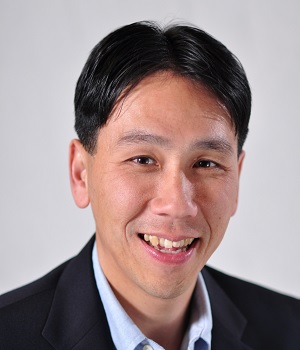 Above: Mark Hung of Gartner.

Meanwhile, Mark Hung, analsyt at Gartner, said in an interview, “I think this deal was both for offensive and defensive purposes.”

On top of that, he said the move positions Intel to create multi-chip packages with both processors and FPGAs. This could help Intel further differentiate its server offering compared to competitors.

Intel can use Altera to fill its chip factories and help finance the construction of more of them, he said.

As for why there are so many chip industry deals, he said, “It’s cheap money.” Chips cost $100 million to $200 million to design from scratch these days, and only the big companies with financial power can do it, he said. And since interest rates are still low, companies can get access to relatively inexpensive capital, particularly from private equity companies.