Intel now has a thousand people or more working to outfit a 2016 iPhone with its lauded 7360 LTE modem chip, sources say. If all goes well, Intel may end up providing both the modem and the fabrication for a new Apple system on a chip.

Sources close to the matter say Intel is pulling out the stops to supply the modems for at least some of the iPhones Apple manufactures in 2016. This phone will likely be the iPhone 7. VentureBeat was the first to report on the two companies’ work together, and more pieces are falling into place as the project progresses and grows.

Apple may dual-source the LTE modems in its new iPhones from both Intel and Qualcomm. Today, Qualcomm’s 9X45 LTE chip is baked into all iPhone modems. 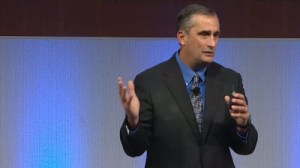 Intel CEO Brian Krzanich said during a recent earnings call that Intel’s 7360 modem will start shipping by the end of the year, and that new products using the chips will begin showing up next year.

Our sources don’t believe Apple has officially signed Intel as a supplier of the modem chip, but a deal will happen if Intel continues to hit its project milestones.

Intel failed to seize on the mobile chip market early on, and has been running far behind rival Qualcomm ever since. “This is a must-win for Intel,” one source told VentureBeat.

Another reason for the large number of people on the project is that it could be just the beginning of a much deeper Intel involvement in the iPhone.

A new SOC fabbed by Intel

Sources with knowledge of the situation say that Apple eventually would like to create a system-on-a-chip (SOC) that includes both the phone’s Ax processor and the LTE modem chip. A system-on-a-chip design could deliver significant returns in improved speed and better power management.

Apple would design the SOC, which would carry an Apple brand name, and would license the LTE modem intellectual property from Intel for the SOC, one source said.

This would be a sensible arrangement, in light of the fact that Intel hasn’t excelled at SOC design in the past, and because Apple does vertical integration very well. Apple’s skill in this was most recently seen in the integration of its M9 graphics chip with its powerful A9 chip for the iPhone 6s. 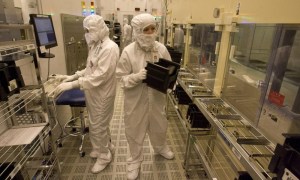 While the SOC would be created from top to bottom by Apple’s formidable chip designers, Intel would get the job of fabricating the SOC using its 14-nanometer process.

Samsung and TSMC, which currently share the fabrication of the iPhone’s A9 chip, also have 14-nanometer processes, but those foundries are said to compromise by making the interfaces with a 20-nanometer process.

Intel’s foundry, by contrast, uses a 14-nanometer process “from front to back,” as our source said. Intel’s process, our sources said, can create silicon chips with superior density and gate pitch.

Intel’s 7360 LTE chip was created at an Intel facility in Munich, Germany. The facility once housed the modem maker Infineon, which Intel acquired in 2011. Infineon supplied the 3G modems in the iPhone up until 2011, but lost the deal when it sold out to Intel.

One of our sources said Apple engineers have been making trips to Munich, Germany, to work with Intel engineers to optimize the 7360 chip for Apple’s phone. One of the trips was planned to coincide with the Oktoberfest event in Munich, which ran from September 19 through October 4.

Apple has also been hiring some key wireless engineers from the team that developed the Intel LTE chip in Munich. 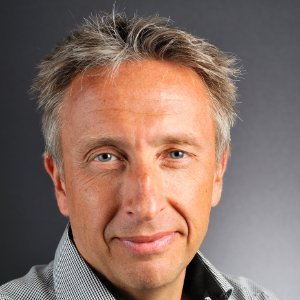 Above: Ex-Infineon CTO Bernd Adler went to work for Apple in August.

One of them is Bernd Adler, who led the RF engineering group at Infineon until the sale of the company to Intel in 2011. He was Intel’s mobile chief technology officer before he went over to Apple in August.

Another engineer, Carsten Janus Pedersen, was senior specialist of system software at Intel in 2014 before he left for Apple, where he is now senior baseband engineer. Pederson worked at Infineon as a wireless software engineer until 2011 when the company was sold.

Jing’en Chen, who is now a wireless software engineer at Apple, worked at Infineon until 2011, when he became a staff engineer at Intel. Apple recruited him last year and he started work there in April of 2014, according to Chen’s LinkedIn profile. He’s based in Beijing.

One source said Apple hired these people to work on the collaboration with Intel from the Apple side. Another source said the hires are evidence of a desire on Apple’s part to pull in the expertise needed to bring the design of the modem chip in-house.

Actually, Apple has plenty of ex-Infineon wireless engineers working for it.

Christian Mucke was at Infineon for 10 years, and was VP and general manager there when Intel bought the company. In 2011, he moved from Intel over to Apple, where he’s now a senior wireless architect.

Another important piece of Intel’s LTE modem story fell into place at the end of September. Intel confirmed that it bought the CDMA modem assets of Via Telecom. Intel says it will use the technology to add CDMA network connectivity to its LTE modems.

While the Chinese market might be the main motivation for the Via Telecom buy, the technology could also be built into a future Verizon iPhone for the U.S. market. Verizon, too, uses a combination of 3G CDMA and 4G LTE in its network.

Intel’s mobile chip business is now a two-headed monster. It wants to continue selling low-cost LTE chips in medium-priced phones for developing markets, and it wants to double down on gaining a beachhead in the iPhone with its 7360 modem.

If that beachhead turns into a starring role in the creation of a new Apple SOC, Intel will have taken a large step toward being a major player in the mobile space, and a formidable opponent to Qualcomm.