Intel threw its research might behind the idea of autonomous cars, or automobiles that are safer and more efficient because they can take over the task of driving from humans.

Intel, the world’s biggest chip maker, will provide an “application ready platform” with its own processors and operating system for self-driving cars. The initiative is part of Intel’s larger campaign to provide the intelligence and connectivity for the internet of things, or smarter everyday devices. The effort will include Intel’s own research as well as investments in other companies from a $100 million car technology fund.

“We’ll arrive at completely self-driven cars because we’ll see an evolution over the next six to eight years,” Doug Davis, corporate vice president of Intel’s Internet of things group, said in a press briefing. “The platforms we are announcing today will serve as the foundation.”

The cars will have high-powered processors, the Tizen operating system, and connectivity for delivering Internet connections to and from the car. Davis said autonomous cars will have features similar to those that Google has shown off with its self-driving cars. Those include the ability to avoid accidents, alert the driver when someone falls asleep at the wheel or veers out of a lane, and display real-time information on traffic or schedules.

Intel will focus on both chips and software, as well as on additional investments and advanced technology research aimed at helping the car evolve to better inform, assist, and eventually assume control.

“Automobiles have integrated more entertainment and navigation,” Davis said. “They need to become connected so we can pull data out of the car about how we operate the vehicles, and also to bring more autonomous capabilities into the car as well.”

It will be up to car makers to decide whether they want to use the Intel branding in their vehicles. 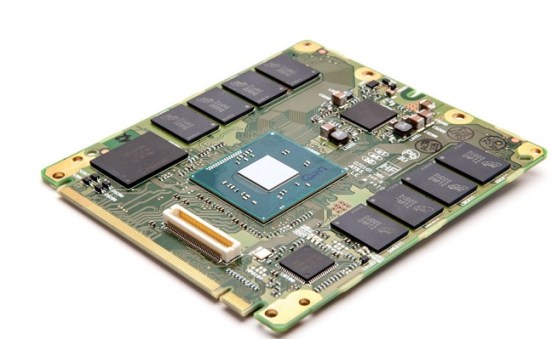 Intel calls its platform In-Vehicle Solutions, including both hardware and software. Intel will provide chips, hardware modules, a full software stack with operating system and middleware, and development kits. The company hopes it can cut in-car system development by a year and reduce costs up to 50 percent. Intel will use software from its own Wind River subsidiary as well as from Green Hills Software, Mobica, Symphony Teleca, QNX, and XSe.

Intel set up a car tech fund in 2012. So far, it has invested in ZMP, a maker of autonomous driving platforms; CloudMade, a data aggregation and cloud company; Mocana, a security platform provider; and Tobii Technology, which is doing eye-tracking research.

Intel’s first efforts will be products for driver assistance, and it will slowly work its way up to autonomous cars, as safety systems are perfected. Davis said the idea is to make cars adapt to us, rather than the other way around.

Intel said its Internet of things group had revenue of $482 million in the first quarter, up 32 percent, thanks to demand for existing car infotainment systems.