Meet Jimmy the 21st Century Robot. The artificial intelligence, or brains, of the robot is open source. So is the design and the technical description for printing him out as a 3D object. So feel free to clone the robot. Just don’t call him Jimmy too. 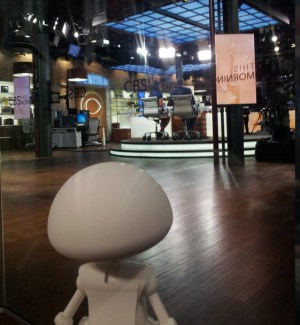 Above: Jimmy at Maker Faire

Jimmy is the creation of Intel researcher Brian David Johnson, a futurist who has been toying with the idea of the future’s robots for more than a decade. He is debuting Jimmy at the Maker Faire do-it-yourself tech expo in New York this weekend. These robots are going to be infinitely programmable, and very personal for each creator.

“We can come to see these robots as an extension of ourselves, and that these are platforms to create as many of them as we can,” Johnson said at the recent Intel Developer Forum. “Our motto is that every robot has a name.” 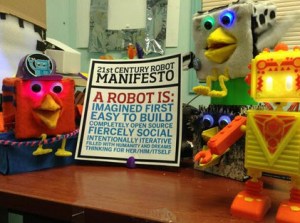 Johnson described Jimmy in a new book, which has a manifesto for what a 21st Century Robot should be. Jimmy is as programmable as a smartphone.

“It’s there and ready to use,” David Johnson said. “We are creating new ways of interacting with robots.”

You can download and install apps that others create for the robot platform as easily as you can install an iPhone app.

David Johnson said the robot will be available to buy for less than $1,000 in the coming months, and he is trying to get the whole cost under $500. David Johnson wrote a book called “21st Century Robot” with all of the open source files for printing the robot as a 3D object. The goal is ambitious, to make robots more personal. 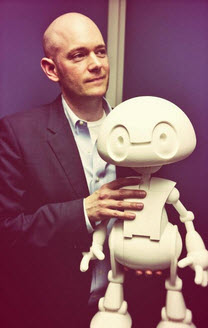 Above: Jimmy and his creator Brian David Johnson

David Johnson wants to hold robot Maker Faires around the country, sharing the design with people via robot kits. Jimmy will have a companion robot, Paul, that Jimmy can talk with.