Although engineers have anticipated mmWave’s potential design challenges, this year’s Mobile World Congress marked the first opportunity to see how 5G chip and device developers are actually addressing the issues. Unlike the lower 800MHz to 5GHz radio frequencies used in most wireless devices today, mmWave spectrum (including the 24-39GHz range) generally requires a “line of sight” between the transmitting and receiving devices — specifically, a straight line or arc without another physical object in the way.

Because of that, and because of the larger number of antennas required for 5G’s multi-input, multi-output (MIMO) transmissions, it’s challenging to nestle mmWave antennas inside any edges of a device that would potentially be covered by a user’s hand or leg. So even though Intel’s official photo of the prototype laptop (top) focuses on its decidedly normal-looking front, Engadget noticed that its back included two large, thick stands containing 5G components — at least antennas, and possibly the entire 5G modem. 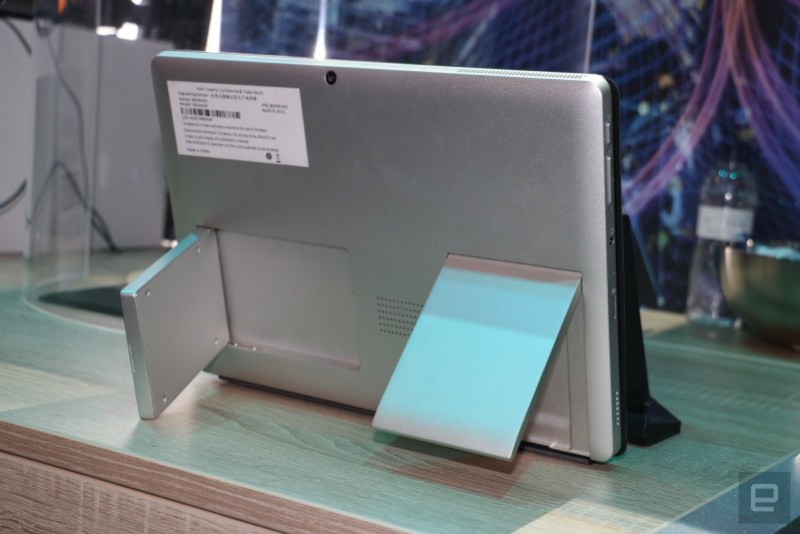 Intel indicated that the stand design was to help the computer minimize obstruction of 28GHz mmWave signals from a nearby base station. Under test conditions, the mmWave setup reached 4-5Gbps data rates, smoothly streaming a 4K version of Wonder Woman.

It’s worth bearing in mind that Intel doesn’t generally design finished laptops or tablets on its own, so its mmWave antennas are likely to be larger and more conspicuous than those implemented by developers. Moreover, the problem certainly isn’t only Intel’s to solve, as Qualcomm, Samsung, Huawei, and other 5G chipmakers are all saddled with the same antenna engineering challenges. And size-obsessed designers such as Apple would never abide external antennas like this — unlike Microsoft, Apple has resisted calls to include stands in its tablets, making this particular antenna challenge even greater.

Until there’s a way to put reliable mmWave antennas inside devices, it’s entirely possible that mmWave support will be mostly limited to larger 5G devices, including home broadband modems, standalone hotspots, and possibly select laptops. Most 5G laptops, tablets, and phones will use midband frequencies within the 3.5-6GHz range instead. That would reduce, if not eliminate, “you’re holding it wrong” controversies at the beginning of the 5G era, letting designers catch up with engineers who have been living with 5G’s new radio technology for years.