Gordon Moore appeared in person to talk about the 50th anniversary of Moore’s Law, the prediction he made that has fueled the tech industry and driven the engineering community to continuously improve the electronics that have become the foundation of our lives.

Moore, the chairman emeritus of Intel, appeared on stage with New York Times columnist and author Thomas Friedman. Moore ambled up on stage a little slowly, but he was still as sharp as you’d expect the cofounder of Intel to be. He had a melodic voice and a folksy style.

Intel chief executive Brian Krzanich introduced Moore at a gala event at the Exploratorium, a science and technology museum at Pier 15 in San Francisco.

“I was beginning to see in our laboratory that we would get more electronics on a chip, and this was an opportunity to get that message across,” Moore said. “I had no idea it would be so precise as a prediction.” 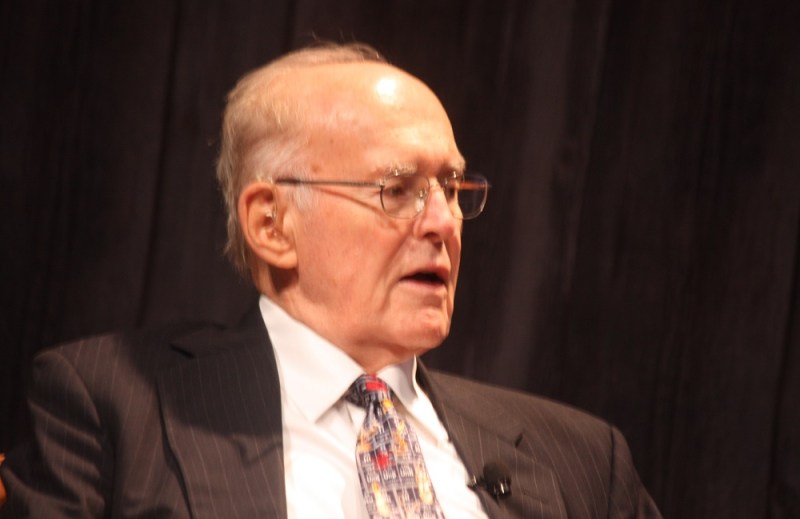 The original prediction was that the number of transistors would double every year. In 1975, progress had slowed a little, so Moore revised the prediction to double every two years.

The who’s-who of the chip world attended the event. They had a lot of bald heads or gray hair, but they made it out to pay homage to one of the inventors of the modern era. More so than anyone else, Moore defined and codified the pace of modern life. Moore’s Law worked like a metronome for Silicon Valley. If you kept up with it, you were successful. If you didn’t, the competition blew past you.

Moore made his famous prediction in the April 19 issue of Electronics magazine back in 1965. Friedman noted that Moore predicted just about every big tech gadget, save for microwave popcorn.

“Moore’s Law is an economics law, not built so much on physics and chemistry,” said Krzanich. “In a couple of years, we’re going to double the number of transistors on a chip. Eventually, we reduce the cost in half. When you do that, you improve the performance of the device as well.”

Today’s Intel Core i5 processor has 3,500 times the processing power of the first Intel microprocessor, the 4004. It has 90,000 times more energy efficiency and 60,000 times lower cost. If cars made the same kind of progress, you could go 300,000 miles per hour and your car would cost 4 cents, Krzanich said.

“That’s what we’re here to celebrate and recognize,” he said.

Asked what the biggest lesson of Moore’s Law, Moore said, “Once I made a successful prediction, I avoided making another.” The crowd laughed.

Extrapolating for ten years was pretty wild to Moore.

“The fact that it has gone on for 50 years was astounding,” he said.

He said Moore’s Law won’t last forever. But he said it would work for five or ten years if you apply good engineering. He said he hoped the industry wouldn’t hit a dead end. Many predicted that the industry would hit a standstill on progress decades ago. 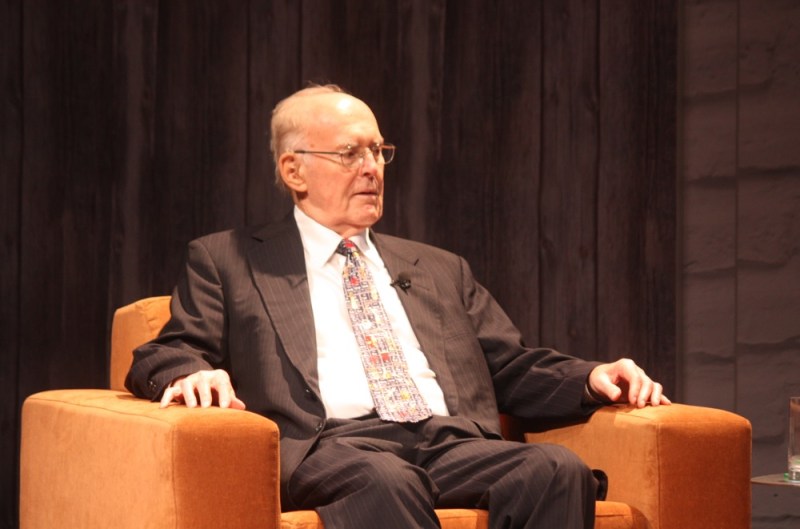 “I can’t see anything else that has gone on for such a long time with exponential growth,” Moore said.

Moore said he got interested in chemistry when he was young by playing with explosives that he created with his chemistry set. He played around with nitroglycerin and was on the road to making dynamite.

Moore said he is excited about the frontiers of tech such as robotics, which his grandchildren are working on.

“Our position in the world in fundamental science has deteriorated pretty badly,” he said. “Other countries are spending more on basic research than we are, and ours is becoming a lot less basic.”

Harvey Fineberg, president of the The Gordon and Betty Moore Foundation, said that in 1965, the U.S. was investing 10 percent of its budget in research and development, and now that figure is less than 4 percent. Intel, meanwhile, invests more than 20 percent of its budget in R&D. The U.S. produces less than a third of the scientific papers in the field of electronics now, Fineberg said.

The foundation is donating a lot of money to causes such as error-free medicine, marine biology, and DNA sequencing.

Asked what he wished he had predicted, he said, “I wish I had seen the applications earlier. To me the development of the Internet was a surprise. I didn’t realize it would open up a new world of opportunities.”

He added, “We have just seen the beginning of what computers will do for us. The evolution of machine intelligence. It is happening in incremental steps. I never thought I would see an autonomous vehicle driving on our highways.”

Friedman noted that a study last year said that 47 percent of jobs could be wiped out by automated technology. Moore said, “Don’t blame me for any of that.”

Moore is still humble. Moore said that for the first two decades, he couldn’t utter the term “Moore’s Law” because it was so embarrassing. After that, he was eventually able to say it with a straight face, he said.

Asked if Moore’s Law or Murphy’s Law were more popular on Google, Moore said, “Oh, Moore’s Law beats it by a mile.”