Skeuomorphism, at a basic level, means borrowing design concepts inherent to an old technology or approach while implementing new design.

Examples include  a “yellow pad” background representing notes section on a phone, a wooden bookshelf for the user interface of an e-book app, and so on.

Recent developments in the design industry are moving away from the skeuomorphic model.  User interface design in 2013 has hailed “flat” design as a way to create a perceived streamlining of information.  Flat design takes out the graphical look of different textures and shadows, to look like a simple, flat graphic, not an image of a camera or yellow note pad.

Apple is changing its entire design approach to this “flat” world with iOS 7 and Microsoft’s Windows 8 has taken a similar approach. But both ignore places where the skeuomorphic model is still critical to the usefulness of a technology.

In a phrase, the world is not flat. 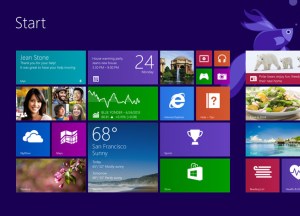 Above: The Start Screen on Windows 8.1

The idea of “flat” vs. “skeuomorphism” as an “either/or” approach is frankly, if you’ll excuse the pun, a bit one-dimensional. Design is driven by a combination of functional and aesthetic considerations, from the purest levels of form-following-function to the purely ornamental.

Supporters of flat design say skeuomorphism is solely aesthetic, and present flat as a presumably more functional choice. However, I believe there is a critical and often overlooked component of the functional in the skeuomorphic design approach. And that there is a time and place for both and in some places there needs to be levels of each.

Here are a few examples of people rushing to the new approach only to return to the skeuomorphic method — because of functional considerations.

Mechanical watches have been around since 1500s, mass-produced since the 1850s. At that time, functionally the mechanical design of the watch made the use of hour and minute hands a necessity.

Above: The Pebble smartwatch

The first electronic/quartz watches appeared in the early 1970s, more or less simultaneous to the advent of display technologies. Almost overnight, watches with hands were nowhere to be found, and the numerical “digital” display became the standard. People could tell time to the split-second and believed that their speed to read the time was improved.

But today, digital watches are almost a thing of the past.

If a wristwatch is worn today, an analog display is standard — particularly for upscale watches — and could easily be mistaken for the mechanical watch of 50 or 500 years ago. Once the thrill of innovation subsided, users found that the need to tell time to the split-second was less important than the ability to quickly mentally process the approximate time of day using the analog dials on the watch.

What they discovered was that reading the numerical display took longer for the individual to process in terms of the amount of time left in an hour.

Digital displays are still used in places where precise accuracy maters, but when speed matters and approximate assessment of time is enough, hands on a clock face are more efficient. For example, aircraft cockpit designers have found that it may take longer for a pilot to process numerical versus analog gauges — so even though in an aircraft these split seconds can matter, the analog (skeuomorphic) approach has remained on many gauges.

A similar functional skeuomorphic example could be found in a car.

If a driver has information on a fuel gauge indicated 2.69 gallons remaining, he/she may get bogged down by mentally having to compute the miles per gallon, make an assessment of the length of the drive, and then make a decision to go and get gas. With fuel gauge that simply shows “Full” and “Empty,” the driver could look at the gauge pointing towards E and immediately start to think about where to refuel.

So why does this matter today? How does the rush to “flat” design impact consumer use of computer technology?

Aesthetics are a matter of taste and could be debated forever. A look and feel of a digital interface will change over time. It is something that is inevitable and we will see shifts from one extreme to another.

However, functionality and usability on devices (phones, computers, and digital interfaces) directly impacts user productivity. The approach to design decisions that negatively impact usability should not be taken lightly.

Designers should not simply flatten designs arbitrarily, but also address the functional qualities of skeuomorphism on each design decision. With these considerations a balanced approach can drive the optimal design parameters.