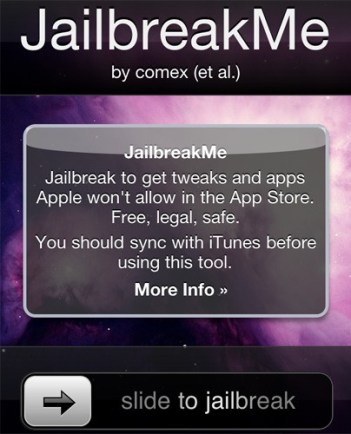 The moment many intrepid iPhone 4 owners have been waiting for is here: The iPhone Dev Team has released a jailbreak for the iPhone 4 via their JailbreakMe 2.0 tool — and this time around, users can perform the hack right on their device.

The jailbreaking process — which lets users run software not authorized by Apple, and was recently deemed legal by the U.S. Copyright Office  — is now dead simple. Users simply need to log onto http://www.jailbreakme.com on the iPhone’s web browser, and follow the on-screen instructions to jailbreak their device. It looks like the hack works on pretty much every device running iOS — including the iPhone 3G, 3G S, and iPad.

There are widespread reports that the servers for the hack are getting slammed right now, so the process may take a while longer than usual. According to Engadget, there were also issues with FaceTime and MMS being disabled after the jailbreaking process. But it now appears that Comex, one of the members of the iPhone Dev Team, has fixed those problems. For a list of jailbreaking tutorials, as well as the specific iOS devices and software version numbers that can be jailbroken, check out the coverage from Redmond Pie.

Despite Apple’s constant and tireless attempts to stop the jailbreaking phenomenon, it’s now legal, and easier than ever. Given the popularity of the iPhone 4 and the sheer simplicity of this hack, it’s obvious that even more iPhone users will be jailbreaking their devices. (Jailbreaking will still void your Apple warranty, so take note. But as mentioned below, restoring your phone to iOS should make the jailbreak undetectable to Apple.)