Even if you’re disciplined about wearing a fitness tracker every day to track your steps and sleep, there’s a good chance you haven’t gone the extra mile and started tracking your food.

While so much of our health tracking today is fairly automated, food tracking is still something you need to do manually, and it’s often unclear why you need to be doing it in the first place.

That’s a problem Jawbone is tackling directly with the latest app update for its Up fitness band, which is launching today on the iPhone (and eventually on Android). The company has completely revamped the food tracking experience on the app, making it easier for you to log what you’re eating and drinking, judge the quality of food with a simplified “Food Score,” and learn about your eating habits with a dash of data science.

Jawbone has also added a new weight goal feature to its Up app, which gives you the ability to track your daily weight progression alongside your food tracking data. 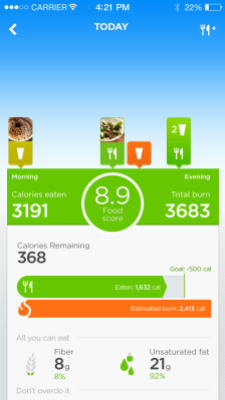 “The reality is that behavior change is hard, and there aren’t many good tools to manage that process of managing your weight,” said Travis Bogard, vice president of product management and strategy at Jawbone, in an interview with VentureBeat.

Jawbone already had some food tracking capabilities in the Up app, but they were fairly basic compared to what’s launching today. I’ve been using an Up band religiously for the past few years, and even I never felt the need to log what I’ve been eating.The revamped health tracking feature, on the other hand, is something I’m actually interested in using.

The big food tracking update is based on technology from Nutrivise, a nutritional tracking company Jawbone quietly acquired last year. Laura Borel, Nutrivise’s former CEO and now Jawbone’s head of product for nutrition, notes that you don’t even have to track every single thing you’re eating. Plugging in just a few meals a day could still lead to some helpful advice from the Up app.

The Up app can now highlight food that you’re most likely eating, based on the time of day and what you’ve eaten in the past, making it easier to track food quickly. Jawbone has also partnered with some online food services, including HealthyOut, Munchery, and PlateJoy, to automatically plug in nutritional information from meals you’ve ordered.

Bogard wouldn’t comment on potential plans to integrate nutritional information from restaurants using GrubHub and Seamless for their online delivery, but I wouldn’t be surprised if we see that soon. HealthyOut already uses the GrubHub Seamless API to highlight healthy restaurants, and GrubHub Seamless is also the biggest online delivery firm in the US after the recent merger.

It’s clear that Jawbone put a lot of thought into how it implemented food tracking. The new Food Score, for example, is a glanceable way to quickly judge the quality of food items without diving into the nutritional label. Jawbone determines the score based on the ratio of good elements in a particular item (like protein and unsaturated fats), compared to the amount of bad things.

The Food Score shows up throughout the Up app, which means it’s hard not to see that Snicker bar that killed your score for the day. Borel tells me Jawbone employees were surprised to discover that the brand of yogurt they usually ate in the morning had very low scores, mostly due to huge amounts of added sugar. After seeing the score, they shifted over to a healthier yogurt option with real fruit and no added sugar.

Now that Up is smarter about tracking your food intake alongside your steps and sleep, Jawbone has also revised its Insights feature, which are basically short tips that could help you live healthier. The app now highlights Insights right on your Up home screen, and there are also a slew of new tips around food.

It may seem like a small feature, but Bogard believes Insights is what truly differentiates Jawbone from everyone else involved in health tracking. It’s easy for companies to implement sensors in their devices to track loads of data, but it’s rare for them to spend the extra time to tell consumers why that data actually matters.

Jawbone may not be an outlier for too long, though. Apple recently announced its own Health app and Healthkit platform, and given its typically thoughtful approach to technology, I wouldn’t be surprised if Apple is similarly focused on revealing actionable intelligence around consumer’s health.