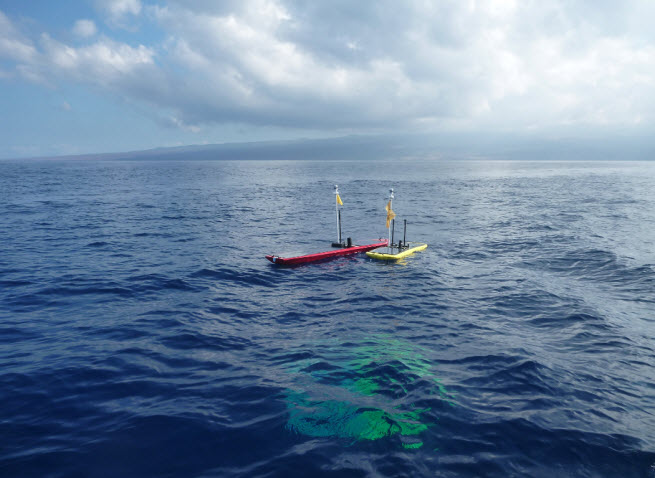 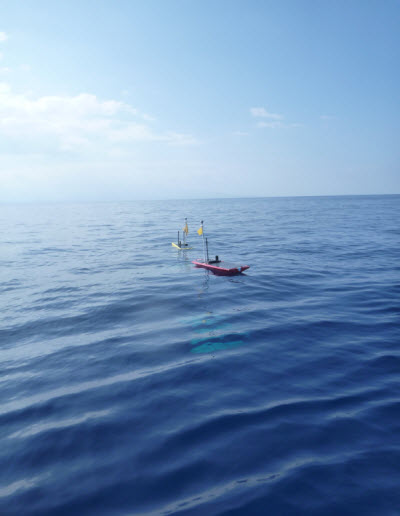 Liquid Robotics is revolutionizing our understanding of the oceans with its unmanned sensor robots. And today, the company is announcing a new version, dubbed the Wave Glider SV3, with advanced capabilities such as a hybrid propulsion system.

Roger Hine, chief technology officer at Liquid Robotics, told VentureBeat the new model can use solar power for propulsion. The earlier models used wave energy for propulsion and solar power for sensors and communications. The new solar cells for the robot are 50 percent more efficient, allowing them to power the propulsion system.

Sunnyvale, Calif.-based Liquid Robotics gained a spot in history when it announced in December that Papa Mau, one of its data-collecting second-generation Wave Gliders, had floated more than 9,000 miles across the Pacific Ocean.

Wave Gliders can collect data on weather in remote locations. They can be used to monitor hurricanes, predict tsunamis, and monitor rare marine life. Wave Gliders collect data on temperature, winds, humidity, wind gusts, water temperature, water color, and water composition. They can also take pictures. These robots are gathering a lot of observational data about climate change, ocean acidification, fisheries management, hurricane and tsunami warnings, and exploration — but in a green way.

The new model will cost $300,000, while the earlier one (the Wave Glider SV2 launched in 2009) cost $175,000. With the additional horsepower, the new Wave Glider models will be able to stay in one place better, despite strong ocean currents. Or they will be able to travel to a destination faster in any weather condition.

“It is still primarily a wave-guided vehicle, but when the waves are low, that is usually when it is sunny,” Hine said.

The company was started in 2007. It has raised $85 million to date from investors including VantagePoint Capital Partners, Riverwood Capital, and oilfield services firm Schlumberger. The company is headed by Bill Vass, a former Sun Microsystems executive. He made headlines last year when he recruited Java programming language creator James Gosling as chief software architect. The company has more than 120 employees and has a test facility on the Big Island of Hawaii in Kamuela.

“The SV3 is a tremendous step forward in terms of what we can accomplish in the ocean and gives customers a competitive advantage to capture data in the most challenging ocean conditions,” said Vass in a statement. “By providing the ability to deploy Wave Gliders across most of the planet and deliver ocean data in a new and cost-effective way, weʼre enabling broad access to affordable ocean exploration.” 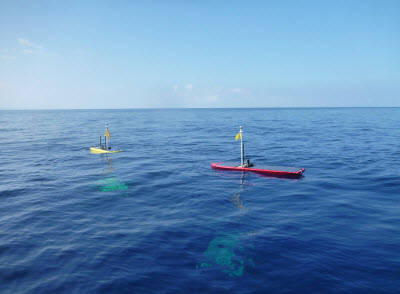 The earlier SV2 robots have now traveled more than 300,000 nautical miles around the globe. More than 200 have been deployed from the Arctic to Australia, from the Canary Islands to Loch Ness. To date, none have been lost at sea, but the robots have been through a total of 10 hurricanes. The SV3 series will be available in the third quarter.

Hine said the new robots weigh less and have adaptable modular power systems that can accommodate power-hungry payloads such as sonar, bathymetry, and image analysis. The devices also feature the Regulus operating system for autonomous vehicles, which allows for coordinated fleet operations. The OS is built around an open, cloud-based architecture for massive scalability and secure multi-tenancy. It can dynamically download software changes or new apps while at sea. It can also transmit data to satellites or via cellular or Wi-Fi.

The new Wave Gliders use ARM-based processors running on Linux. The software is written in Java. The devices use lithium-ion batteries.