Livescribe has teamed up with Moleskine to make a line of fancy notebooks that will be compatible with Livescribe’s smartpens. 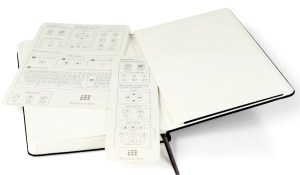 The new notebooks are designed to combine the intuitive feel of pen and paper with the decidedly nerdy digital technology of Livescribe, which makes your scribbles interactive so that you can tap on a handwritten sentence and listen to the words that were being spoken at the time you wrote it.

Oakland, Calif.-based Livescribe’s smartpen has been around since 2008 and now has several types of models. The smartpens capture your words and allow you to annotate them and turn them into digital data. They are targeted at serious note takers like business professionals and students.

“There’s something magical about writing on paper with a pen, it opens up your imagination and allows you to expand your thinking beyond the constraints of a keyboard,” said Gilles Bouchard, CEO of Livescribe, in a statement. “With these new Moleskine notebooks and a Livescribe smartpen, you can tap into that inspiration and store everything on your digital devices too.”

The company can transfer your data to cloud services. Livescribe makes it a lot easier to back up your important notes. Once the data has been securely stored in the cloud, it becomes easily searchable and can be played back, organized, and shared. The target audience is on-the-go people, from executives to students. Those individuals don’t have to choose between writing on paper or writing on a tablet, as the Sky smartpen allows them to write an image on paper and have that image appear automatically on a tablet.

With Livescribe, you write your notes on a special type of paper that records the strokes in digital form. That data is recorded on the smartpen’s flash memory drive, and when you use the pen to tap on the words later, you can play back the audio recording from that moment in the recording. That makes it easy to find the right spot you want to listen to in the captured audio. Livescribe can also automatically transfer what you’ve written on paper to a tablet’s touchscreen.

Milan, Italy-based Moleskine has designed some new notebooks that combine its “iconic design” with the smartpen technology. Those notebooks have classic design details, including familiar round corners, a ribbon bookmark, elastic closure and the “In case of loss, please return to …” label on the flyleaf. The Livescribe versions include an expandable inner pocket containing two bookmarks printed with smartpen buttons and controls. The paper is ivory-colored and acid-free.

“Far from disappearing, handwriting is developing into new forms,” says Maria Sebregondi, co-founder and vice president of brand equity and communications at Moleskine. “Whereas once it relied on a quill and inkpot, now we use roller pens, spray cans, or smartpens to capture our thoughts. We’re creating tools and services which bridge analog and digital methods for a more seamless experience. The Livescribe notebook is a further step in that direction, building on our previous partnerships with digital companies.” 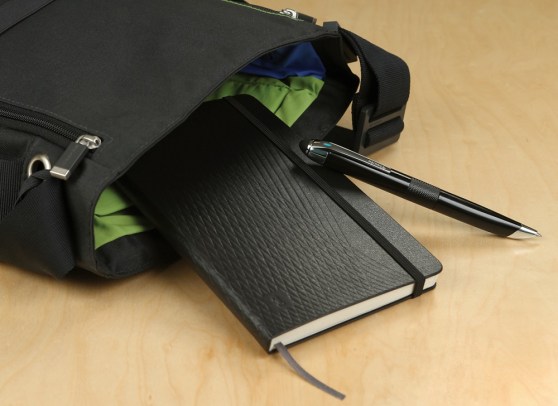 Above: Moleskine Livescribe notebook and smartpen.