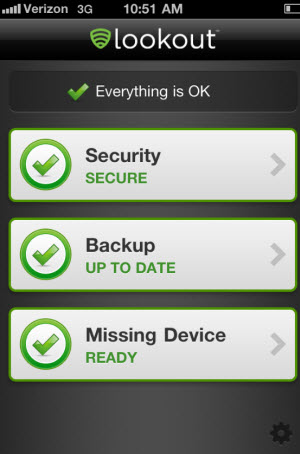 After two years of development, Lookout Mobile Security is launching a security app to protect iPhones. The app doesn’t protect against malware, since Apple has handled that task pretty well. But it does protect users from other bad things that can happen to their iPhones.

For instance, the app warns users when they are using unprotected WiFi wireless networks and instructs them not to send their usernames and passwords over the network while they’re on it.

“We’re providing security protection so that you know your data is safe,” said Kevin Mahaffey, chief technology officer at Lookout Mobile Security in Mountain View, Calif. “We took a while to make this, but we wanted to make sure we provided a worthwhile product. Historically, malware has not been a problem on the iPhone. But we found some areas where consumers need protection.” 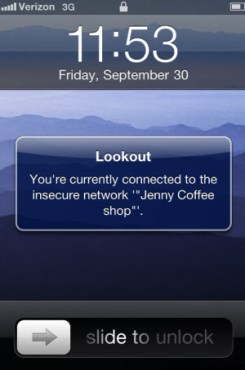 The app also provides backup for the user’s contact list. It doesn’t yet provide protection for photos or videos, but that might come in future versions. The app also protects users against lost phones by helping them locate their phone if it is lost or stolen. Lookout also tells you if there are updates to be downloaded; often, such updates improve the device’s security.

Mahaffey said that Apple has had much better security on its iPhones because it curates the App Store, making sure that any apps with malware don’t make it through testing. Google, by contrast, allows anyone to upload apps to the Android Market. Users are informed if the apps are using parts of the phones that have sensitive data, such as contacts. That’s why Lookout Mobile Security created its first smartphone app to protect Android phones from malware. 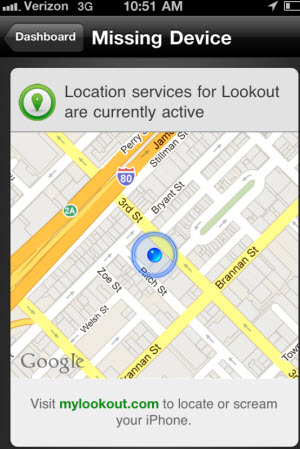 The reality is that there are still ways for iPhones to be compromised. That’s not good because smartphones are becoming security risks and are as important as some users’ personal computers when it comes to holding personal information.

The system advisor on the app tells you if your settings could put your privacy at risk or if your software is out of date. It also lets you know if your iPhone has been “Jailbroken,” or had Apple’s security circumvented. The service also tells you if your apps are using any location services that give away your location.

“People have heard a lot of stories about jailbroken phones and they need to be reassured about that,” Mahaffey said.

The backup and restore function will let you back your data up over the air. It will also restore your data to the same iPhone, a different iPhone, or an iPad.

Lookout already protects more than 12 million users with its Android app. Those users are on 400 networks in 170 countries. The app is available on Verizon, Sprint and T-Mobile phones. Right now, the app is free. It’s possible the company may issue an app with premium features in the future.