OpenStreetMap (OSM) data is being given a notable boost this week — a major GPS navigation app provider has announced that it will let users edit OSM data directly within its own mobile apps.

Launched out of Zurich, Switzerland in 2011, Maps.me has emerged as major contender in the online maps and navigation realm, and it now has tens of millions of people using its Android or iOS app to access offline maps around the world. This is what led to Russian Internet giant Mail.ru’s acquisition of the company back in 2014. The deal was part of a push to not only grow Mail.ru’s footprint outside its native Russia, but to also help it compete directly against Google and Apple Maps.

For its maps, the company uses OpenStreetMap, which is an open, editable platform. In fact, it’s often referred to as the “Wikipedia for maps,” as anyone, anywhere in the world can contribute to the data. While it doesn’t always garner the same fanfare as others in the space, OpenStreetMap is actually one of the four major online mapping platforms, alongside Google Maps, TomTom, and Here — the latter of which was sold by Nokia to a consortium of car companies last year.

Founded out of the U.K. in 2004, OpenStreetMap is managed by the OpenStreetMap Foundation, a not-for-profit organization that survives largely on donations and contributions from the public and institutions. It’s completely free, and a number of well-known apps make use of OSM maps and data, including the Telenav-owned Skobbler and MapQuest. Other major companies that use some OpenStreetMap data include Foursquare and the mighty Apple. So one of the reasons OpenStreetMap doesn’t really live in the limelight on its own is because it’s not really a go-to destination in its own right — it’s more of a back end, an API for third-party developers to tunnel through for their own apps.

Most OpenStreetMap editing is carried out through its website, though there are some third-party editing apps available on mobile. What Maps.me is bringing to the table, however, is scale — OpenStreetMap is now front and center for millions of people who will be able to edit data within the app. And, quite probably, they’ll have no idea that it’s OpenStreetMap they’re editing, because most people don’t really care who their map providers are.

There are some notable caveats to Maps.me’s latest offering, however. For now, you can only edit data about specific places and points of interest, such as stores, homes, restaurants, bars, and so on. You can also add new places — so if, for example, that new Sushi bar ’round the corner isn’t yet mapped, you can add it yourself. You can also add business details, including opening hours, phone numbers, Wi-Fi availability, and so on, the type of information you might find when searching for places on Google Maps. You won’t be able to edit street names or add new roads. 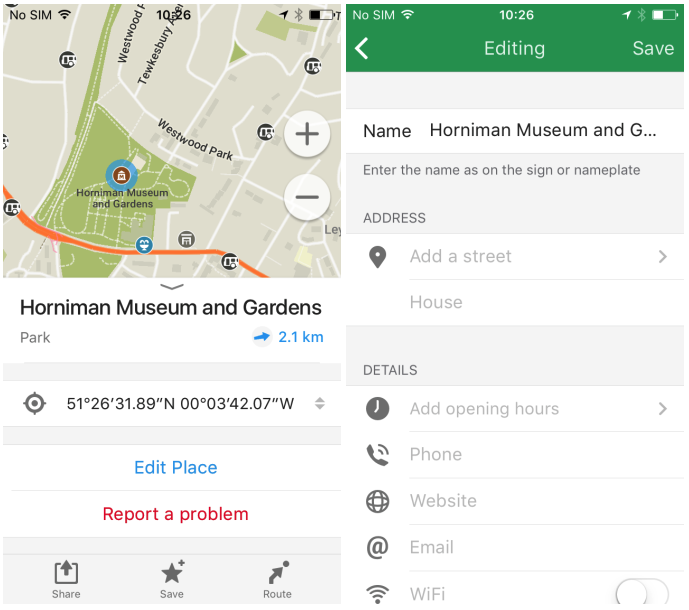 Just as a core selling point of Maps.me’s offering is offline maps access, you can use the new editor offline too. All changes are saved locally and uploaded once an Internet connection is re-established.

“Maps.me accuracy and relevance directly depends on the number of users taking part in map editing. We strive to develop the OpenStreetMap community and want every user of the application to have an opportunity to share their knowledge,” said Yuri Gurski, vice president of new product development at Mail.ru. “We expect that the launch of this feature will significantly expand the editor base, which not only will make the maps even more detailed, but also will shift the primary focus from sketching maps using satellite photographs to filling and updating the base of objects.”

Only time will tell whether the Maps.me user base will be keen to edit locations, but if history has taught us anything, it’s that people love getting involved in creating and editing products they care about. And focusing on the hyperlocal — encouraging users to edit and add places in their own community — should serve as a major draw. And it’s certainly far more convenient than asking users to edit through the main OpenStreetMap website.