Commuters the world over face the perennial problem of how to optimize their journey to work: What time should I leave? Is the connection running on time? Will bad weather mean the train’s too full? Am I better off just taking the car?

One solution for many workers is to travel by bike — it’s easier to create a consistent travel time for starters, with traffic, weather, and other unforseen delays having minimal impact for nimble two-wheeled travelers. It’s estimated that at least 200,000 people cycle through New York alone each and every day, a figure similar to London, which is testament to the practicalities of bikes when traversing large conurbations.

It’s against this backdrop that Jivr is looking to make its mark, with a new chainless, folding, electric/mechanical hybrid bike. The company’s Kickstarter campaign is due to end next week, but it has already smashed its £70,000 ($100,000) crowdfunding target. VentureBeat met with the London-based creators this week to get an exclusive “hands-on” with the bike they hope will revolutionize city-based cycling. 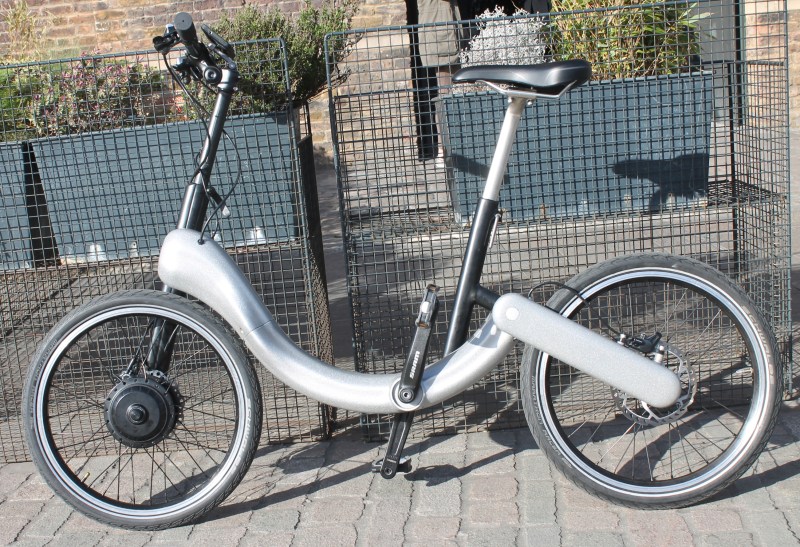 Jivr’s motor is located on the front wheel and promises around 20 miles per charge, depending on how many hills you climb; the charge takes around 90 minutes from empty. It will travel at up to 16 miles per hour (MPH), which keeps it at the lower end of the speed spectrum and means you don’t require a driver’s license or helmet (though you should wear a helmet anyway).

The motor is powered by flicking the throttle on the handlebar, and when you want to conserve battery or if, indeed, you run out of battery, the chainless technology that’s located inside the frame can be powered by the pedals. To charge the bike, you simply plug it into a standard mains outlet.

Though chainless bikes aren’t a new concept, Jivr founder and CEO Marcin Piatkowski tells VentureBeat that the patent-pending mechanical chainless drivetrain in his bike is unique, but can’t reveal exactly how it works yet.

The “chainless” facet of the bike is a key selling point for commuters. One of the hazards of using traditional bikes is that the chain can slip off, causing delays and messy, oily hands. It can also be easy to inadvertently touch the chain with one’s shoes or trousers, thus creating oil marks on them. What Jivr is trying to create is the ultimate bike for city-dwellers — the built-in motor means a rider won’t work up a sweat on the way into the office in their shiny clean suit, while it can also be folded so it can be taken to a desk, on a train, or wherever.

At 33 pounds (15kg), the bike isn’t the lightest — certainly, it felt a little hefty when we picked it up. That said, it isn’t so heavy for someone who simply wants to lift it down a flight of stairs or onto a train. It can also be packed into its “carry” mode in a matter of seconds. 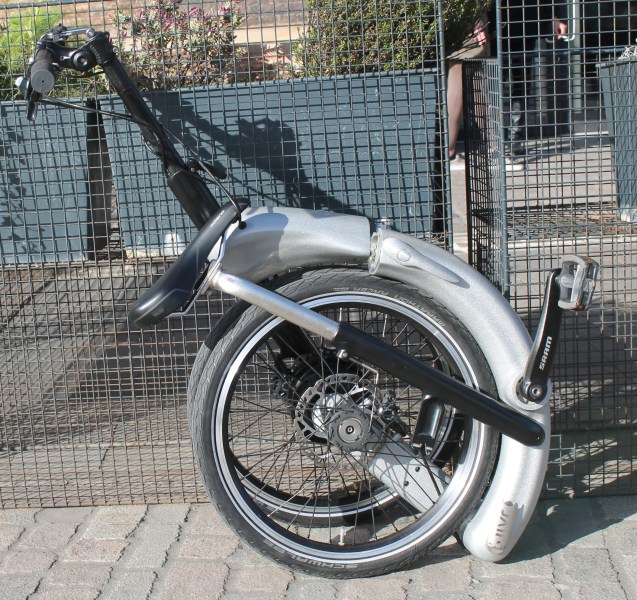 There is already a big market for portable, compact bikes — this has been proven by the likes of Brompton, a London-based company that peddles (pun intended) foldable bikes in their droves. The market for e-bikes is growing too, powered by companies such as Smart, with sales surging in Europe.

What Jivr is striving to do is blend two worlds — merge Brompton with Smart, and remove the chain in the process.

There are similar offerings out there in the wild already, such as Mando Footloose. Rather than the pedals powering the actual bike, on the Footloose they’re used to recharge the on-board battery to gain a little extra power. However, if the battery dies, you’re pretty much going to have to wheel the bike home.

By offering a true hybrid, Jivr strives to cover all bases. Going downhill or on the flat, you can pedal or use good ol’ gravity. On the uphill or if you’re just plain tired, you can flick the throttle forwards. Perhaps one downside is that if the bike does run out of juice, you’ll suffer if there are steep hills — this baby doesn’t have any gears.

By shipping its bike this September, Jivr is hoping to get first-mover advantage, as a number of big brands are known to be working on products in this realm, though they’re mostly still in the concept/prototype stage. BMW, for example, has previously revealed the i Pedelec, which is almost identical to the Jivr, except it uses a chain.

Based on VentureBeat’s tests, the Jivr is an excellent piece of kit — it worked flawlessly and serves to fulfill a genuine demand. But it all comes down to price, right?

Early Kickstarter backers can get their hands on a Jivr for around £700 ($1,050), which is actually very good value for money, but the full final cost when it goes to market is expected to be around the £2,000 ($3,000) mark. Compared to the non-motorized Brompton, that’s roughly double the price — but perhaps that’s the cost of oil-less, sweatmark-less clothes. Compared to the rest of the e-bike market, it’s also roughly in the same ballpark — Smart offers a standard e-bike for £1,800 ($2,660).

It’s also worth noting here that the Jivr has iBeacon technology built in, and the company plans to open up to developers so that the bike can interact with the world around it. The bike actually has a built-in smartphone dock on the handlebars too, which is compatible with most modern smartphones.