Microsoft today ended support for old versions of Internet Explorer, including IE8, IE9, and IE10, as well as Windows 8. For the browsers, the company has also released a final patch (KB3123303) that includes the latest cumulative security updates and an “End of Life” upgrade notification.

End of support does not mean the software stops working. When a given deadline is reached for its software, Microsoft simply stops releasing security updates and offering technical support.

For Windows 8, users can simply upgrade to Windows 8.1. Microsoft’s support life-cycle policy treats Windows 8.1 like a service pack, even though it is branded an operating system upgrade that delivers additional features, not just improvements.

Today’s move means Microsoft only supports the latest version of IE for any version of Windows. In most cases, that’s IE11, which ships with Windows 8.1 and Windows 10. Although Microsoft wants its users to move to Windows 10 and the new Edge browser, it can’t just push everyone to the latest and greatest overnight.

Although Microsoft offers instructions for disabling the upgrade notification, we don’t recommend it. Avoiding upgrading should be an absolute last resort.

While support for Windows 8 has ended, Windows 8.1 will have Mainstream Support until January 9, 2018 and Extended Support until January 10, 2023. Mainstream Support includes free incident support, warranty claims, and fixes for non-security as well as security bugs, plus design changes and feature requests. Extended Support consists solely of security updates. 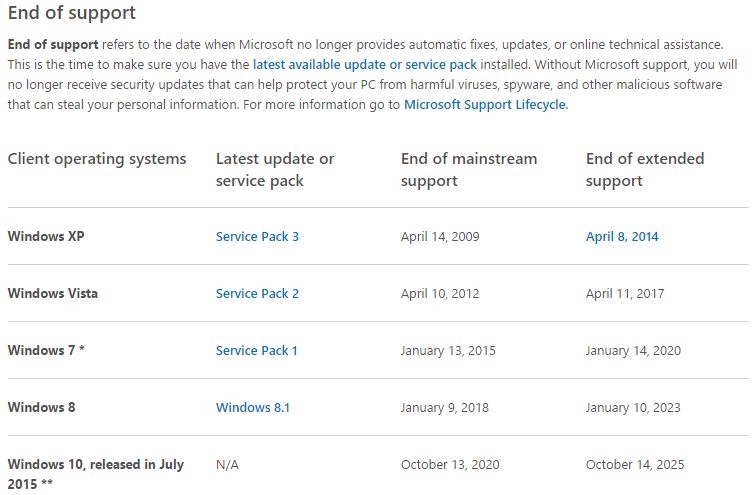 According to Net Applications, Windows 8 finished 2015 with 2.76 percent market share, while Windows 8.1 held 10.30 percent. Together, they owned 13.06 percent of the market at the end of December.

Windows 10, meanwhile, has about 10 percent of the desktop market. According to Microsoft, over 200 million devices are running Windows 10, though that includes not just PCs, but smartphones, consoles, and other devices as well.

The tricky part here is that Windows 8.1 is required to take advantage of Microsoft’s free upgrade to Windows 10. So if you’re still on Windows 8, you’ll have to upgrade twice to get the latest and greatest from Microsoft. But at least it won’t cost you anything.

In short, if you’re using any of these old versions, get the latest release currently available to you. Once you’ve done that, make a point of upgrading to Windows 10 and Microsoft Edge.